dark mode
Tour of the Summer Palace: Beijing, China
January 11, 2012
We arrived in Beijing on January 4 and had a few days for sightseeing before the wedding on January 7. Jessica's Uncle John, the groom's father, arranged a number of bus tours for visitors to see the sights of Beijing. We skipped the Great Wall having done that during our visit in 2010, but caught a ride with the city tour headed to the Palace Museum and the Summer Palace. The Palace Museum is the proper name for the Forbidden City, and since we had seen that already, we split from the group and took a detour through Tiananmen Square to visit the Qianmen Shopping Street. I shared some photos from this excursion in my previous but brief post here Ni Hao from Beijing, China!.

The Qianmen Shopping Street was built in response to criticisms of Beijing's city government that had been leveling vast tracts of historic structures in the name of progress and development. Much of the classic character of the City's neighborhoods had been lost and more were disappearing daily. Although new, the shopping street seeks to emulate Beijing in the 1930s. Its well done, but it has a bit of a "Main Street Disney" feel. The larger spaces are mostly chain stores like Zara, H&M and Starbucks, while the rest are tacky souvenir shops. Its a nice gesture toward historic preservation, but its a campy substitute for the real thing.

After walking the length of the street and getting a coffee (at Starbucks), we walked through Tiananmen Square toward the Forbidden City to meet up with our tour group. We decided it would be easiest to walk to the South Gate, rather than endure the hassle of a bus or taxi. Like everything else in Beijing, the Forbidden City is ginormous. We walked and walked and walked...all the way from the Mao Mausoleum to the South Gate. 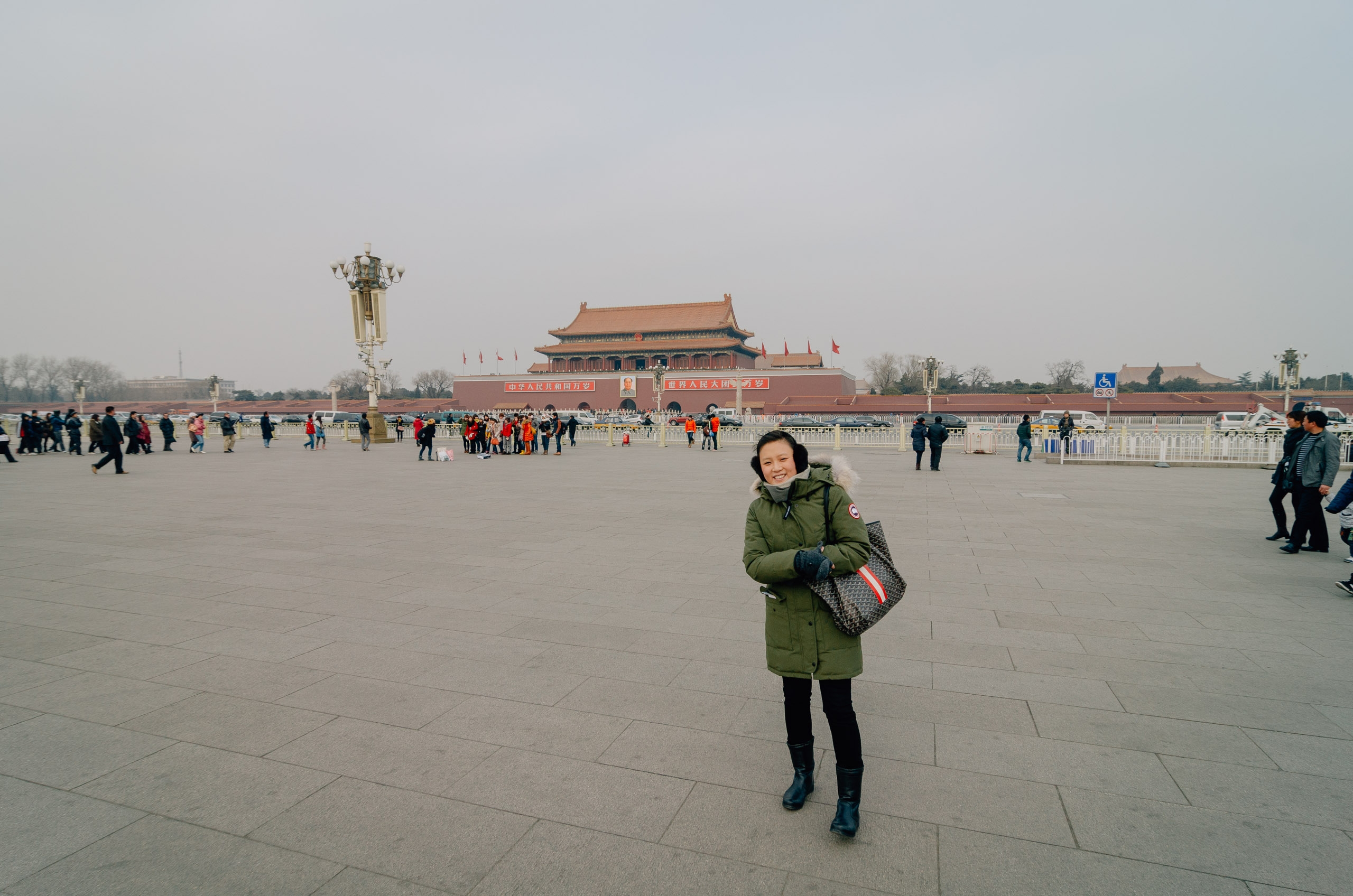 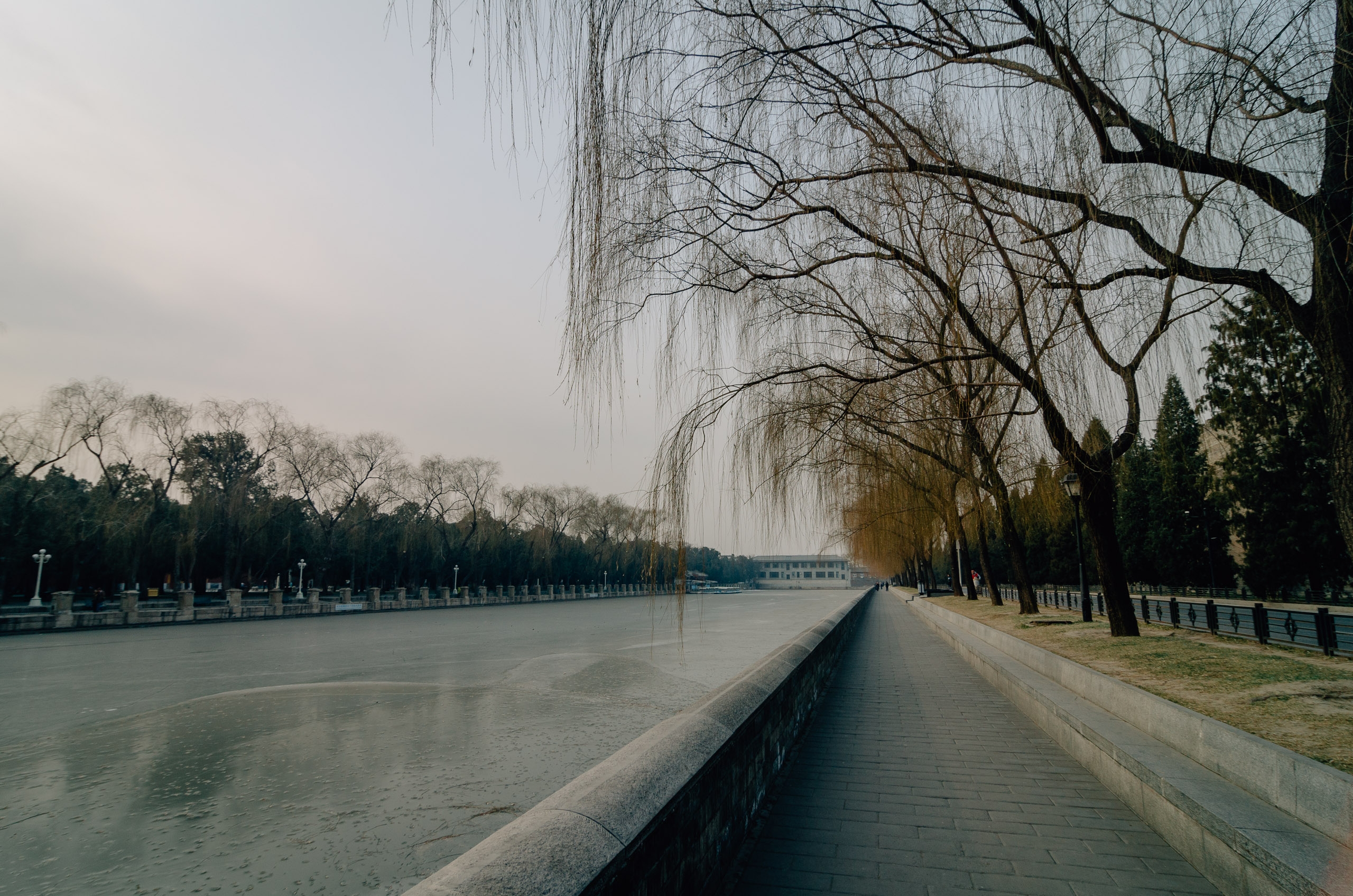 The long, long walk around the Forbidden City

After about an hour of walking, and by that I mean power walking, we finally met up with our group and set out for the Summer Palace. We were running behind schedule, so we decided to forego the planned sit-down lunch and stop the bus at a KFC instead. Perhaps it was my fatigued, jet-lagged, frost-bitten state, but the food was quick, cheap and quite delicious. Moreover, the bathroom was amazingly clean, which can't be said for many public (or private) restrooms in Beijing.

We arrived at the Summer Palace around 1:30. Our tour included tickets to the grounds, but strangely not for the Palace itself. Because of the cold, crowds were light and we took a leisurely stroll around the lake and gardens. 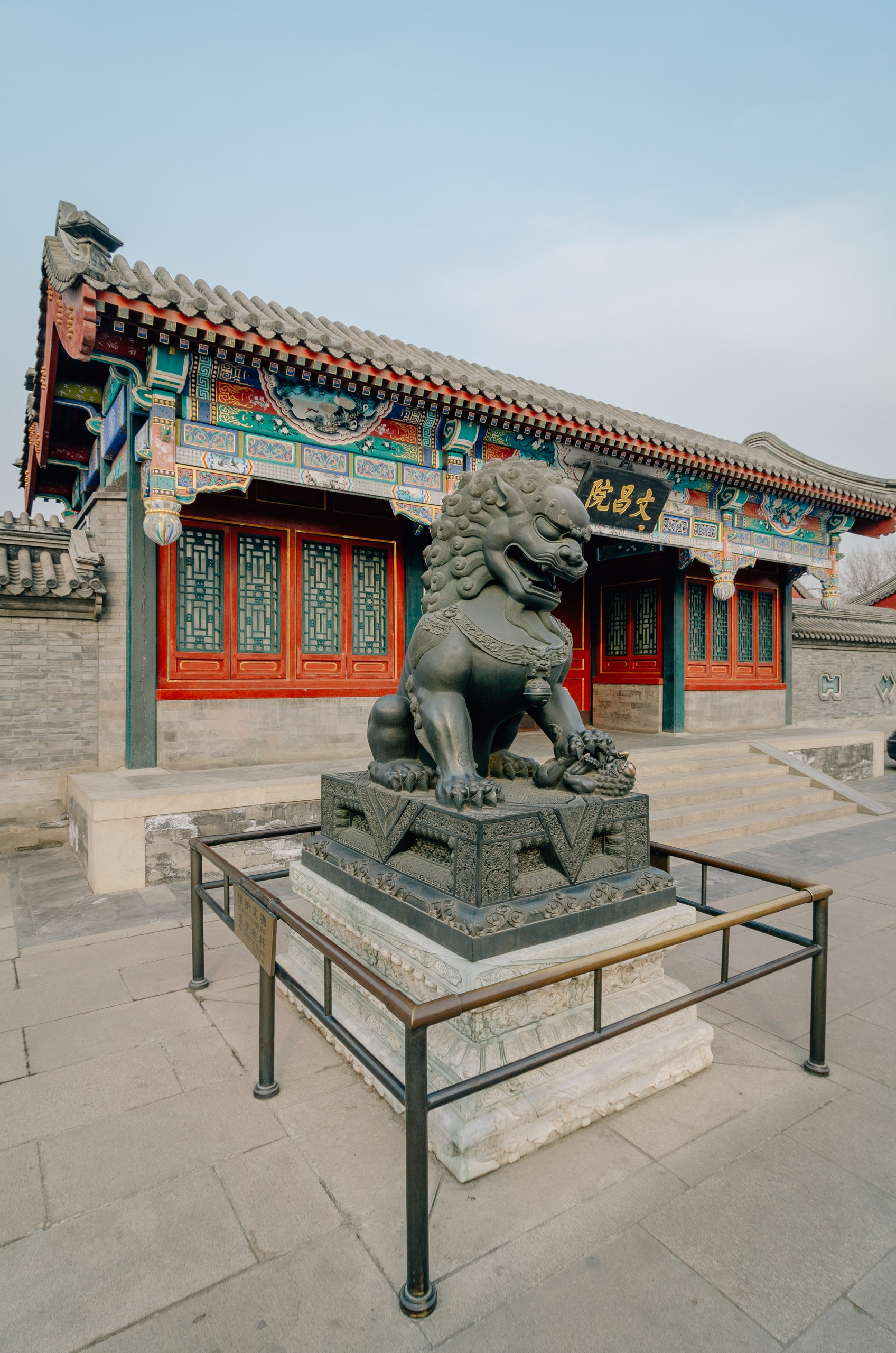 The Summer Palace was built around 1100AD after the Imperial capital was moved to Beijing. Although close to the city center today, it was considered the pastoral countryside at the time of its construction. The grounds consists of a huge lake along the shore of the 200-foot high Longevity Hill. What's fascinating about this setting is the lake is entirely man-made, dug by hand and excavated by ox-pulled carts. The purpose of this was two-fold: built a magnificent lake, and use the earth to construct a 200 foot hill upon which to build a castle. I don't know how many people were involved in this process, but it was easily completed during the Emperor's lifetime. Its a remarkable feat of engineering. 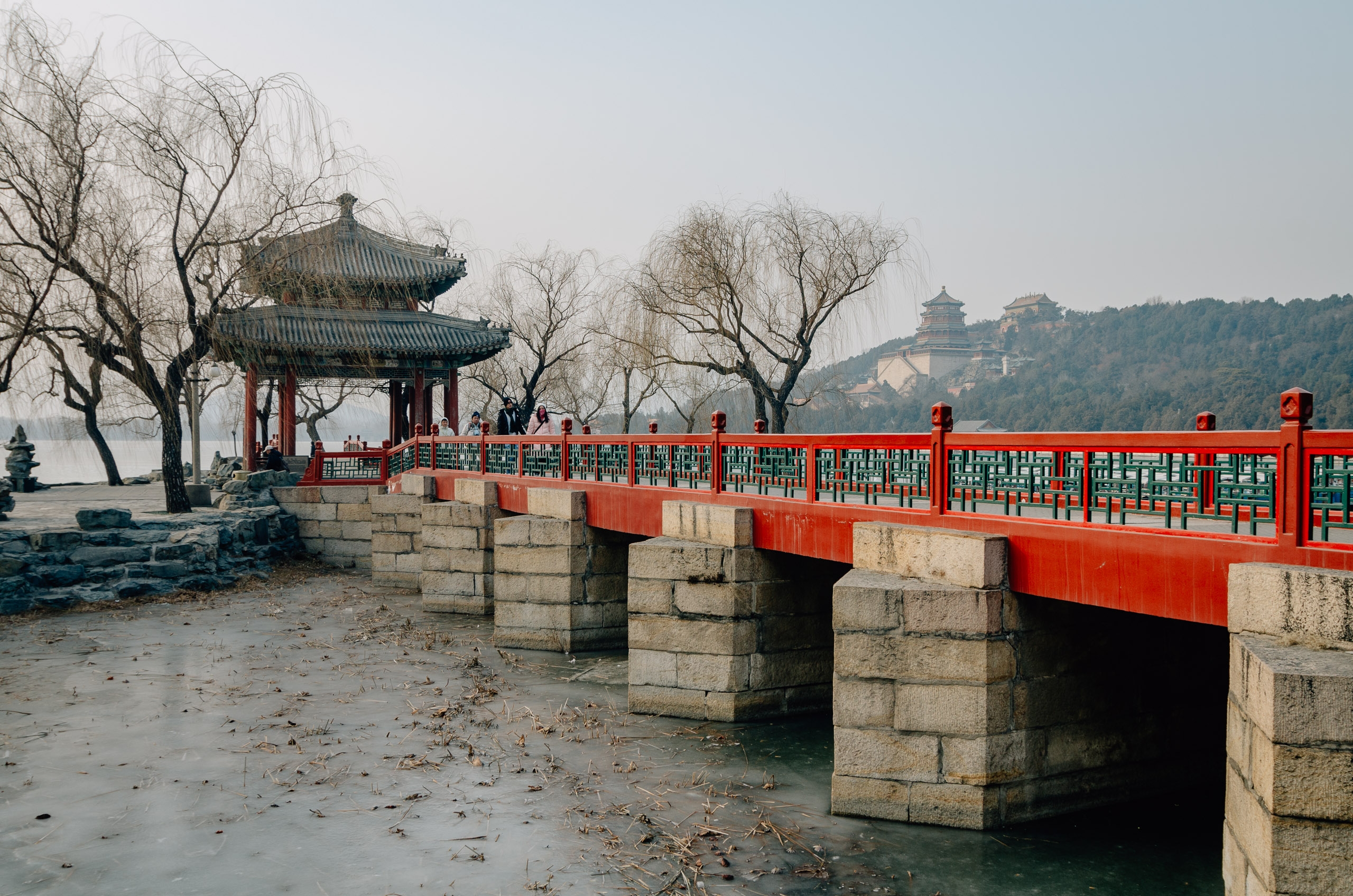 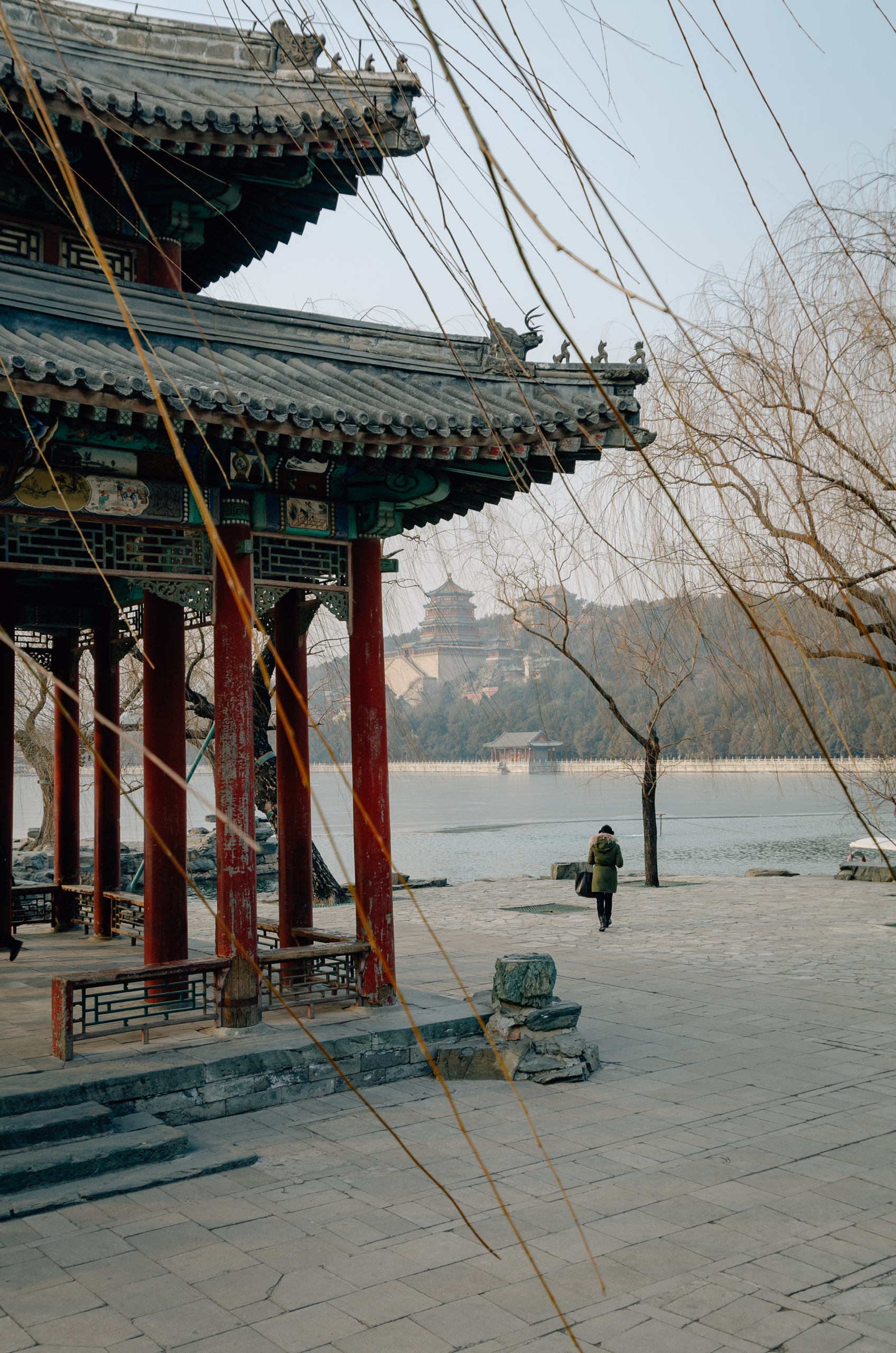 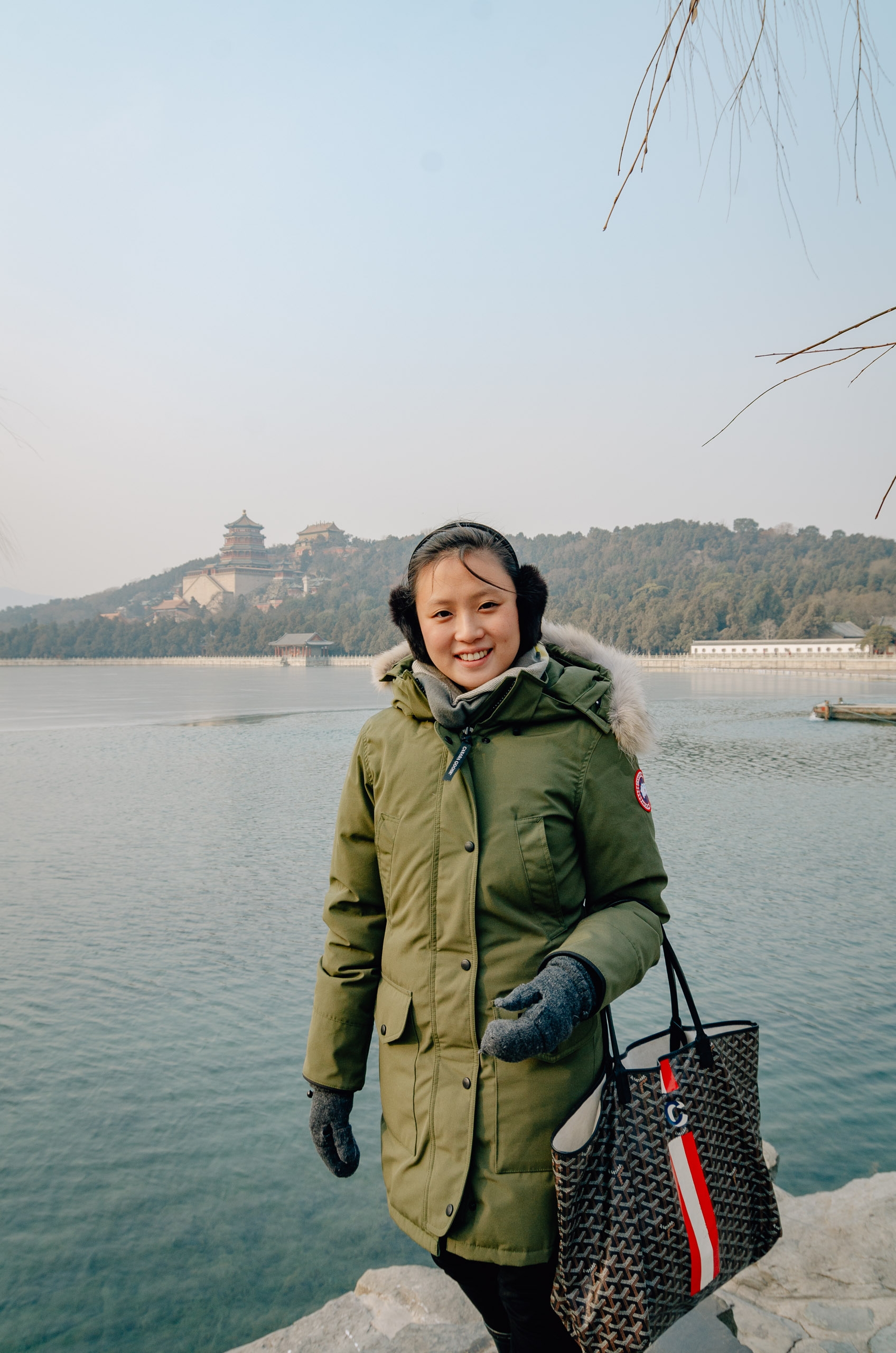 Jessica in front of the lake (click to enlarge)

Just past the lake you enter the inner grounds of the Palace. The gardens here are decorated with enormous boulders, that were gifts to the Emperor. Its said the donor went bankrupt expending all his resources to move these giant rocks to the palace. As a result, its ok to photograph the rock, but you aren't supposed to be photographed with the rock or you too will suffer the same fate. Note the photo below, absent of anyone.

"Thanks for the giant rock, you shouldn't have. No I'm serious, you really should not have done this." 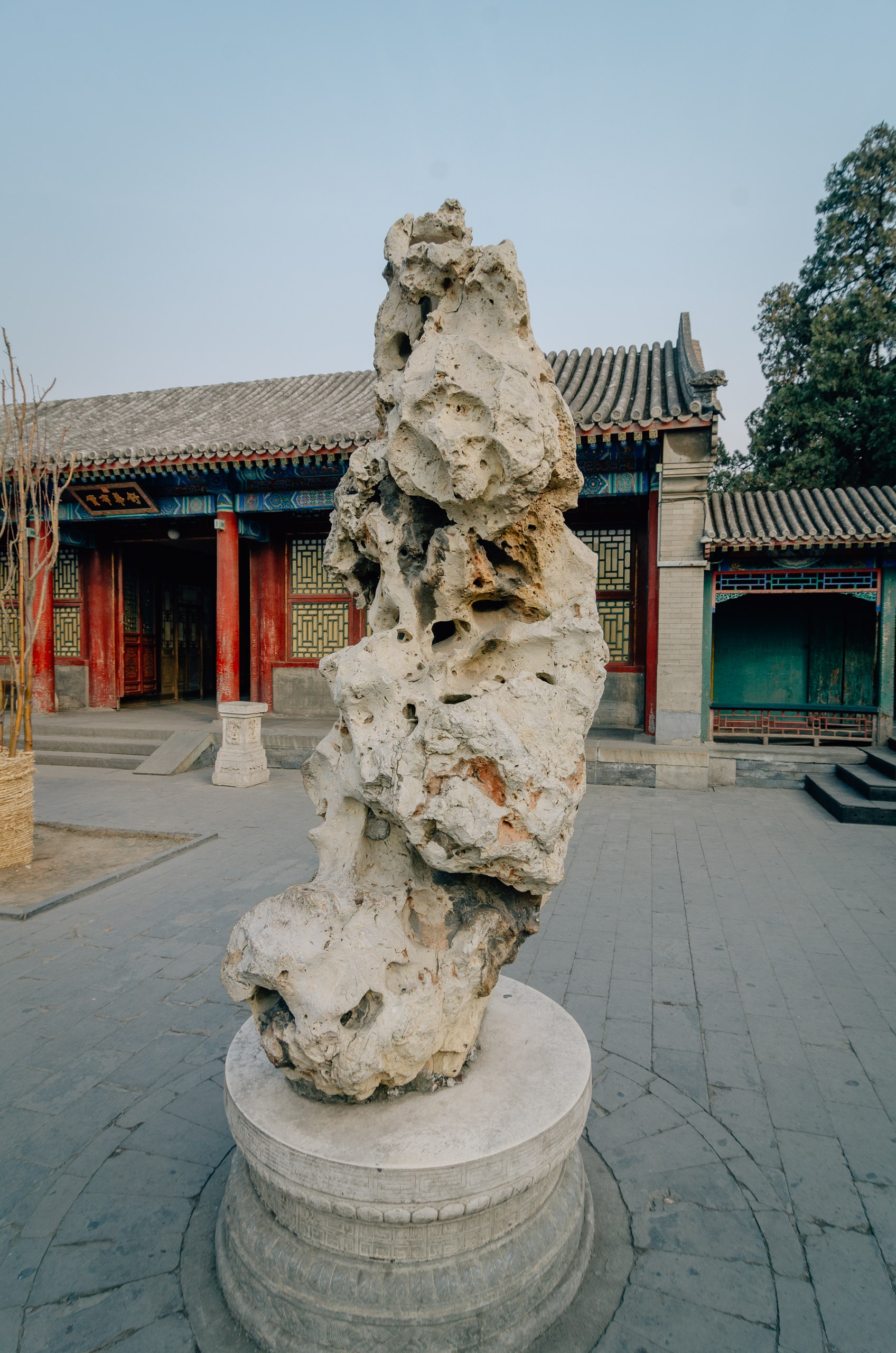 Past the boulders is a very long corridor named...The Long Corridor. The Corridor is over 2,100 feet in length and is adorned with over 14,000 paintings depicting all aspects of Imperial life. The detail, and the vast scope of the detail, is simply amazing. The photo below gives you a sense of the scale of this building. The lake is on the left, and on this day the breeze blowing off this lake brought the windchill down to about zero degrees. 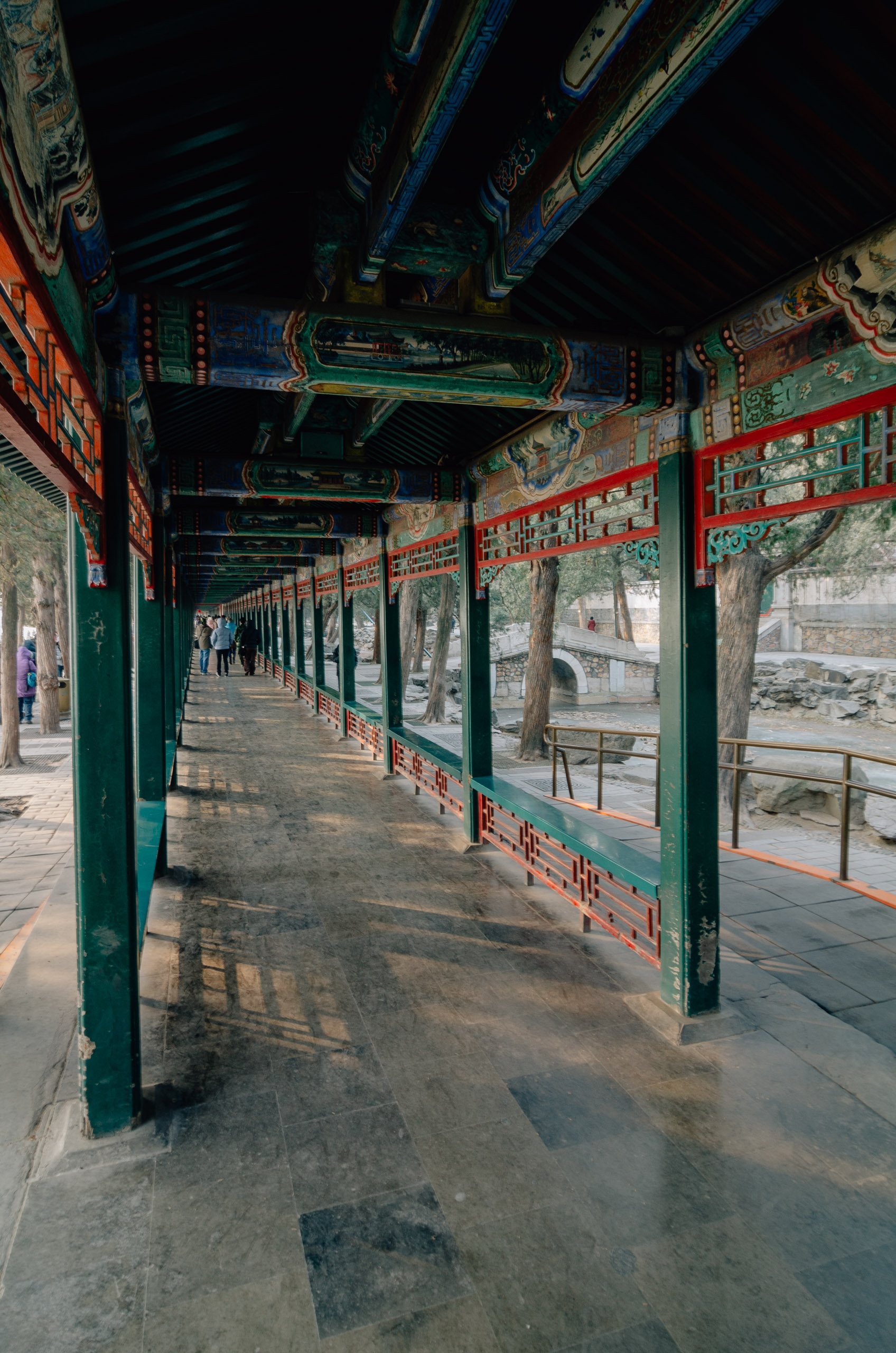 I got to the end of the Long Corridor, but was stopped cold (pun intended) by a humorless guard who would not let me advance without a proper ticket. He also wouldn't allow me to take pictures from the gate as that would defeat the need of having a ticket. So, I don't have any pictures of the palace except for those above and from a distance. In retrospect, it was too cold to climb those stairs anyway. Defeated, we turned and headed back toward the bus. 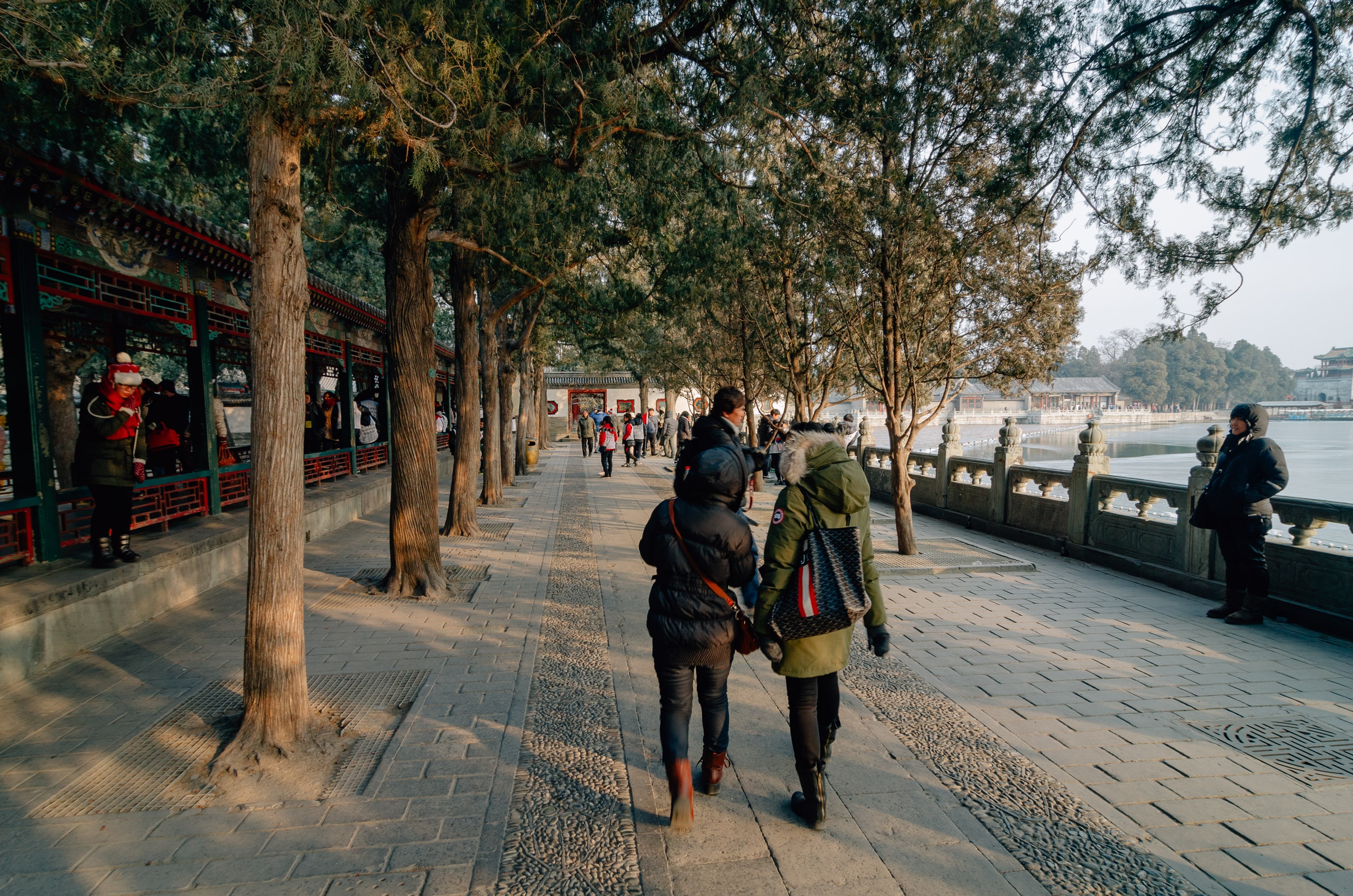 January is definitely not the high season for Beijing tourism, and for good reason. The next day it snowed, which makes for unique experience in some of the more popular spots like the Great Wall and Forbidden City. Because the wedding was that afternoon, we opted not to venture out for fear of getting tangled up in a foul weather crawl of traffic. I took this photo below as we were leaving, and the wind chill had dropped just below zero. The day after the wedding we left for Harbin, where the temperature hovered around -15 degrees. More on that in the next post. 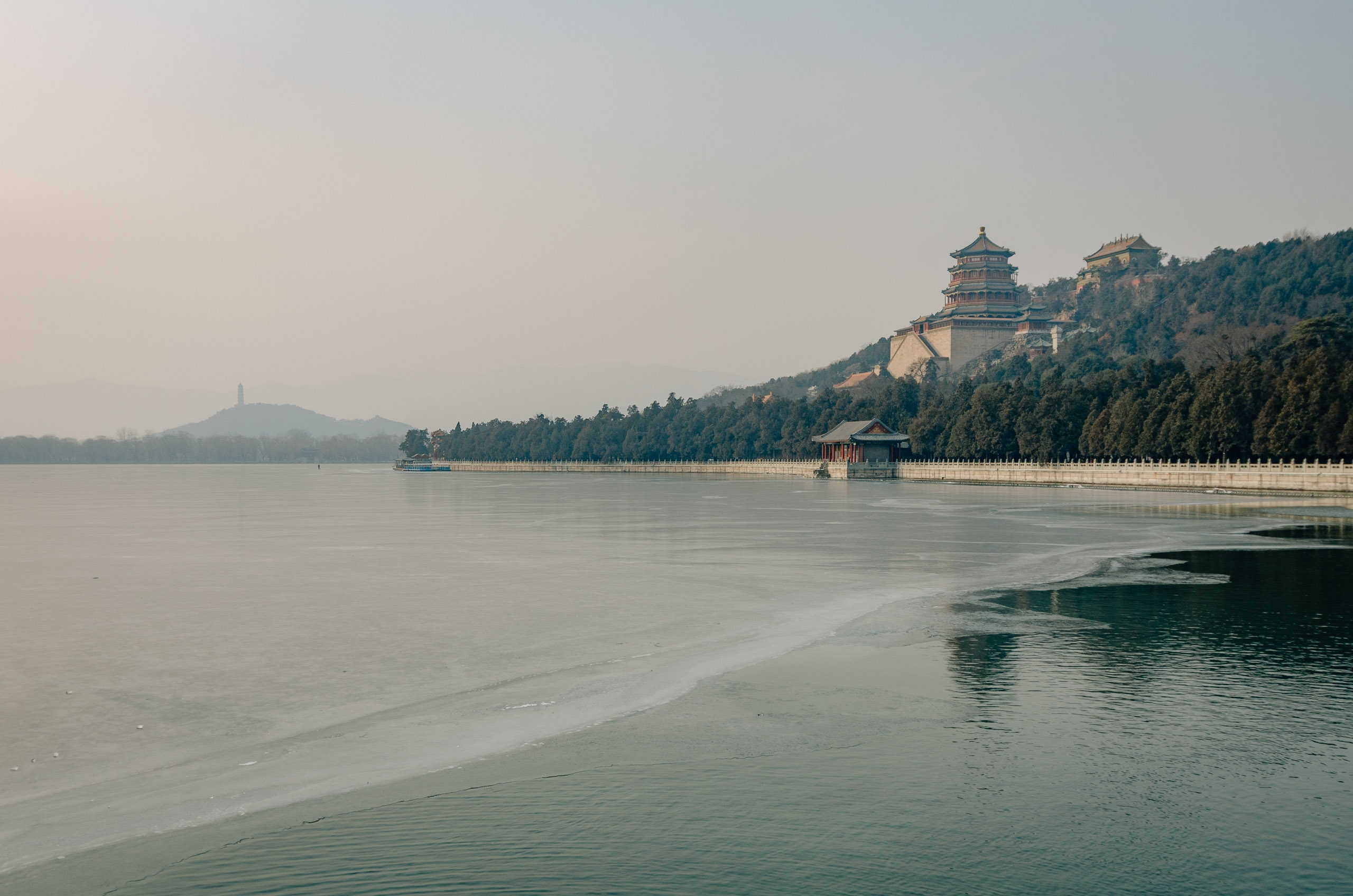 The frozen lake beside the palace. It was quite windy and brutally cold (click to enlarge)