dark mode
Visit to Parrot Cay in the Turks & Caicos
October 18, 2011
Last week, and somewhat on a whim, we took a trip down to the Turks & Caicos Islands for five days at Parrot Cay, a spa resort on the isle of Parrot Cay, about a 40 minute boat ride from Providenciales. This is my third trip to the Caribbean, having visited the (US) Virgin Islands for John and Carey's wedding, and the Cayman Islands for the Koeller Family reunion years ago. Jessica has been to the Bahamas and Puerto Rico, but this was our first trip to the Caribbean together. Visiting the Caribbean this time of year is easy as there are lots of good deals before the high season starting just ahead of the Thanksgiving holiday. Heavy rains and hurricanes might upend your trip in October, but its likely not to be as brutally hot as it can be right up until the end of September.

Despite the last minute nature of this trip, we did a lot of research before picking this destination. We wanted to avoid the touristy "port of call" cruise ship destinations, but didn't want to spend a the fortune necessary to visit a place like St. Barth's or St. Maarten. We sorted our list by non-stop, inexpensive air destinations and Turks & Caicos quickly rose to the top. Flights on jetBlue were about 3 hours in length and about $240 round trip. I had read many good things about Turks & Caicos, known for its beautiful beaches, terrific diving and its status as an international tax haven, so we booked our flights. The Parrot Cay resort was running a "summer special" so we decided to book that as well, and headed down for five days of sand, sun and surf.

The Turks & Caicos is a group of islands that is geographically contiguous to the Bahamas, but politically is a distinct overseas British territory. A species of cactus exists on the island that has a red top resembling a fez hat; resulting in the name, "Turk Cap". Originally, the islands were named after this cactus and known as the Turk Cap Islands, but later appended with the word "caicos", which is a mashup of the Lucayan phrase "caya hico", which means, "chain of islands". The islands' local sovereign government was completely liquidated in a corruption scandal in 2009, and today is under the direct control of a Governor appointed by the British Crown. The UK is in talks with Canada to transfer the island to their control, and would likely become part of the province of Nova Scotia. Having traveled extensively across Canada, I can certainly see the appeal of the islands' weather, but otherwise I'm not sure this makes much sense. The islands use the US dollar as their official currency, which is currently trading cheaper than the Canadian dollar so my recommendation would be to visit soon before the exchange rate makes it 5 cents on the dollar even more expensive. 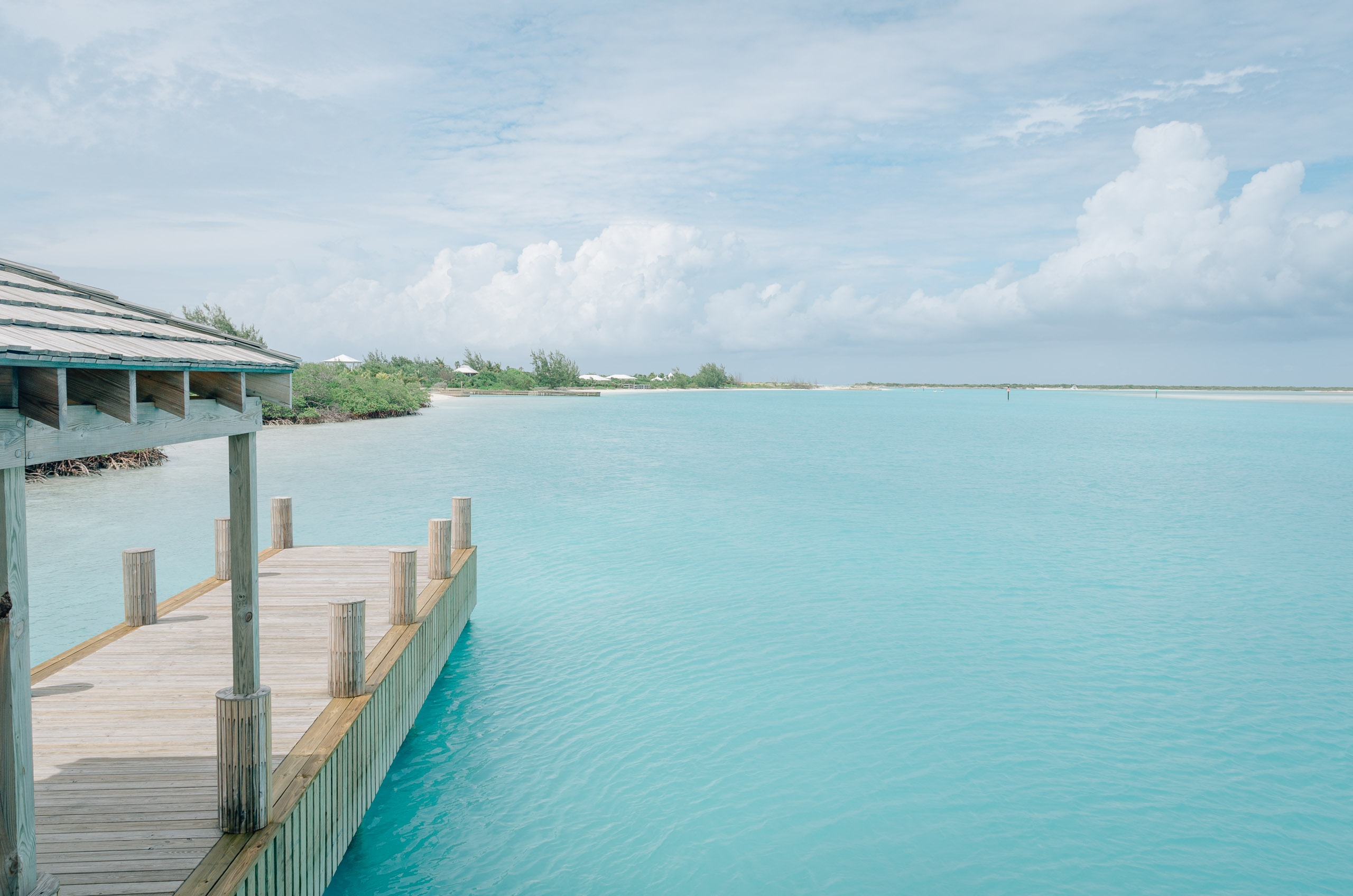 The boat dock in Providenciales

After an easy three hour flight, we arrived at the main airport in Providenciales. After clearing customs and immigration (no visas necessary for US Citizens), we were met by a driver who took us to the boat dock owned by our hotel. From the dock, the ride is about 40 minutes by boat to the private island of Parrot Cay. The island of Parrot Cay is home to the Parrot Cay resort, and a handful of expensive luxury homes owned by the likes of Bruce Willis, Christie Brinkley, Keith Richards and Donna Karan. We didn't see any of these famous folk during our stay, but I doubt they mingle with lowly resort dwellers such as ourselves.

The island was originally inhabited by two female pirates who lived in what today is called the Pirate House (part of the resort, it can be rented for your next stay). The island was originally called Pirate Cay, but was changed to the more visitor-friendly Parrot Cay years later. Personally, I would love to go to Pirate Island but I guess I long missed my chance. 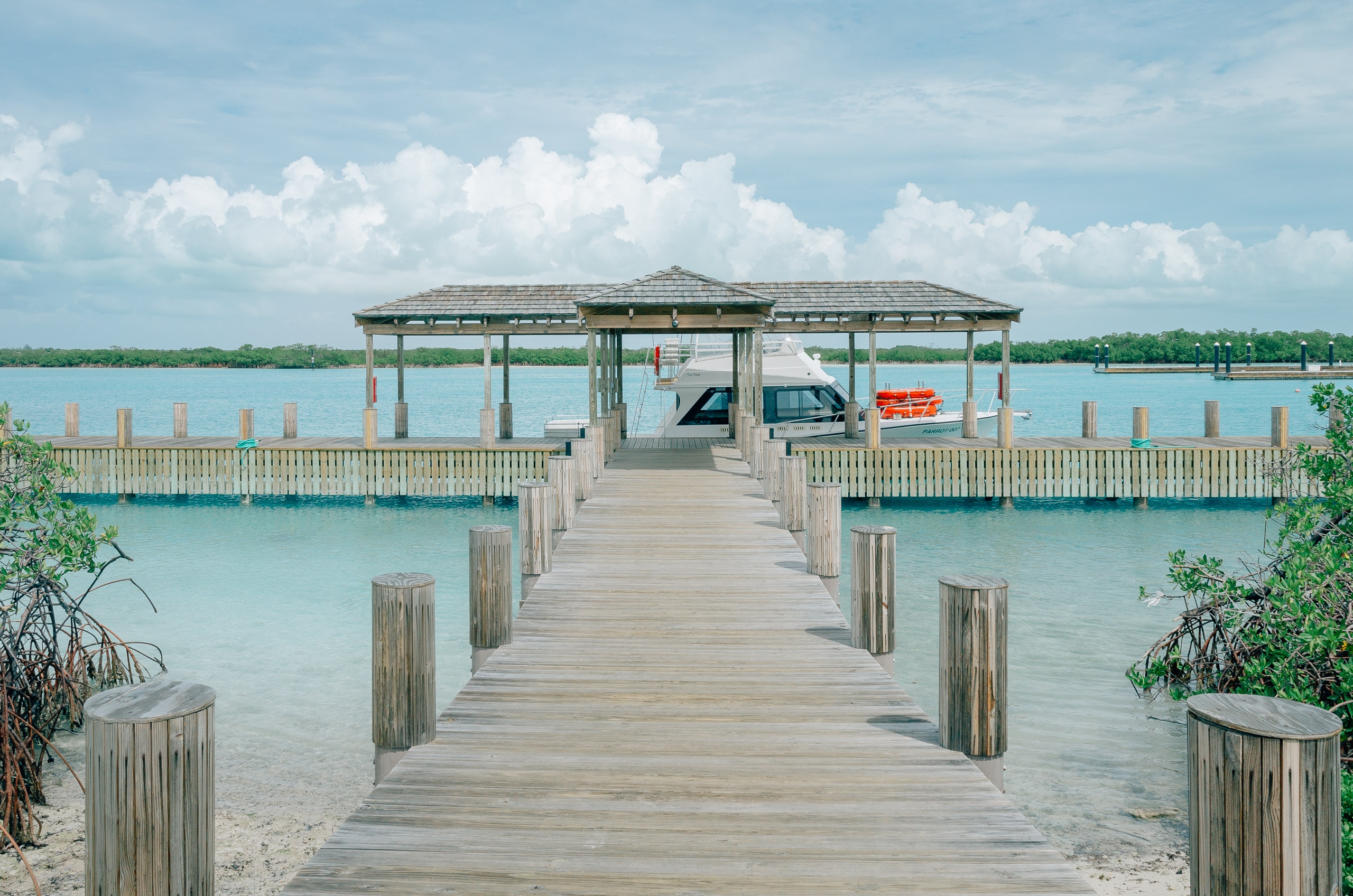 Waiting for the boat

The very first thing you'll notice while landing is the brilliant blue water. The water is amazingly clear and warm, and the sands are brilliantly white and as soft as flour. The shallow reefs and white sand bars make for brilliant turquoise seas, especially when the sun is shining. The weather was partly cloudy the day we arrived, but would be overcast and rainy for the next two days. It never rained or stormed enough to keep us from doing what we wanted to do, but it wasn't always as picturesque as these photos might lead you to believe. 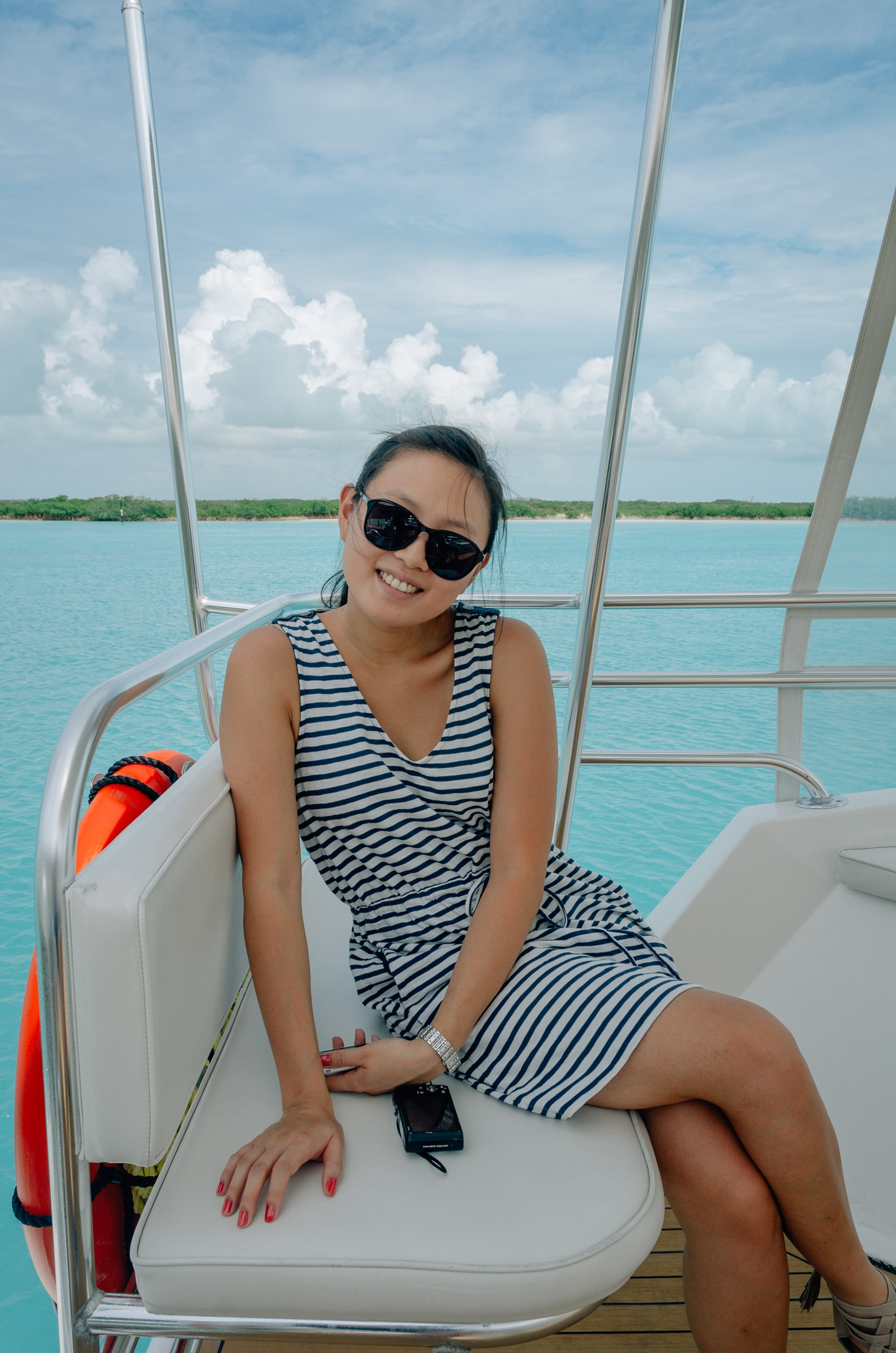 On the boat to Parrot Cay

The boat ride was quick and comfortable, and under the helm of Captain Neil Diamond. I wasn't sure if I was supposed to laugh, but since he never smiled I assumed that was his real name. We were the only ones arriving that day so it was just the two of us on the journey to Parrot Cay. Once you arrive, you should plan on staying on the island for the duration of your stay for two reasons. One, there's not much to see elsewhere except a few notable restaurants and casino, and two, if you want to charter the boat outside your airport transfer, its about $500 to do so. Needless to say, we stayed on the island. 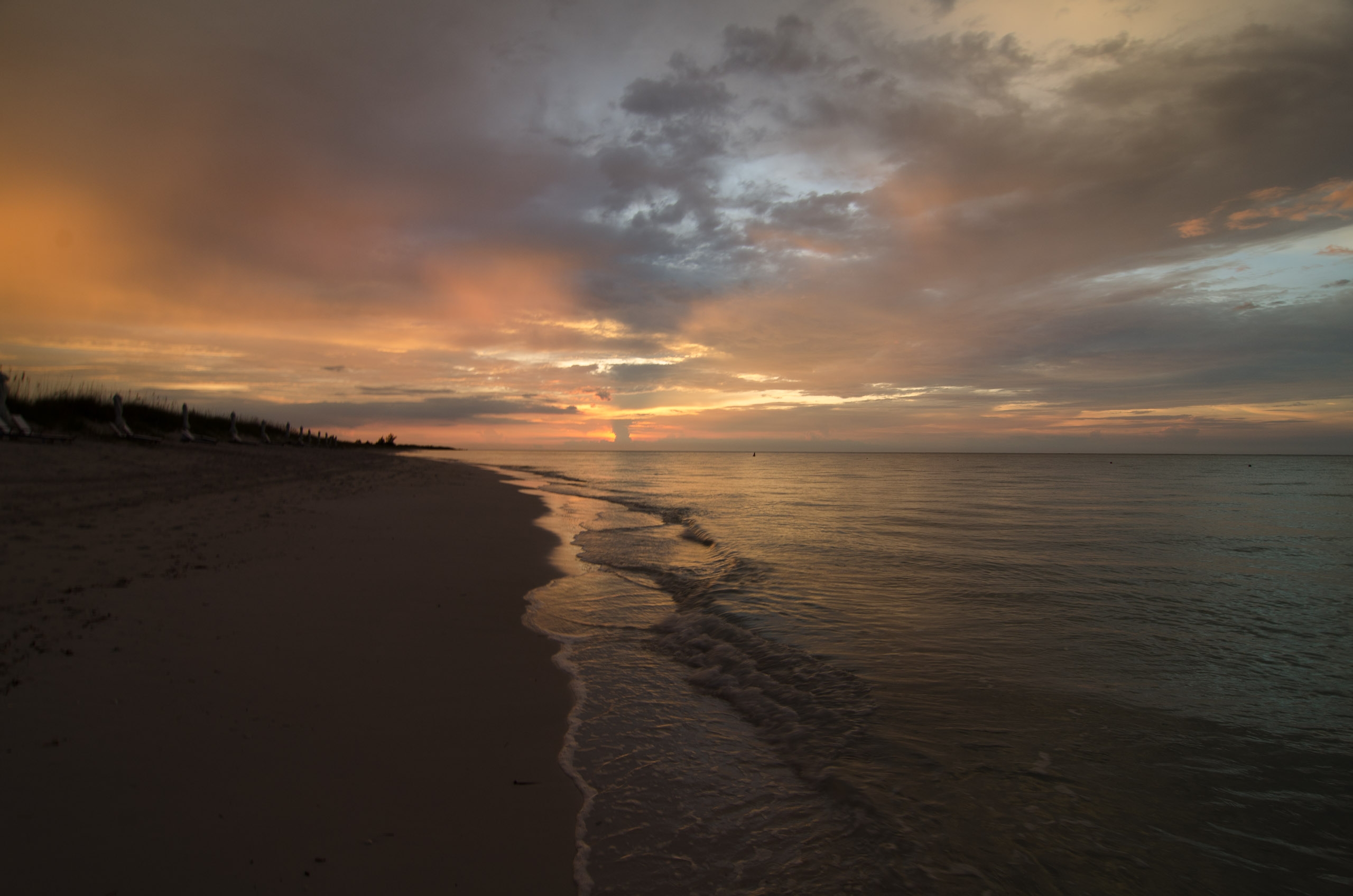 We have a tradition in our family where we send a sunset photo taken on the first night of a trip to flaunt our vacation to family back home. The first night it was dark and rainy, so I waited until the second night to take this photo as the skies began to clear. Despite the weather, we kept up our activity plan going snorkeling along the world's third-largest coral reef, taking the kayak out for a spin into an advancing thunderstorm, and of course our daily yoga class at the spa pavilion. Kayaking toward a thunderstorm

Thursday was our last full day on the island and the sun was out the entire day. We got an early start of a huge island breakfast followed by an Indonesian massage, then headed to the beach for lounging, paddle-boarding, sailing and more lounging. As it was the off season, the beach was still pretty empty. We setup shop about a hundred yards from the beach hut. 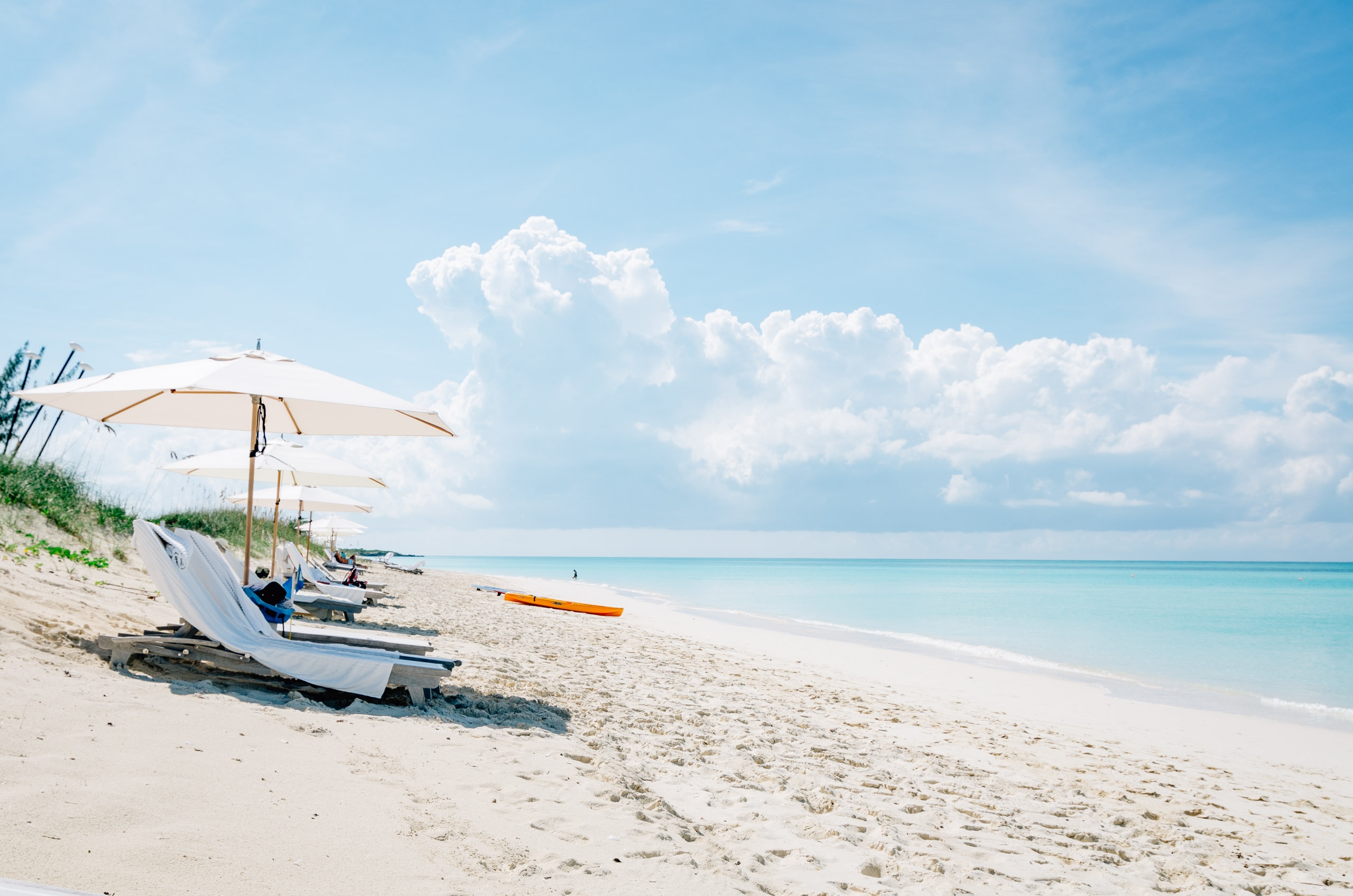 The beach at Parrot Cay

Depending on how much sun you wanted to get or avoid, it was easiest to just change chairs. The umbrella was embedded in a cement block that probably weighed 500 pounds. If you wanted anything from the restaurant or bar, just put out the little blue flag and the beach butler would be along in a few minutes. 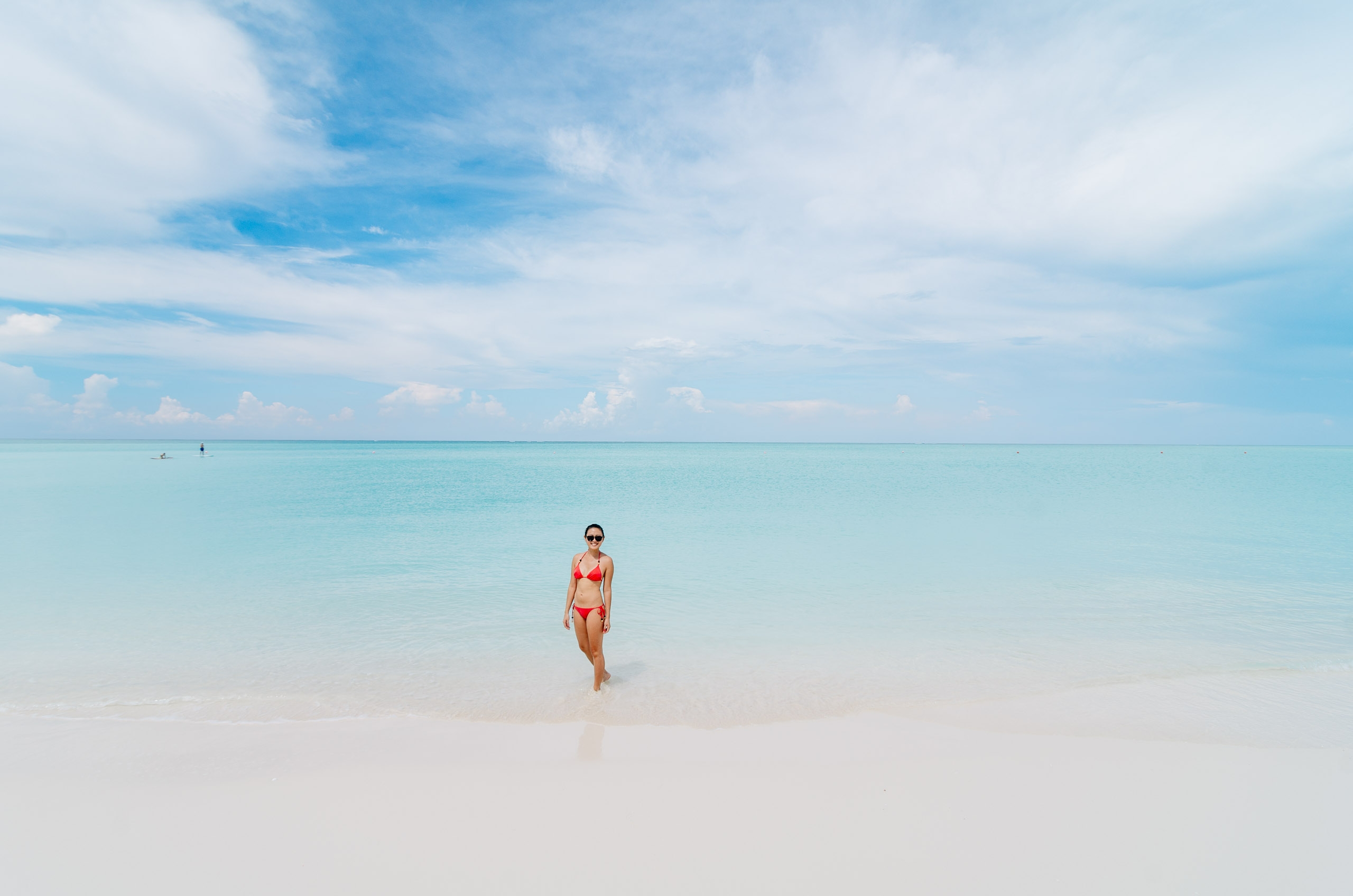 When we visited Hawaii in April, John and Carey took us out paddle boarding for the first time. A paddle-board is an oversized surf board and you use a long oar to navigate around the coastal waters. Jessica took to it immediately, while I just fell off repeatedly. This time around, however, something clicked and it suddenly made perfect since and I was able to paddle board with ease and found it to be quite enjoyable. I can't guarantee I'll have such continued luck, but I did spend more time on top of the board than in the water. 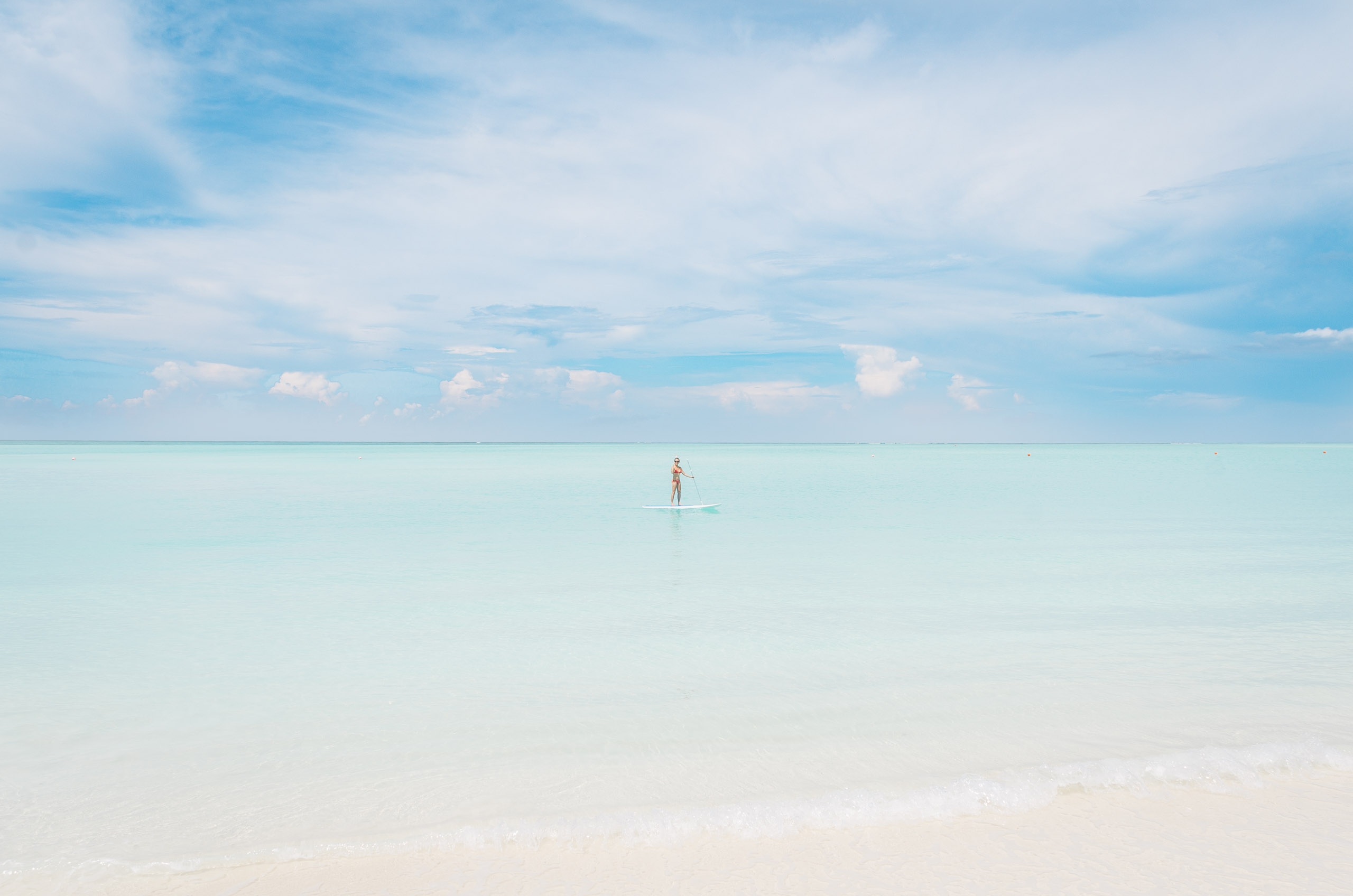 Jessica on the paddle board, making it look easy.

Later that day we took out the sailboat, a twin-hulled catamaran. I did a lot of sailing as a kid, but its been many, many years since I was in command of a boat. After three minutes of instruction ("Steer with this, pull this to go faster, good luck!"), we set out to sea. As we set out, I lectured Jessica about the perils of the boat or the wind changing direction, and to be careful about the sail boom swinging over the deck. As I was giving my advice, exactly that happened. The bottom of the sail hit me in the back of my head, bending my sunglasses and knocking my hat into the water. If you ever go sailing with me, don't listen to my advice but do keep your eyes open. Despite that mishap, we had a good time going up and down the coast, learning how to tack and navigate with and against the wind. The staff watched us from the shore, and was prepared to the deploy the speedboat (pictured below) in the event that a water rescue was necessary. 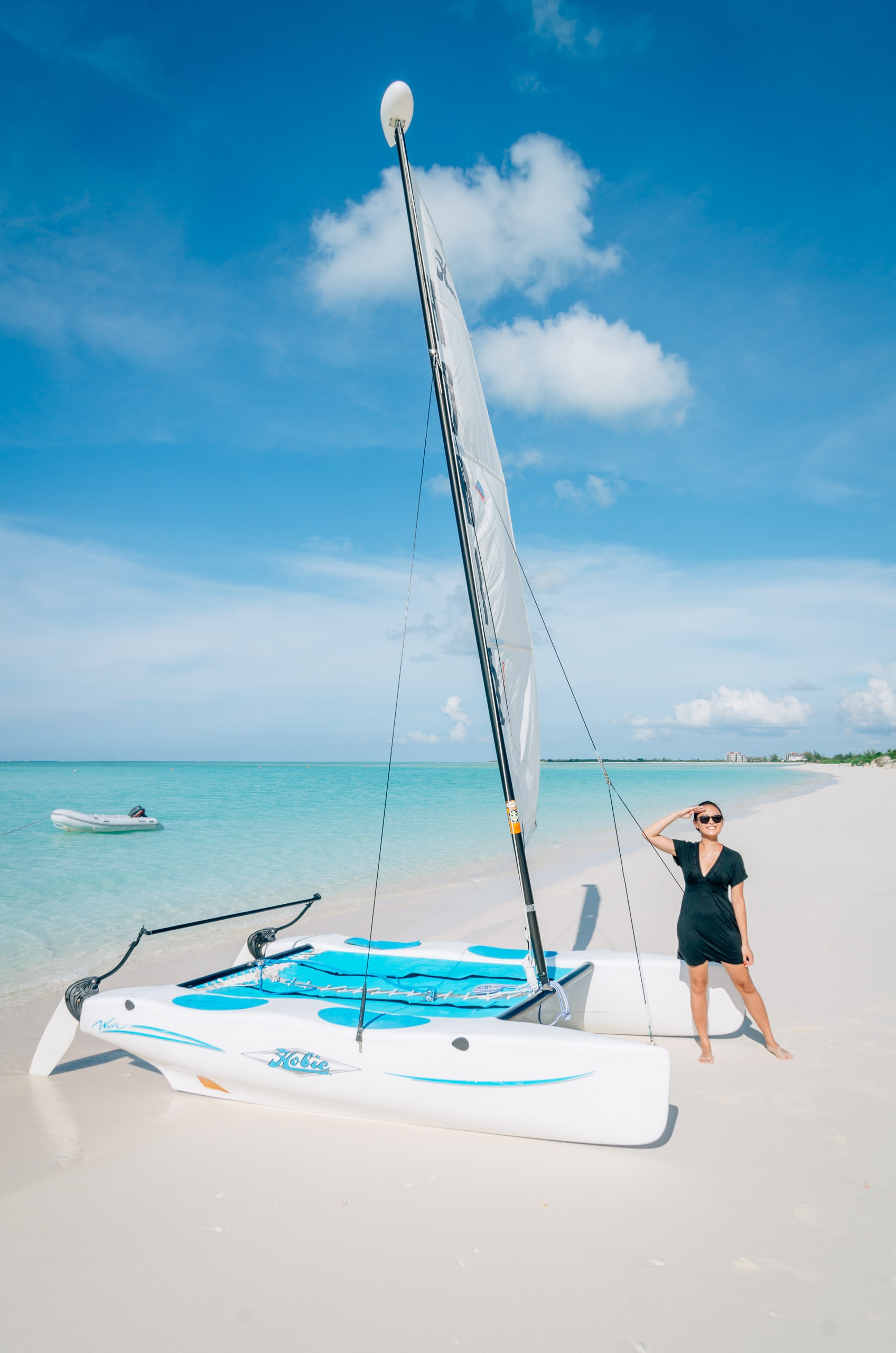 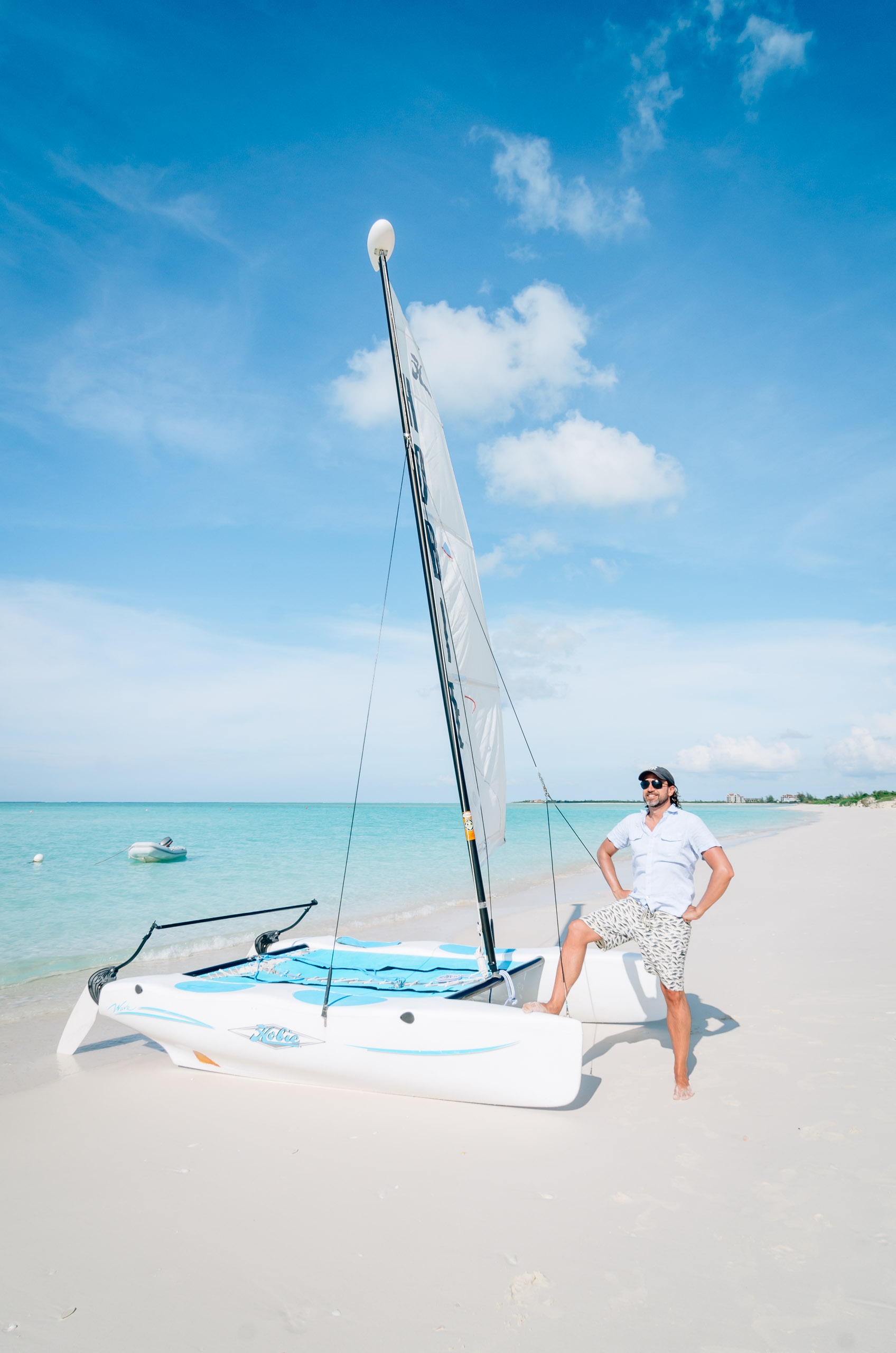 The captain. Note the adventure shirt.

Later that afternoon we moved to the pool for a light lunch and some freshwater lounging. The resort has a 5,500 square foot infinity pool that overlooks the beach, and is a nice break from the sand and salt. 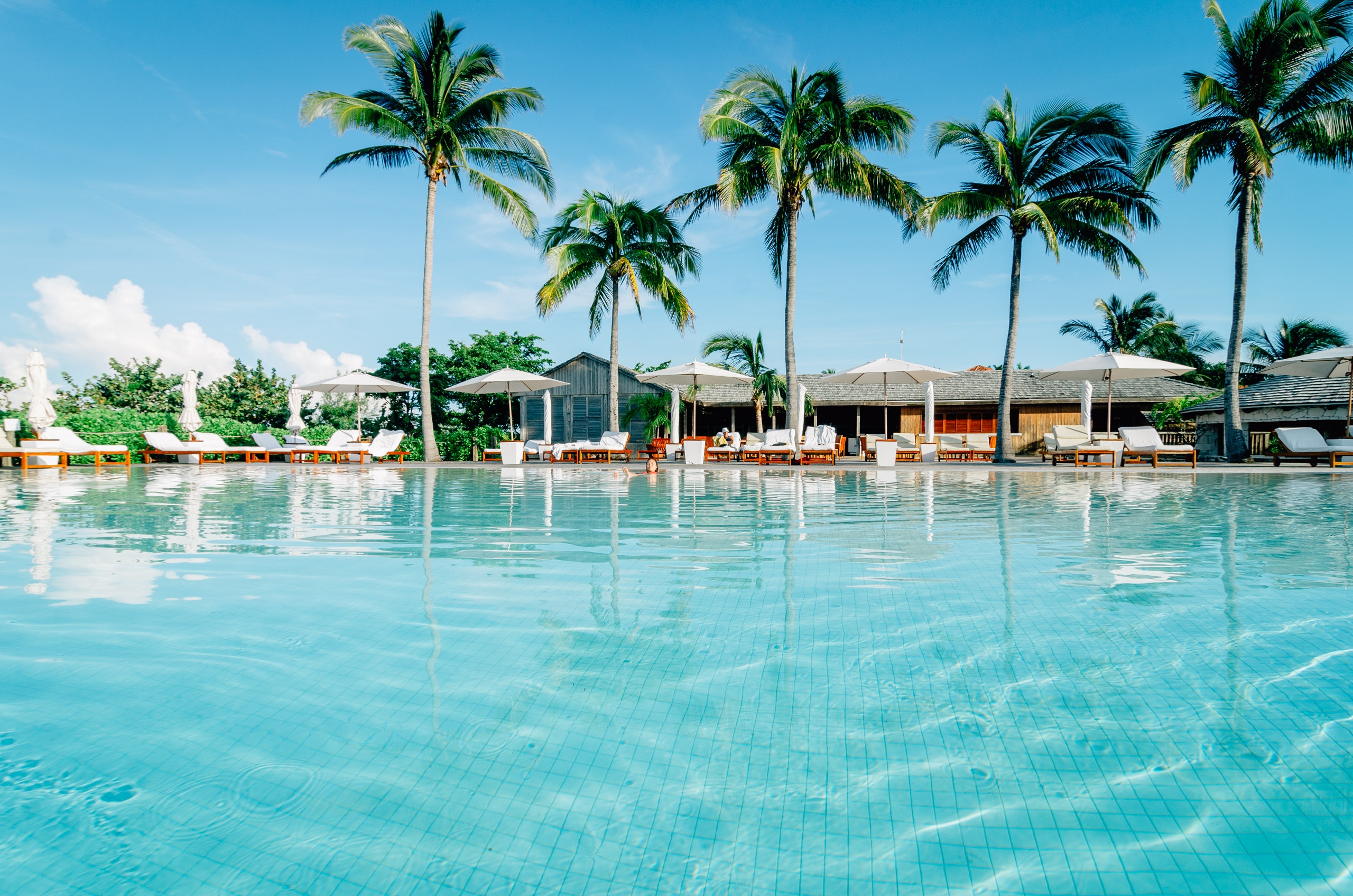 Back at the pool

Walking back to the room around sunset, we decided to eat in that night and enjoy one last night of relaxation. The hotel sits back a bit from the ocean, but its only a 2-3 minute walk down to the water. There are villas for rent that sit directly on the beach and have private pools, but that's a whole different price tier which we won't get into here. 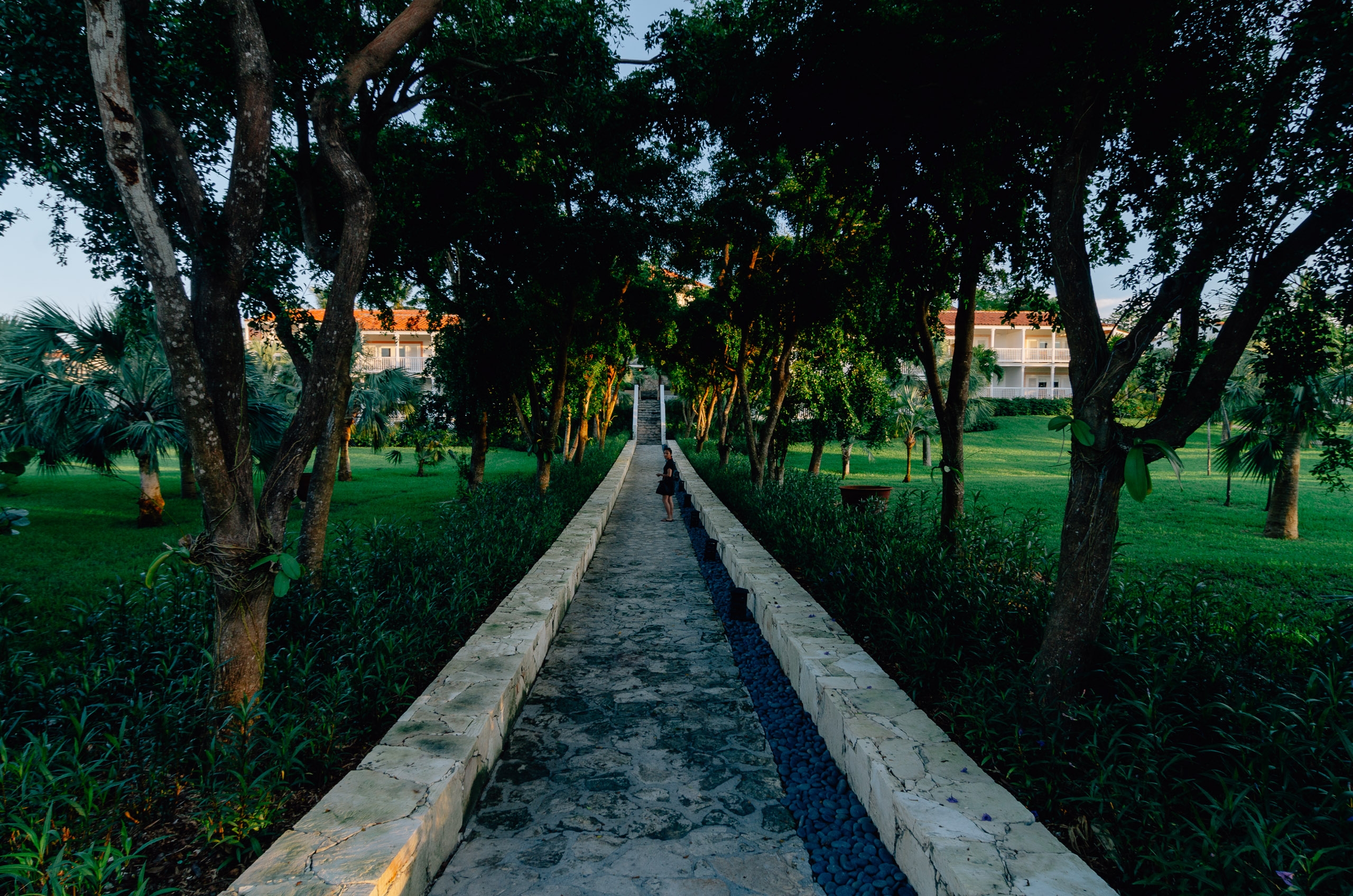 Walking back to the room at sunset 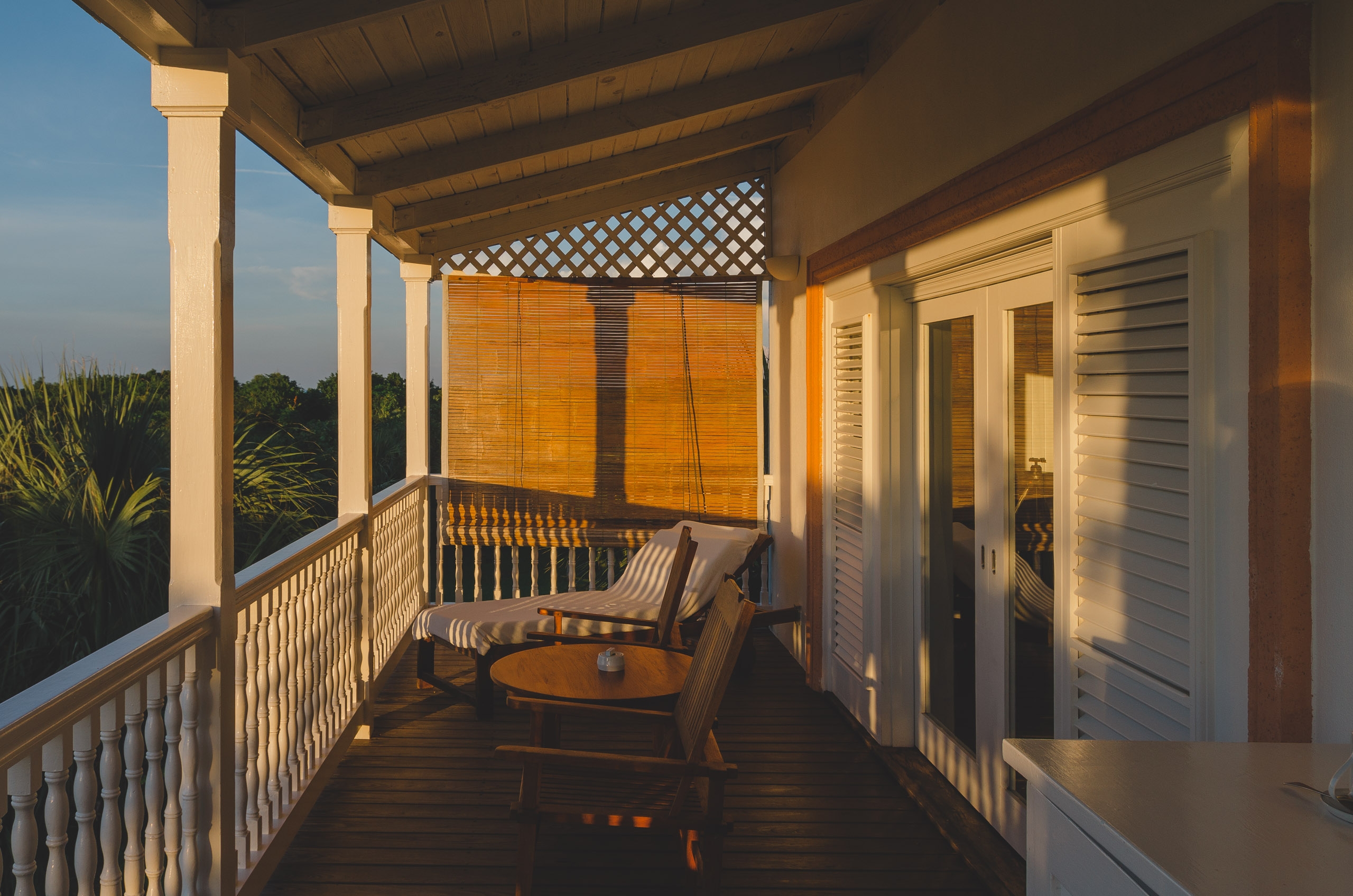 Last night on the lanai

Overall, we had a terrific visit to Turks & Caicos and it was perfectly relaxing. The resort was simply beautiful, and the staff were all warm, welcoming and helpful. We had a few troubles with biting insects, Jessica more than me. Apparently this is common throughout the Caribbean, and it was especially bothersome around dusk or when it was raining. It was a nuisance, but didn't ruin the trip nor would it prevent us from coming back. We brought the DEET big guns, but even so we had a few bites upon return.

I also made two rookie mistakes on this trip. I forgot to tell American Express I was traveling so of course during checkout my card was declined. That's always an awkward conversation, but after a few minutes on the phone and about two dozen questions to verify my identity, the situation was quickly resolved. Second, we picked our flight times based on what was cheap and convenient during the time we had allotted for this trip, and we didn't consider the scene arriving at JFK's international terminal on a Friday night at 5:30. The lines for customs and immigration were immense and intense, which was quite a shock after five days of loafing around the island. As easy as the trip was, immigration is always a bit of a hassle and I can see the appeal of Miami or Puerto Rico so as to avoid the process altogether. However, an hour later we had mostly forgotten about that minor inconvenience and were resolved to return.

I give Turks & Caicos and our resort Parrot Cay very high marks for comfort and relaxation. The resort isn't cheap, but you can find deals and its the kind of place where they don't nickel and dime you for every little thing you want to do. You basically pay for your room, drinks and dinner, and everything else I described is included. By the way, the food is terrific and even I ate seafood AT EVERY MEAL DURING THE WEEK (those that know me will get the emphasis). The spa is world renowned, and may visitors come just for that. We took in a massage, but mostly enjoyed the yoga and Pilates classes daily, both in the spa pavilion and on the beach at sunrise (well, 8AM but that's pretty early when you're on vacation). If you're looking for a party or some nightlife, look elsewhere. But if you want to show up, lie down and have your fruity umbrella cocktails brought to you pool/beachside, this is the perfect place.