dark mode
Memorial Day Weekend in Philadelphia
June 03, 2011
We spent the long Memorial Day weekend in Philadelphia, Pennsylvania as part of our emerging "Great Cities of the US" tour of 2011, having already visited Chicago, Las Vegas, San Francisco, and Honolulu (I just made that up, we have no such plan). Philadelphia is an easy two-hour drive from New York, so we took the train out to the Chiang House in Congers, picked up the CRV and headed south to Pennsylvania. There was little traffic despite the holiday weekend and we arrived Saturday afternoon around 1:30PM.

I had been to Philadelphia one time before, on a business trip for Arthur Andersen sometime in the late 90s. I had flown out on Monday morning, spent the night, attended what was certainly a pointless 90 minute meeting, then flew back to San Francisco that afternoon. I have a recollection of seeing a few of the historic sights while on that short trip, but I think I may have been mistaken as they all seemed to new to me again. I guess this is what happens when you turn 40. Luckily, by chronicling these travels publicly on the Internet, I can always go back and figure out where I've been. Tod, take note of this.

We came to town for two reasons: firstly, our friend Robbin moved to Philadelphia this past January to take a buyer's position with Urban Outfitters, and she's been dying to show us around. Secondly, as a couple of history nerds, Jessica and I were interested in visiting the sites of historic significance to the formation of the United States. 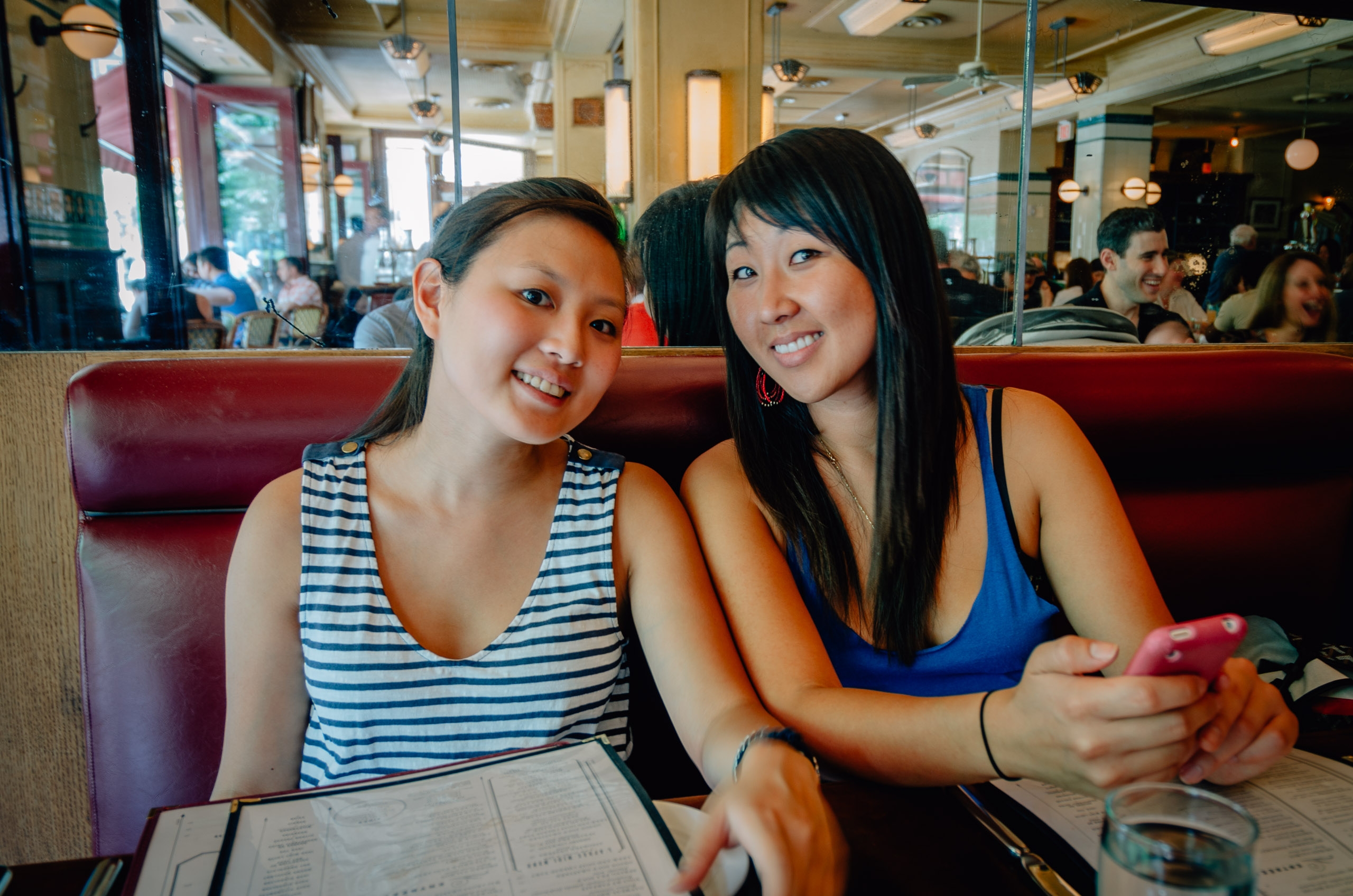 Jessica and Robbin at Parc Brasserie near Rittenhouse Park

Robbin was a terrific hostess and tour guide, shuttling us around all the hip and interesting neighborhoods. All of us being from San Francisco, everything was described in such language: this is the Haight Street of Philadelphia, this is the South Beach of Philadelphia, etc. I don't recall seeing a House of Prime Rib of Philadelphia, so I won't be moving there anytime soon.

I know people both from Philadelphia and those who visit it often, and to be frank it didn't come highly recommended. With my expectations set accordingly, I liked it better than I expected to. The downtown area centered around its historic City Hall is nice with interesting architecture, but had a lot of familiar chain stores. Moving out into the neighborhoods, the vibe is more unique with a much stronger local feel. As it was a warm holiday weekend, the sidewalks were jammed and all of the outdoor bars and restaurants were open for business. 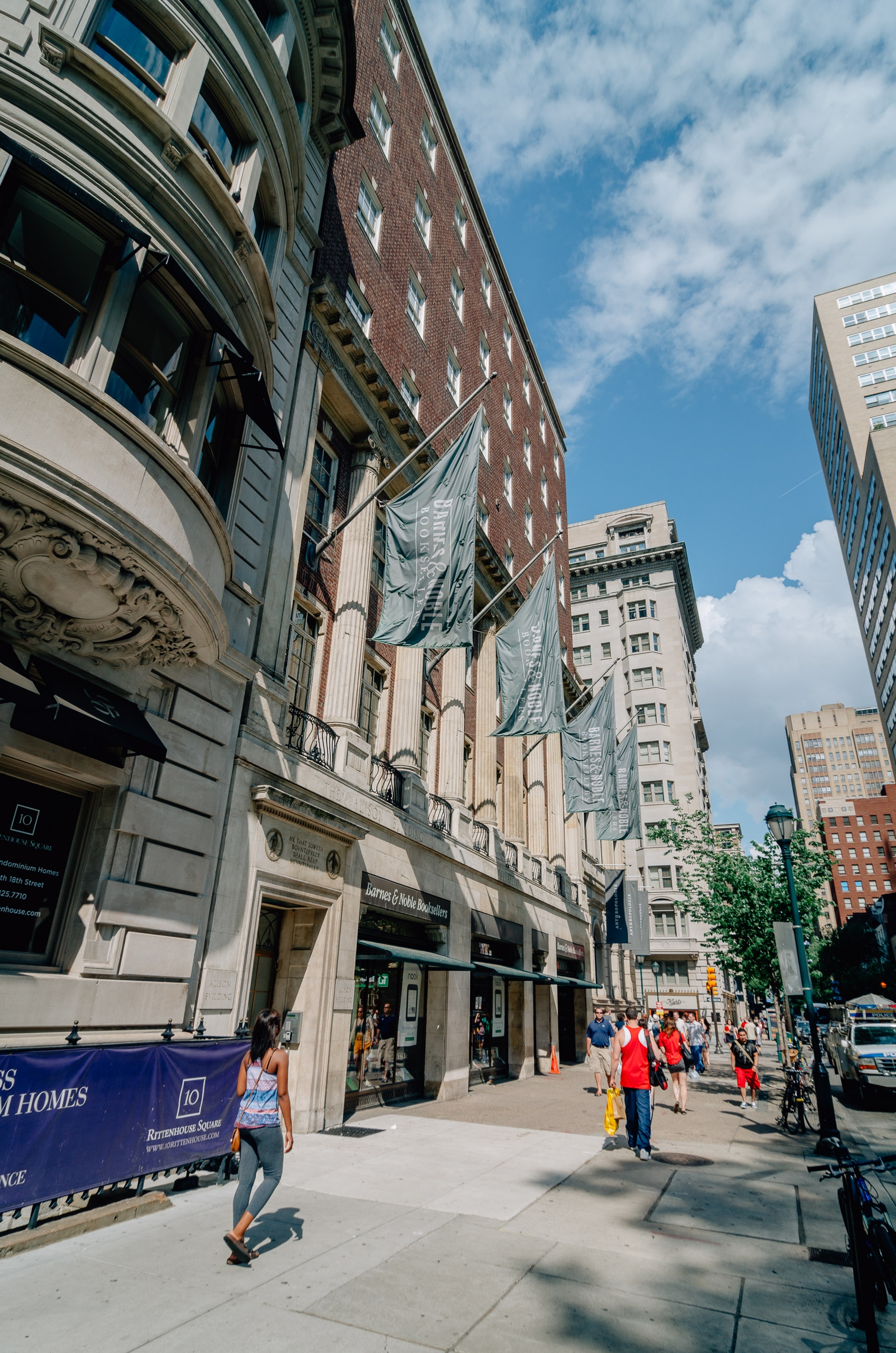 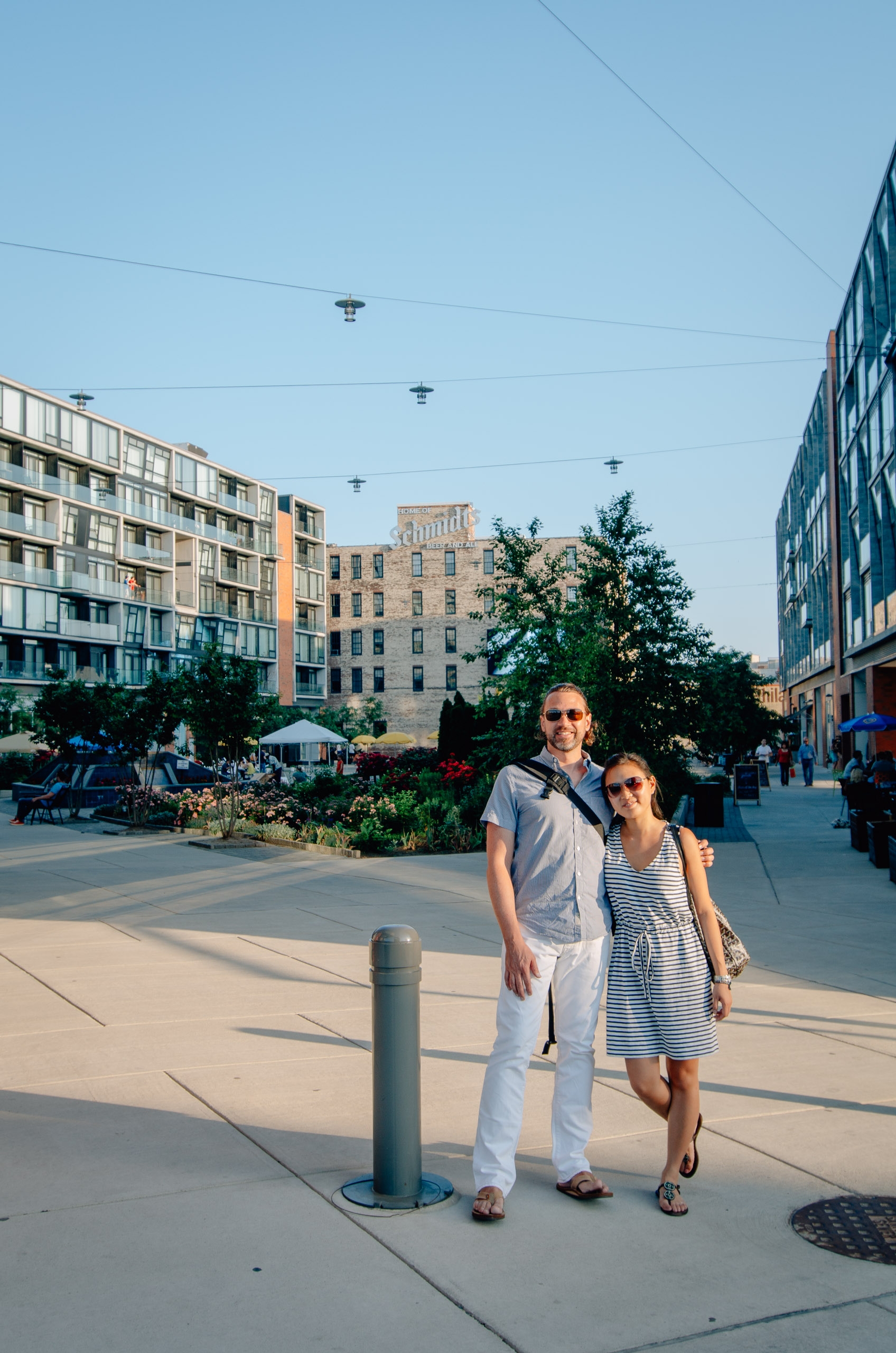 Part of tour included a visit to the offices of Urban Outfitters and Anthropologie, housed inside a series of bohemian, renovated Naval buildings on the waterfront. Although the location is a bit out of the way, the facilities were nice and fitting with the brand's image. It looked like a fun place to work. 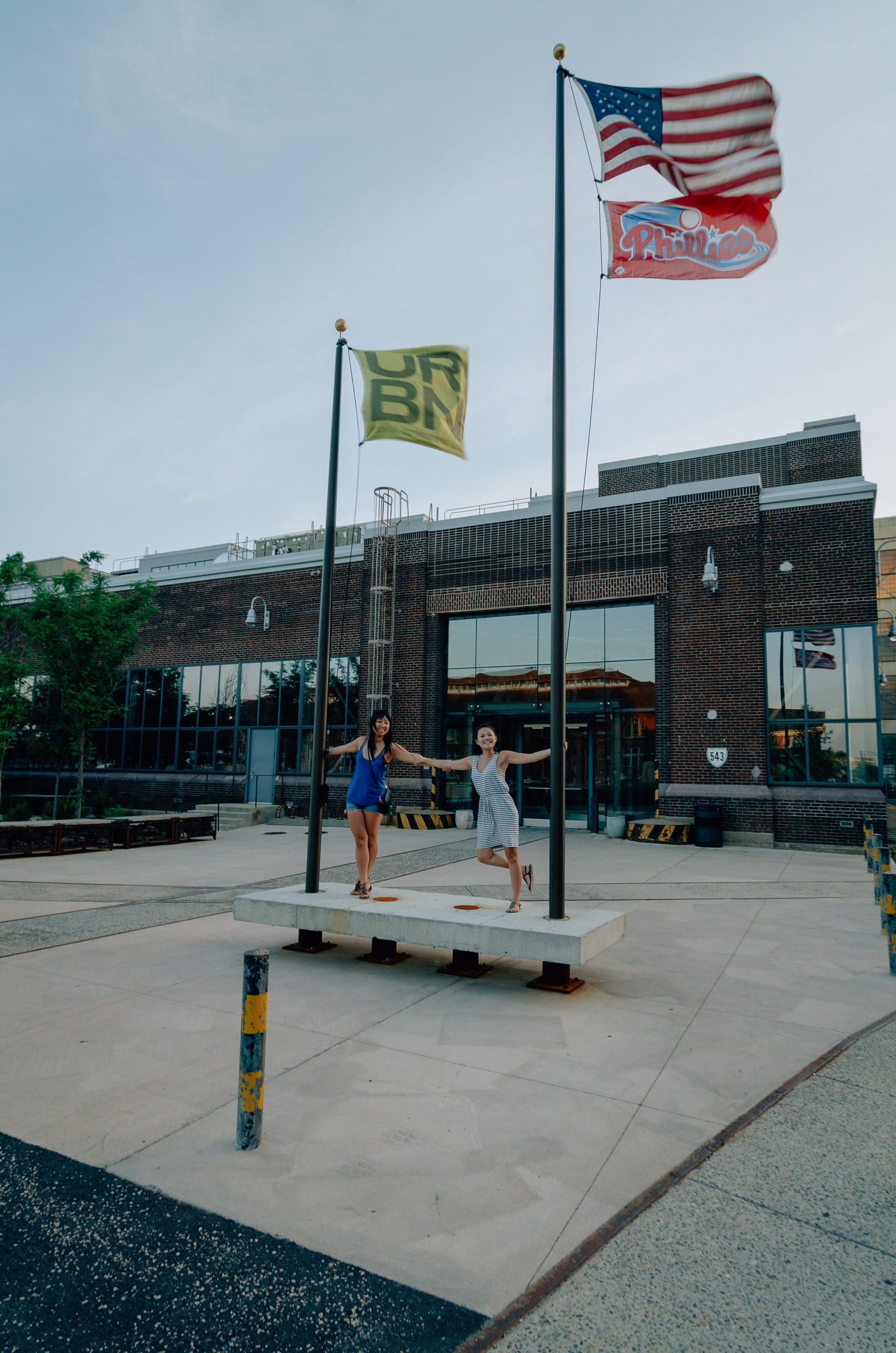 Robbin and Jessica at Urban

We spent Saturday seeing all the neighborhoods in Philadelphia, and later met up for a terrific Italian meal at Mercato. The restaurant is very popular and was very full, so they seated us at large folding table on the sidewalk. Apparently this is ok. Awkward seating but a terrific meal.

Sunday we set aside for sightseeing. Much of the historic sites of Philadelphia are centered around Independence Park, and are a short and easy walk from downtown. The US National Park Service looks after these sites, and admission to much of them is free. You will need to get a ticket to see Independence Hall, however, as they limit the number of visitors and you must be a part of a tour. Tickets for Sunday were gone by the time we got there, so we reserved tickets for Monday and saw what we could in the area. 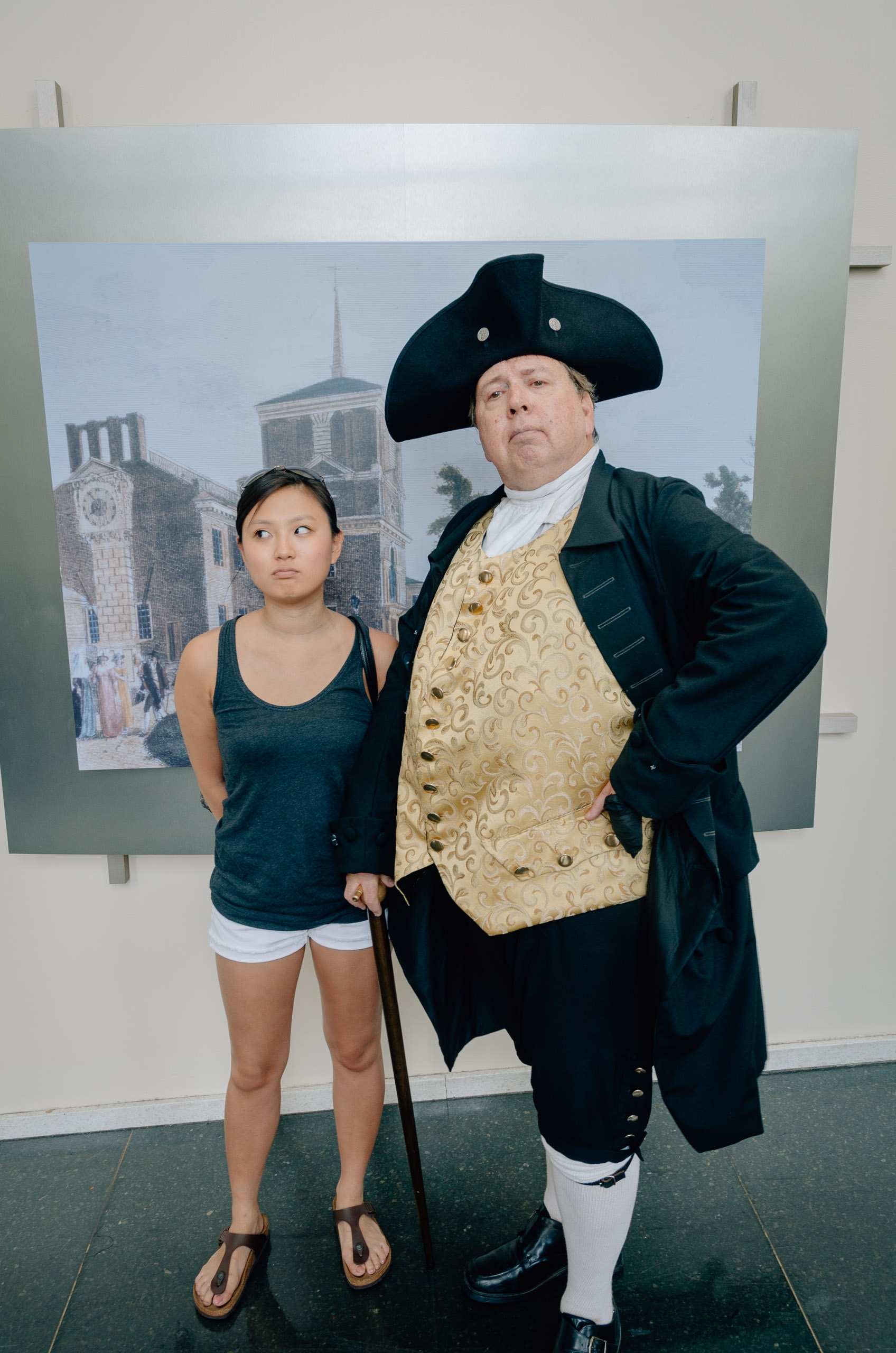 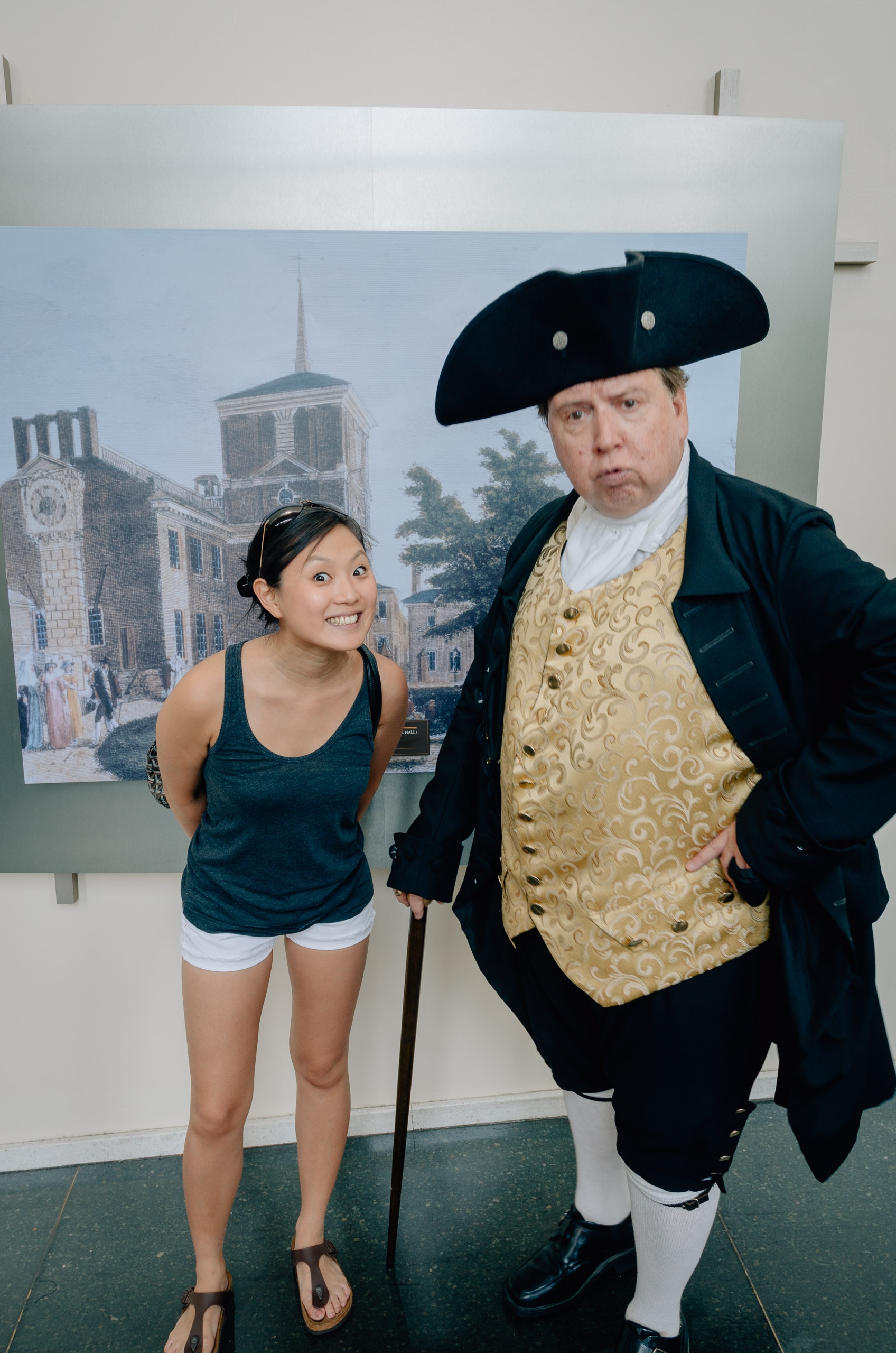 Jessica and one of the locals. In the 16th century, it was considered improper to smile for a portrait. 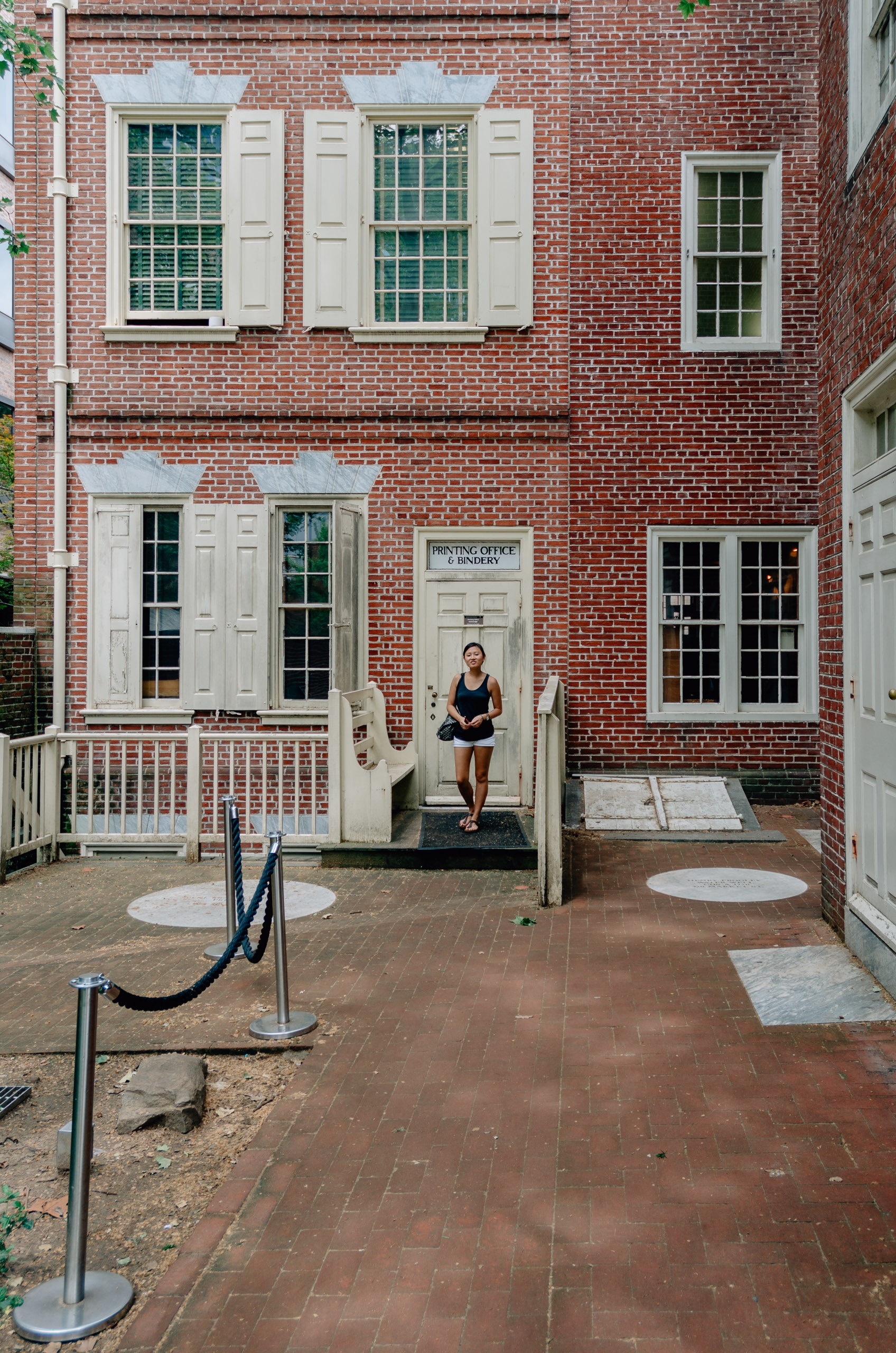 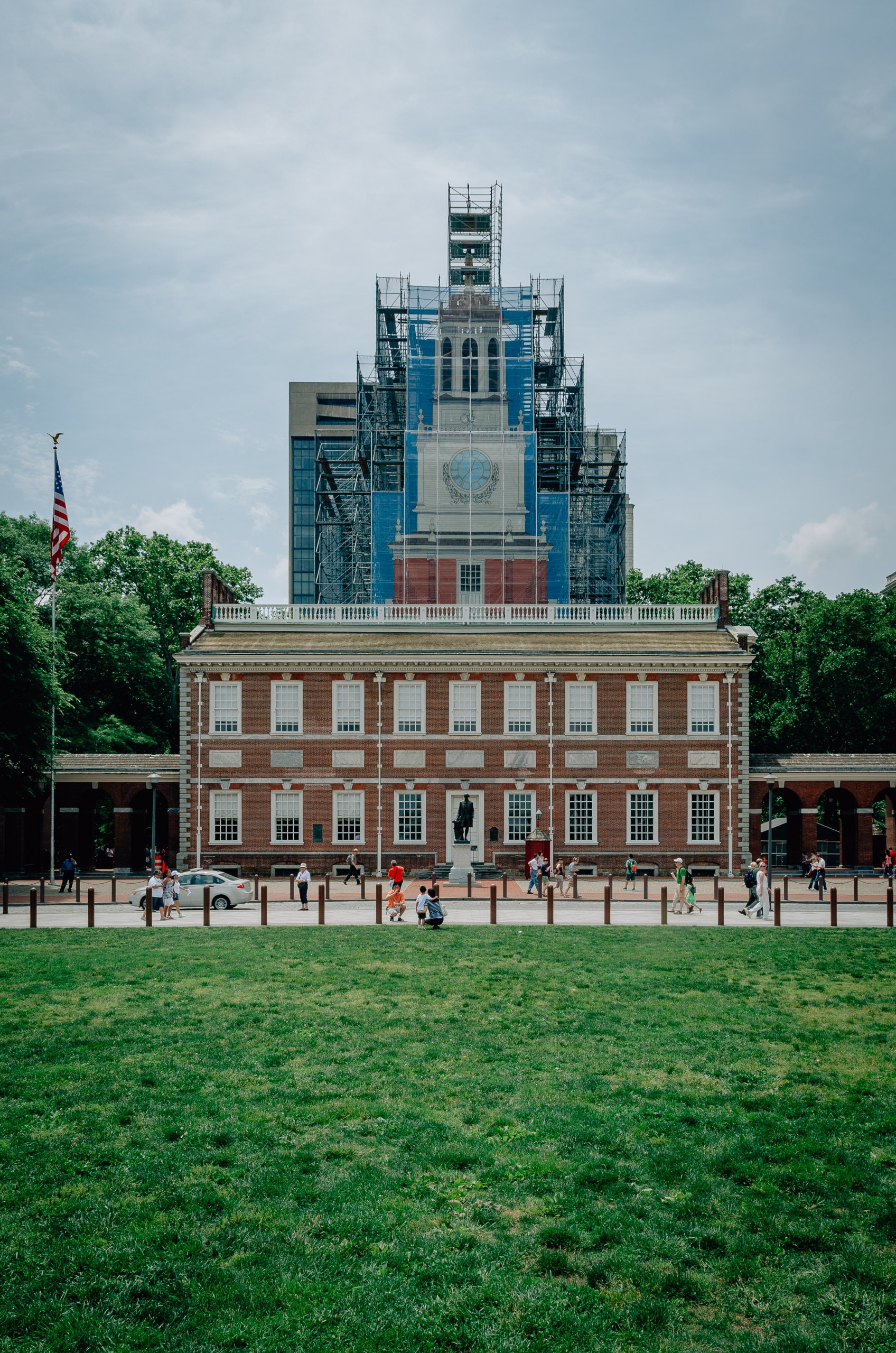 The steeple of Independence Hall under repair 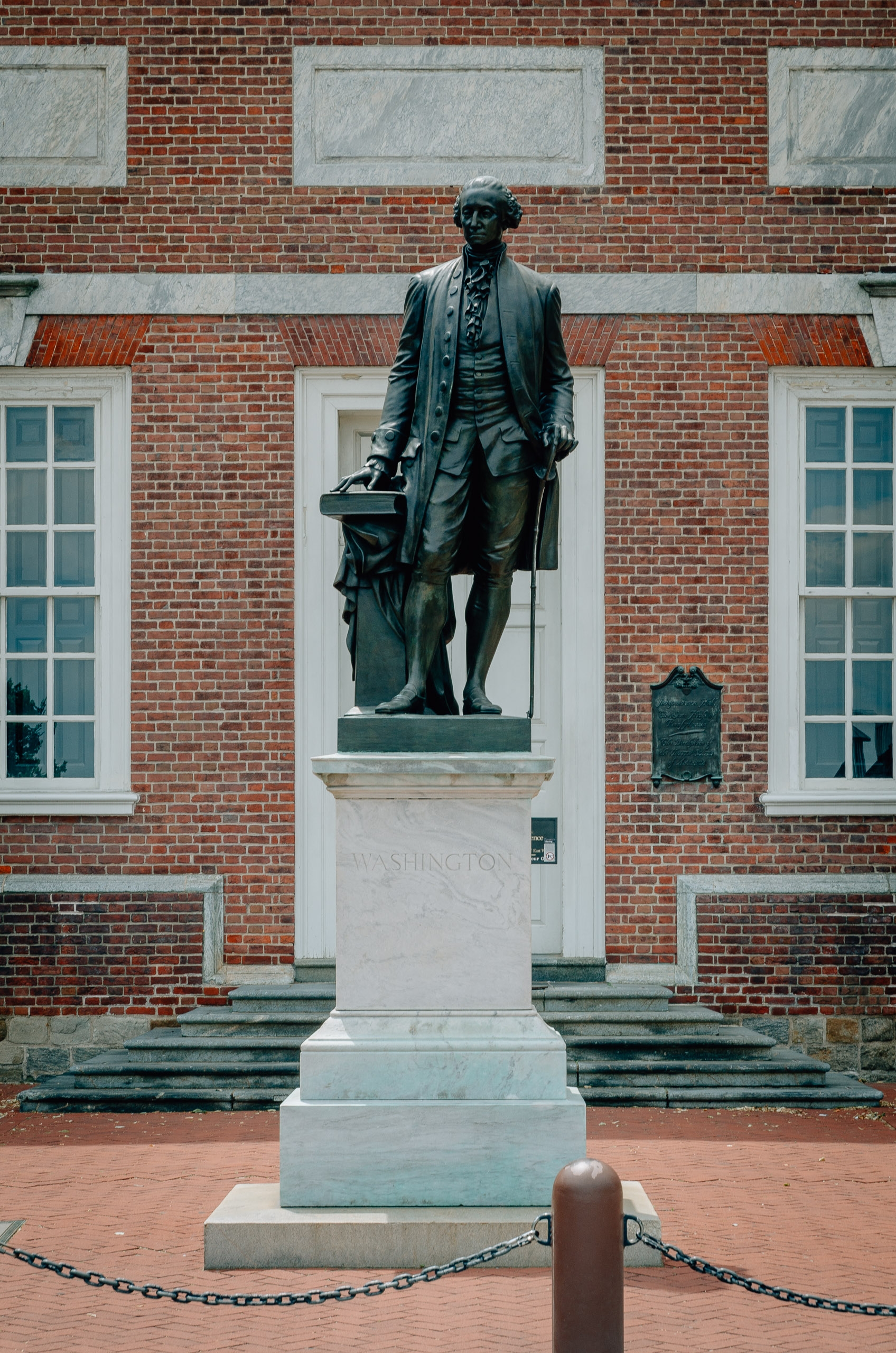 A statue of George Washington, president of the Constitutional Convention

Given the holiday weekend, there were many visitors to the historic sights. The Park Service does a good job of providing docents to answer questions, tours of each of the sites, maps and background reading materials and no shortage of individuals whose sole ambition appears to be to dress in period costume. The kids loved this stuff, and that includes the two of us. 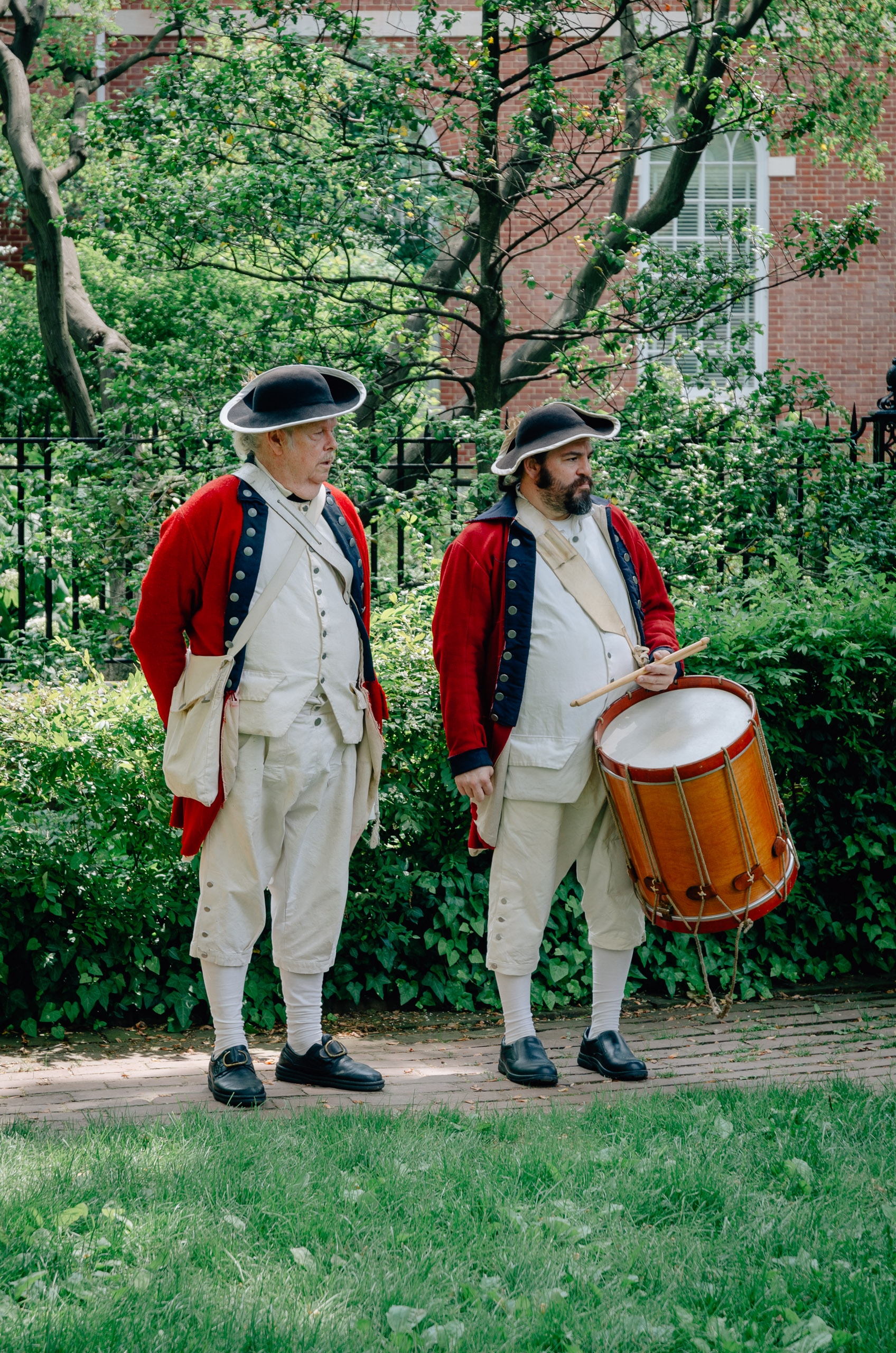 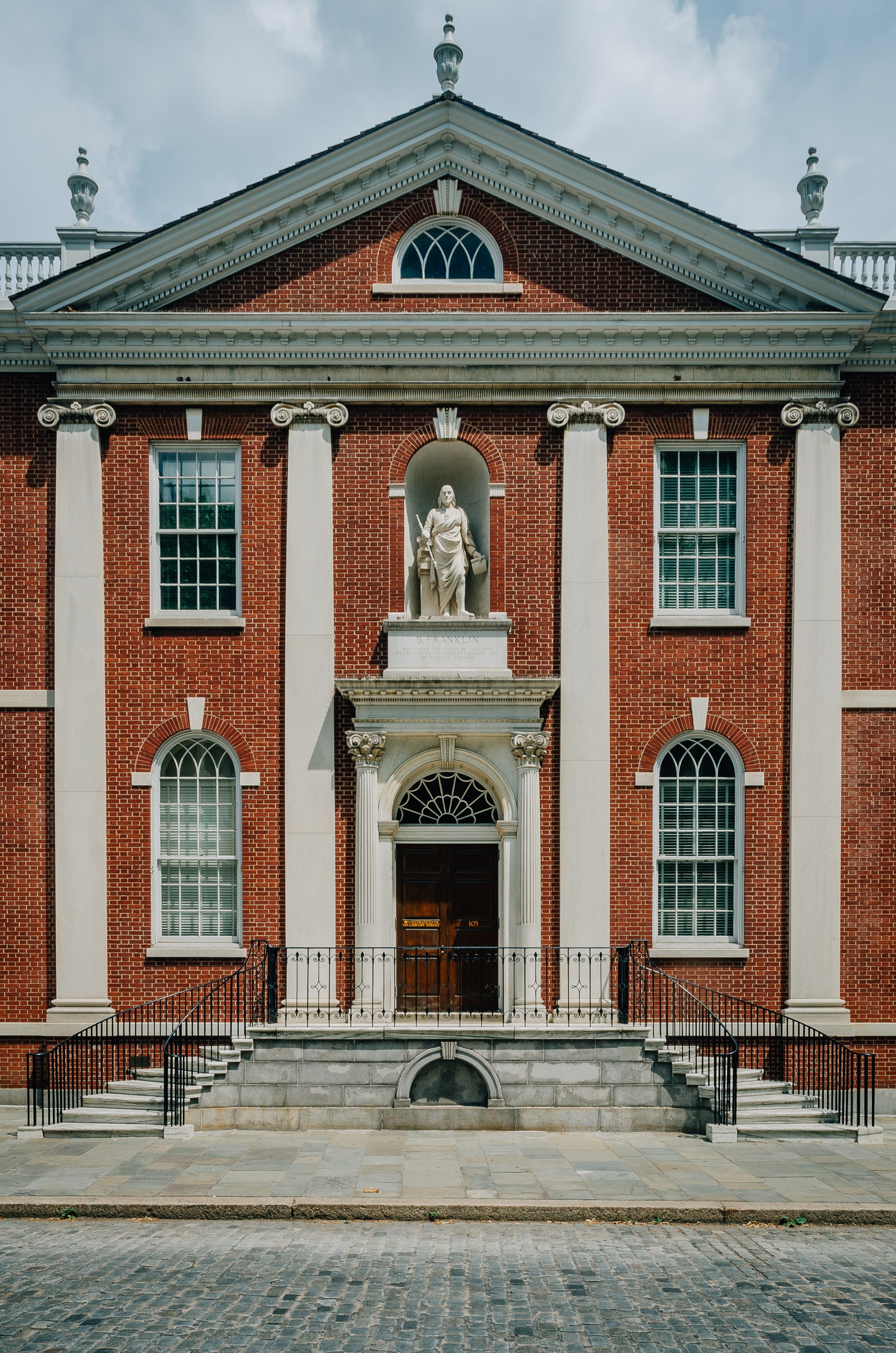 A statue honoring Ben Franklin (there are many)

About ten years ago, the Liberty Bell was moved to its current home on display in Liberty Center. You'll need to queue in a long line and file your way through a number of exhibits about the bell, before seeing it on display in a large, open glass-walled enclosure with a nice backdrop of Independence Hall across the street. The bell, with its famous crack, is more of a symbol than a participant in historic events. It broke not long after being installed and hasn't been used for much of its life, but with its inspiring inscription and as a symbol of freedom, it has enjoyed a rich second career long after retirement.

There persists a myth about the source of the the bell's crack. Its been said that upon hearing the Declaration of Independence, the newly-emboldened patriots' fervor for freedom caused them to ring the bell with such passion and enthusiasm that they shattered the copper bell! That didn't happen, but it does fit nicely with the revisionist narrative of the Founders as a bunch of machine gun-toting, ass-kicking action heroes (read about Sarah Palin's innovative account of Paul Revere's ride through Boston). 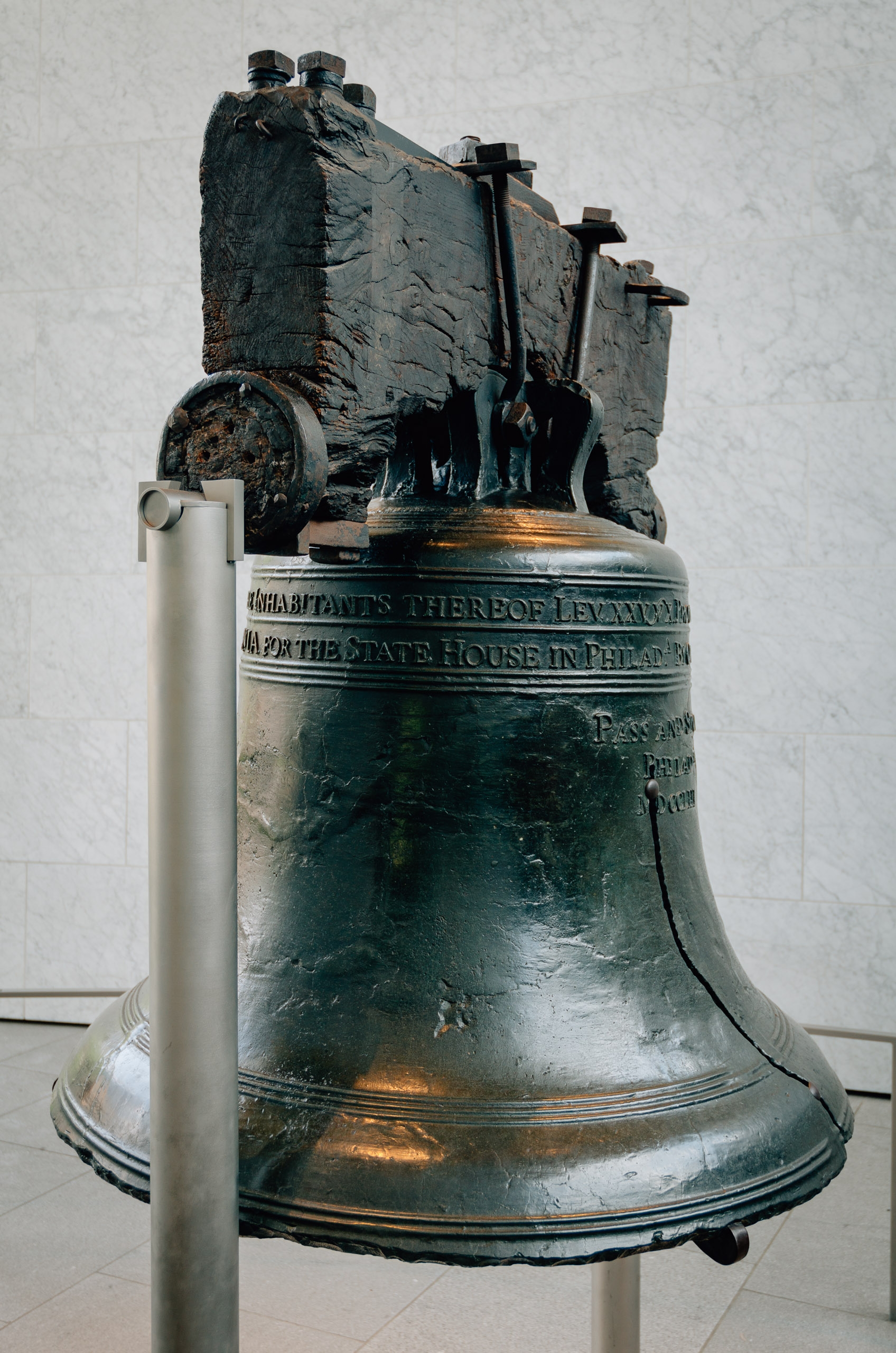 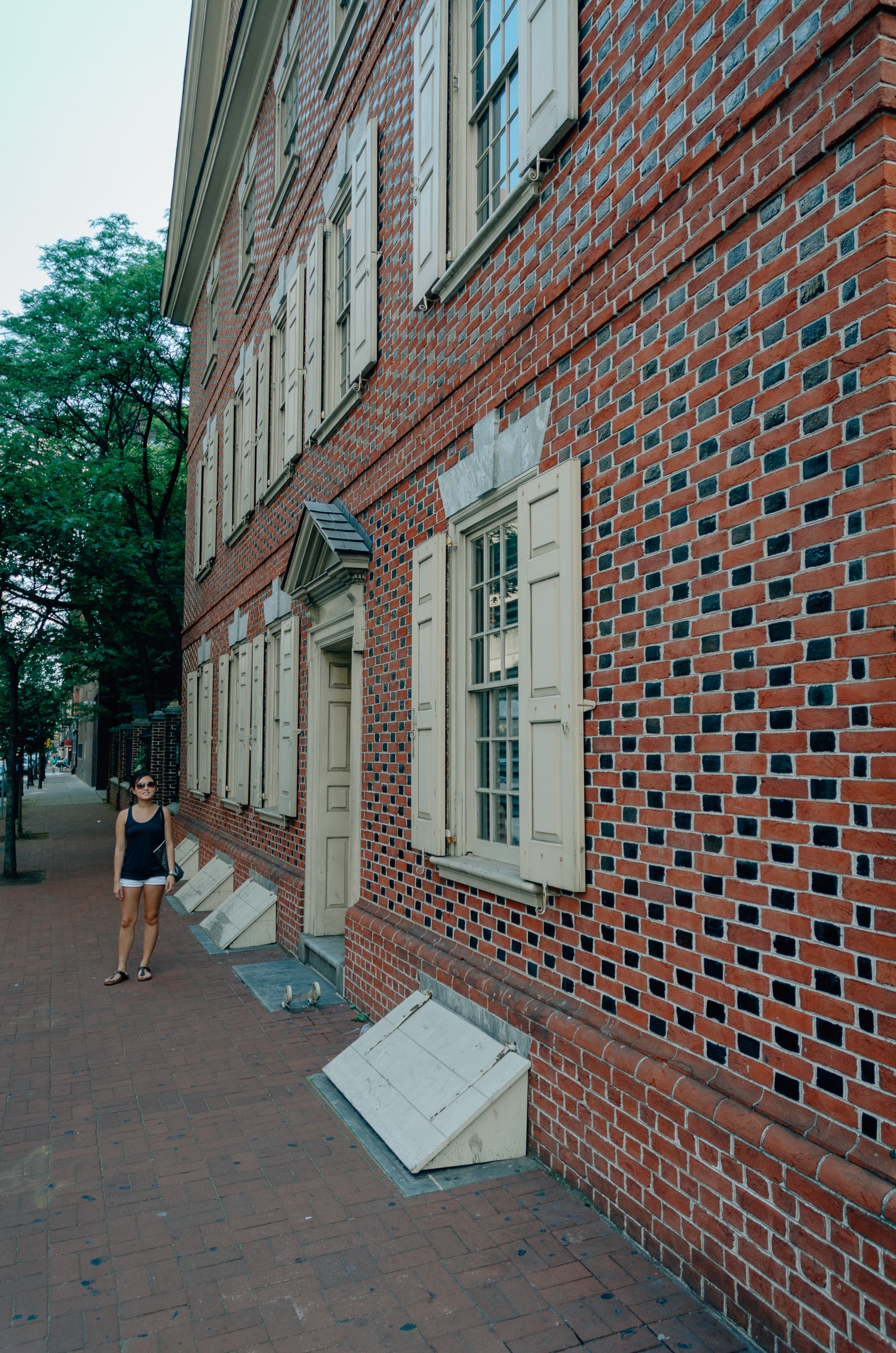 The house were the Declaration of Independence was written

The two most significant events in US history both took place in essentially the same place; the signing of the Declaration of Independence in 1776, and the drafting and signing of the United States Constitution in 1787. Originally the colonies were organized under the Articles of Confederation, but that arrangement proved to be too impractical and unworkable, so 22 delegates were appointed to meet in Philadelphia in 1787 to write a new constitution that would organize the colonies into states, and establish a stronger central government. That process took several months, and included much heated debate resulting in a governing document that still serves us well to this date.

At the time, the US Constitution was unique in that it expressly put the responsibility of the State in the hands of its citizens, and divided governmental power among separate but equal powers with no singular authority. Without a monarch or religious figure as the head of State, it would be to the citizens to determine the country's direction. This seems like an obvious arrangement today, but at the time it was, well, quite revolutionary.

Touring Independence Hall with your guide, you visit the rooms where the debate and drafting took place, and the original rooms housing the first term of the US Supreme Court. The rooms have been preserved as they looked at the time, and although much of the furniture are period antiques, some pieces such as the chair used by George Washington, who presided as President of the Constitutional Convention, remain. Unfortunately, I wasn't permitted to sit in his chair for photos. 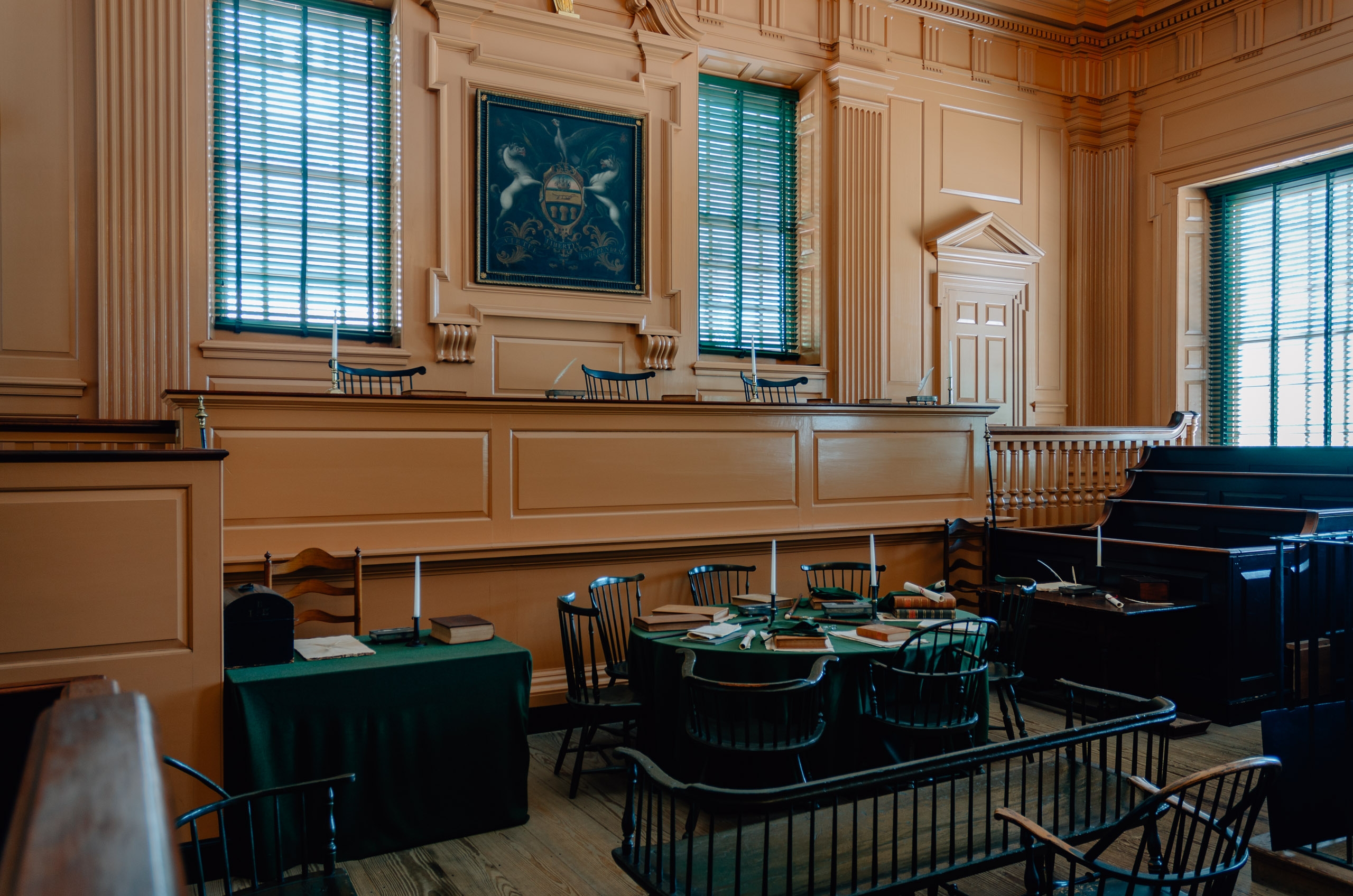 The Pennsylvania Statehouse, home to the first session of the US Supreme Court 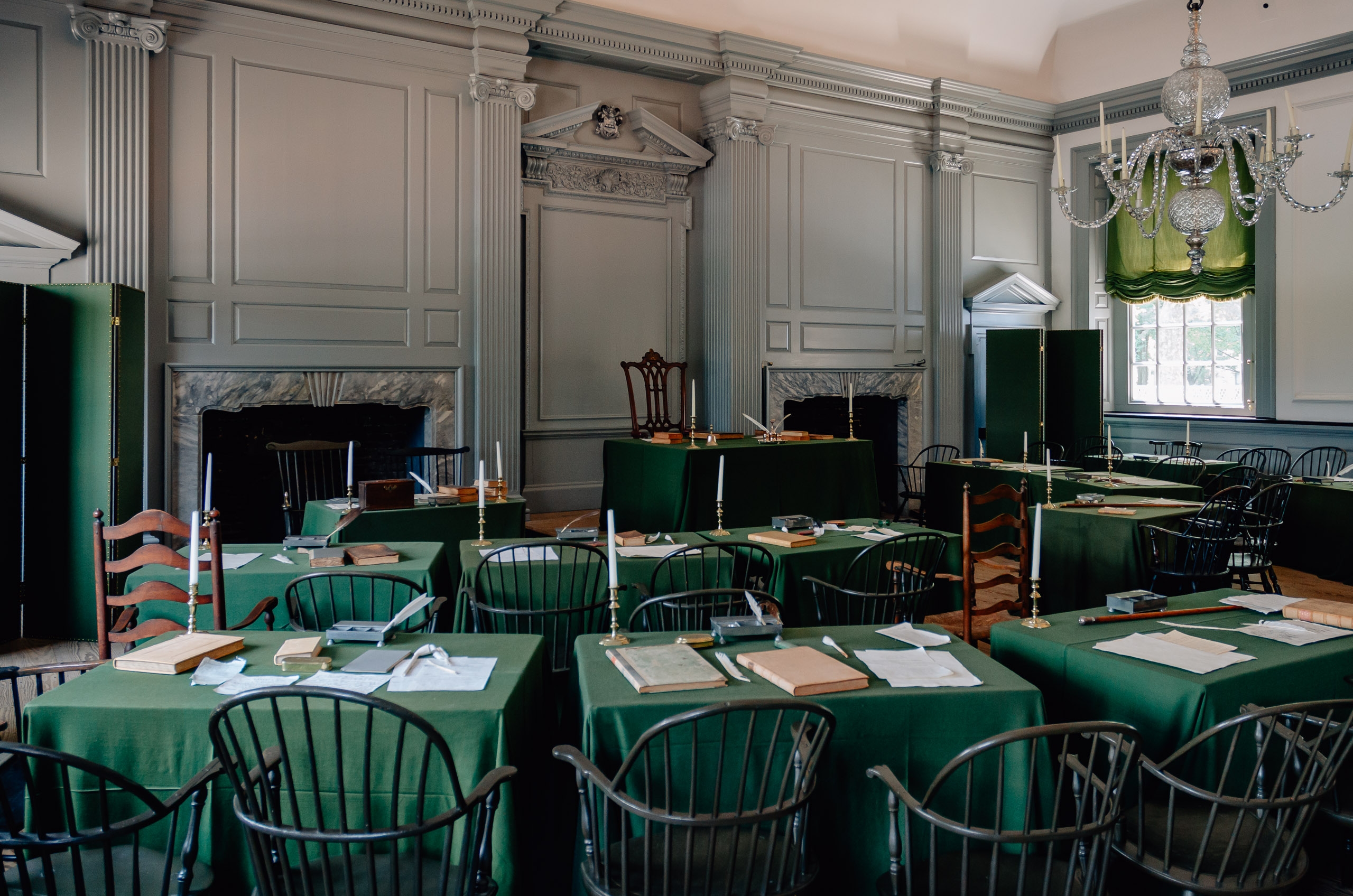 The room where the Constitution was written 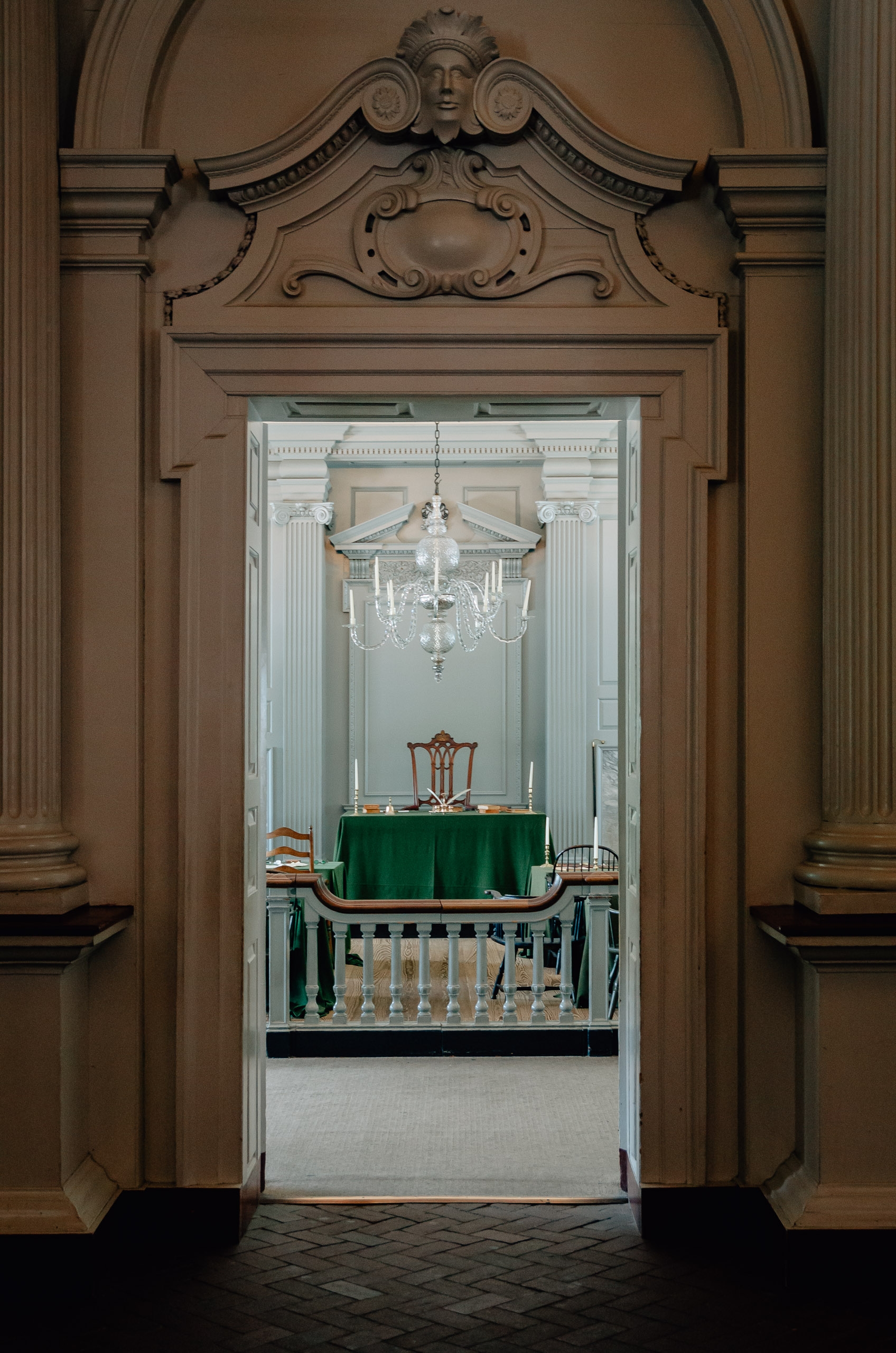 We also visited the nearby National Constitution Center, a modern, Renzo Piano-designed building that houses the history of the US Constitution and a number of exhibits that explain the constitutional process, the role of the Bill of Rights and how the interpretation of the founding document has evolved over time. A number of amateur and would-be politicians like to talk about the Constitution, and I think its appropriate for them to taken an interest in it. I even recommend they read it fully.

The National Constitution Center is one of the few area attractions that charges an admission fee, and at $30 its a bit steep. I highly recommend it, however, and I wish we could have spent more time seeing all the exhibits. There's a terrific exhibit about the role of the Constitution and the Bill of Rights during times of war and turmoil which is especially prescient in light of the events of the past ten years.

We concluded our tours and headed back to the hotel to pick up the car and start our journey back to New York. We stopped for cheesesteaks on our way out of town. We talked to several people; locals, out-of-towners, the bellhop - and they each had varying recommendations for the City's best cheesesteak. Given the holiday, they weren't all open so we settled on Pat's. It was good but not great. Cool place, though. If you've one you loved, leave it in the comments below and we'll keep in mind for next time.

Philadelphia, like Boston, can't be beat if you're a history buff. Its close enough to New York that you could easily make a day trip of the historic sights if you weren't interested is seeing greater Philadelphia. We didn't make it to the museums, but I read and have heard they are also worthwhile. I wanted to run up the steps of the museum and do my Rocky pose in front of the statue, but that will have to be on another visit.

Thanks to Robbin for being a terrific guide, and for the many swell recommendations!
tags: national parks, philadelphia, us travel, weekend excursions from nyc