dark mode
Visit to Buffalo and Niagara Falls
March 29, 2010
We decided to take a quick, impromptu Spring vacation to burn up vacation days and see some sights that frankly have been low on the list, but things we wanted to do nonetheless.  For the next 8 days, we'll be traveling across Southeast Canada on a good old fashioned road trip.   We left NYC Friday night and went to Jessica's parents to pick up their shiny new Honda CRV.  We expect to put about 1,500 miles on this car.

We headed Northwest from Congers, NY for our first stop in Buffalo, NY.  Buffalo is technically not in Canada, but had good reason to stop there.  Its hard to believe seeing it today, but Buffalo was once home to more millionaires than any city in the US.  When the Erie Canal opened, commerce and mercantile flocked to the area to capitalize on moving goods from America's heartland to Europe and beyond.  The turn of the century was a big boon for Buffalo, and many of the country's most notable architects had commissions there.  For this reason, its worth a stop if you're in the area to see real gems of American architecture. 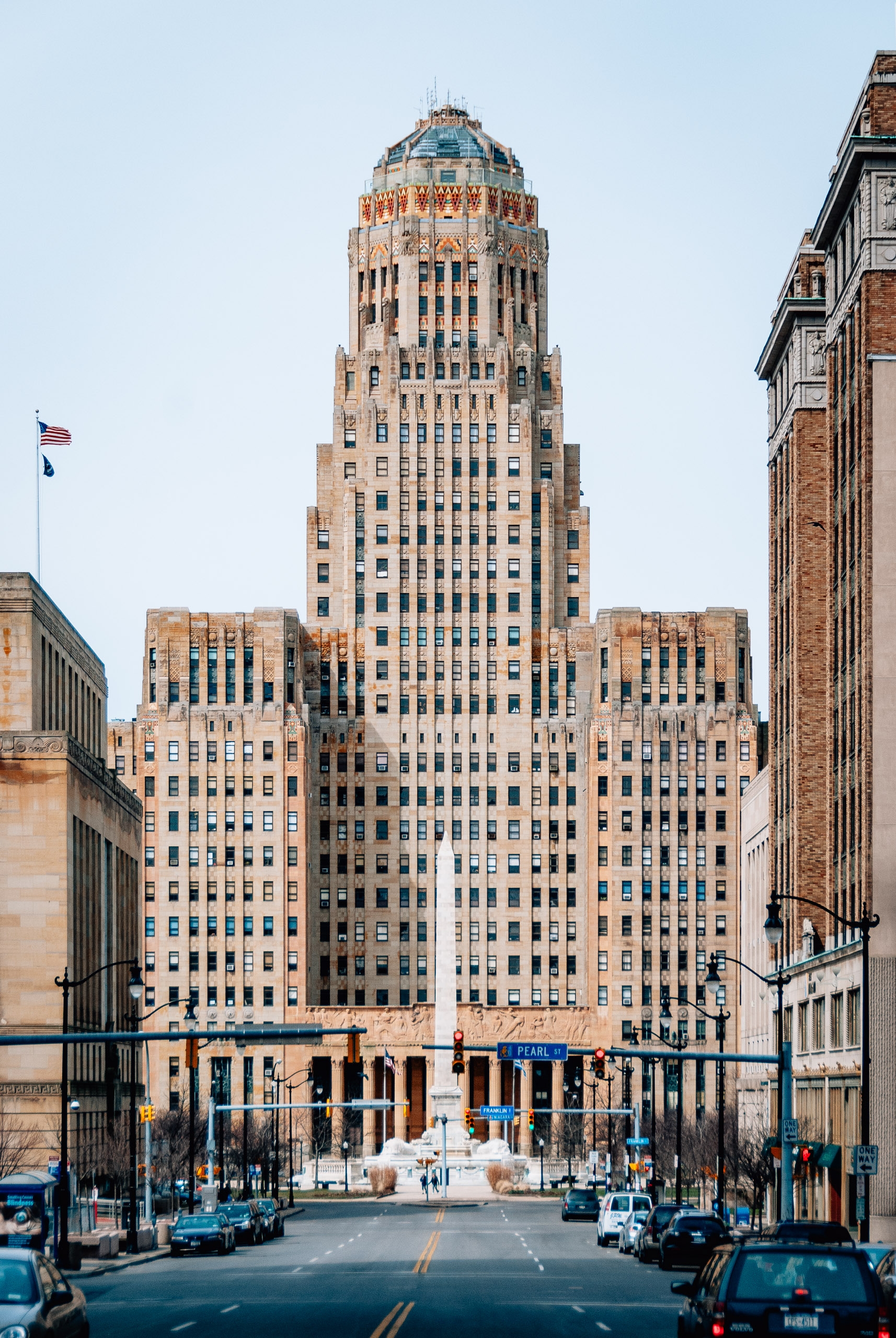 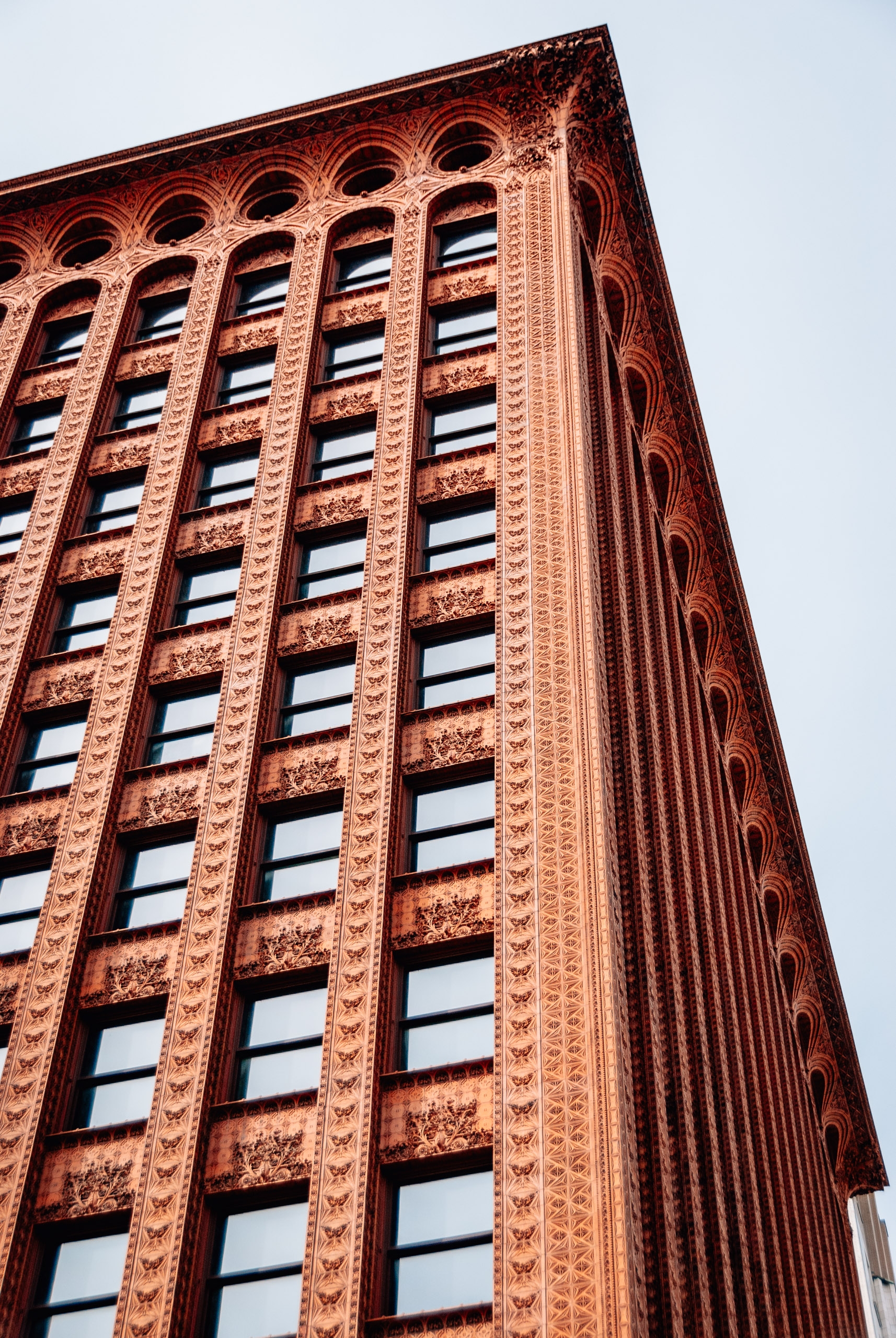 Sadly, though, the good times have long gone for Buffalo.  Its downtown on Saturday was a barren, desolate place with a few hearty souls like us doing an architectural walking tour, and a number of homeless people (ah, just like home in San Francisco).  The city has been working hard to re-capture its mojo, but I don't see that happening anytime soon. 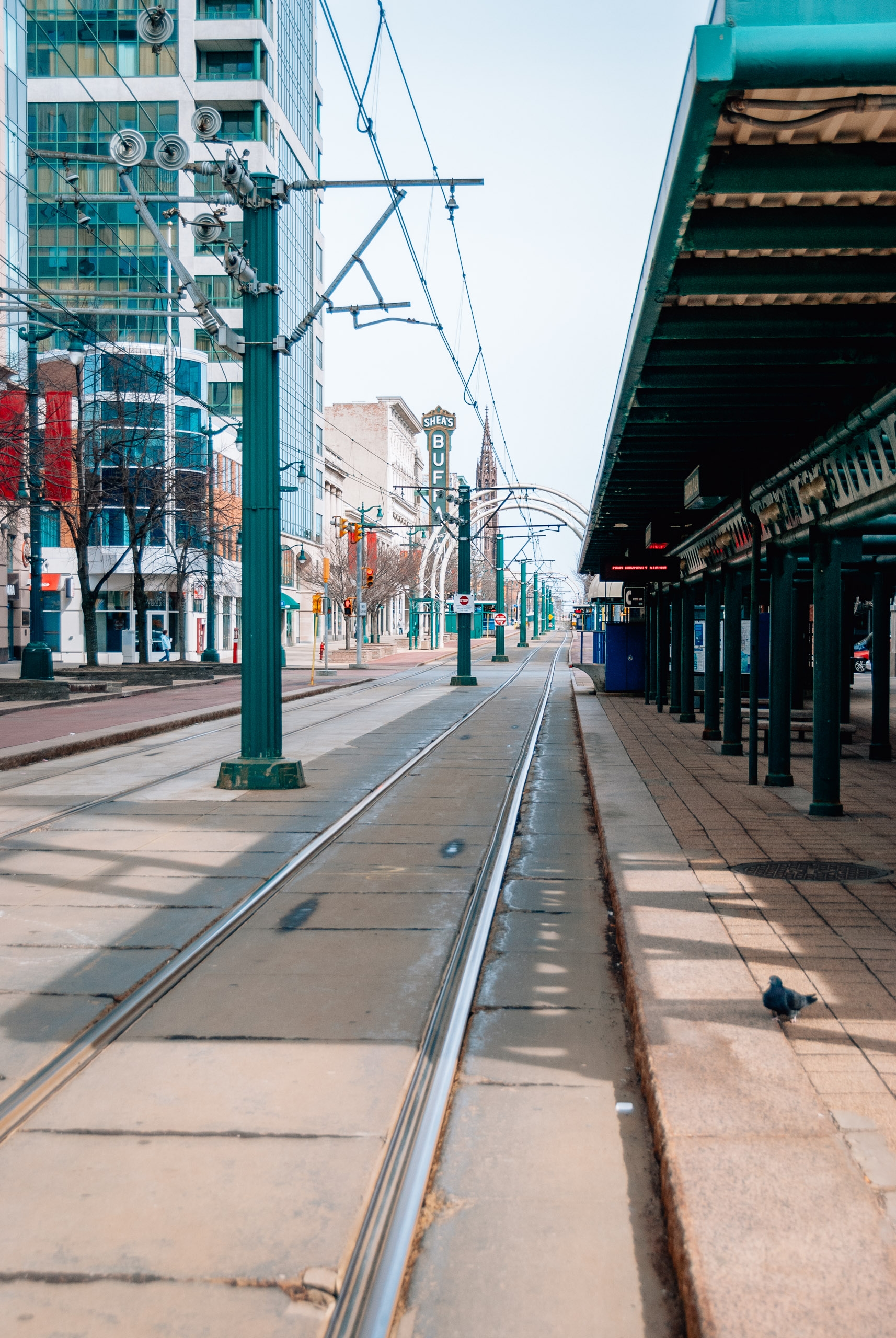 Buffalo is a city you can enjoy all to yourself.

Probably an even bigger draw to Buffalo, though, is the Anchor Bar, the original home to the famous Buffalo chicken wing.  Today the restaurant and bar are huge, and draw crowds upon opening every day.  Cross-town rival Duff's claims to the title of "best buffalo wing" according to the kids at the Food Network, but Anchor has a very respectable offering, and I mean really, it was the first.  We had lunch of about 20 wings,and to ensure we got our vegetables, we also got some baked potato skins.  They also serve McSorley's beer on tap, another fine NYC institution. 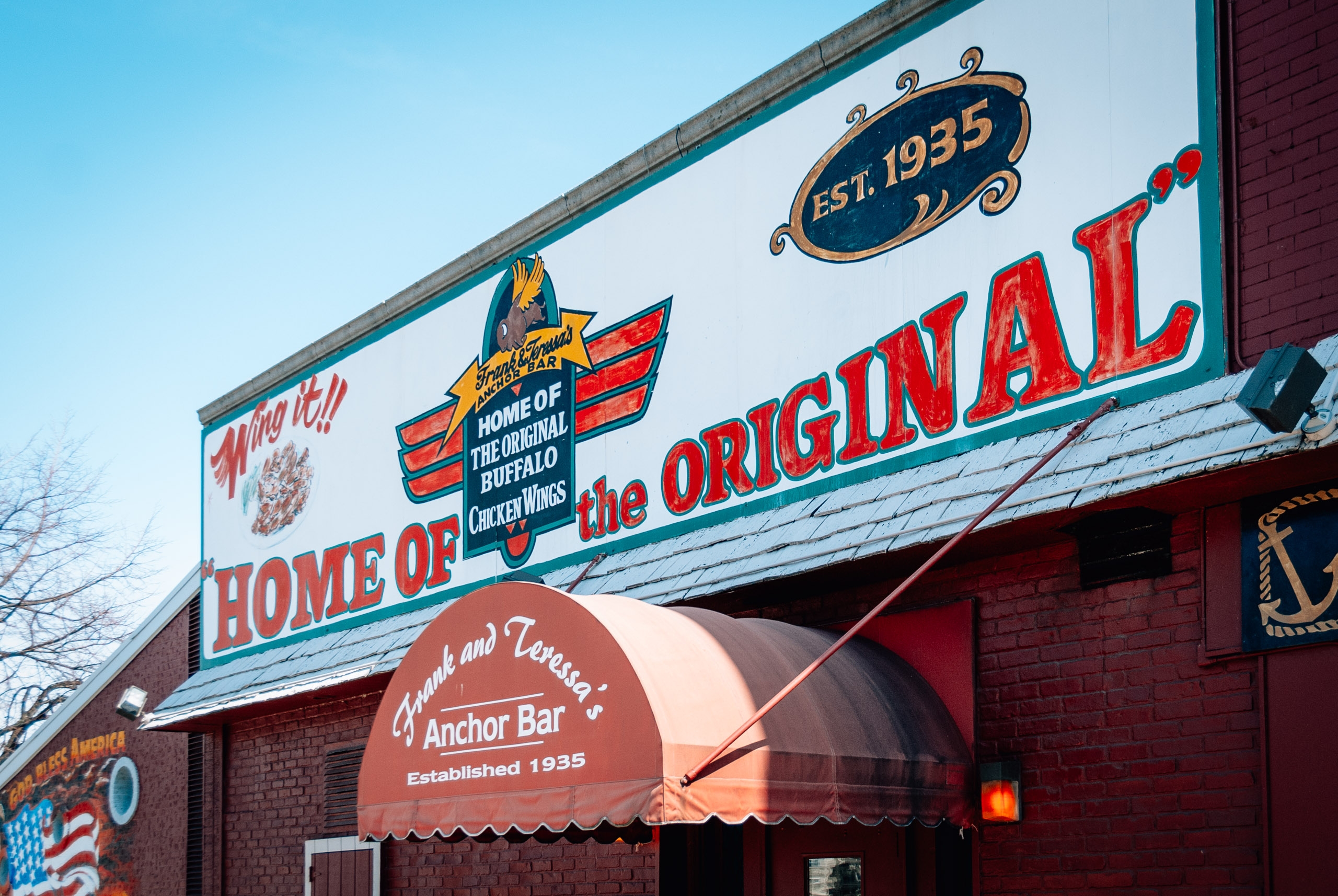 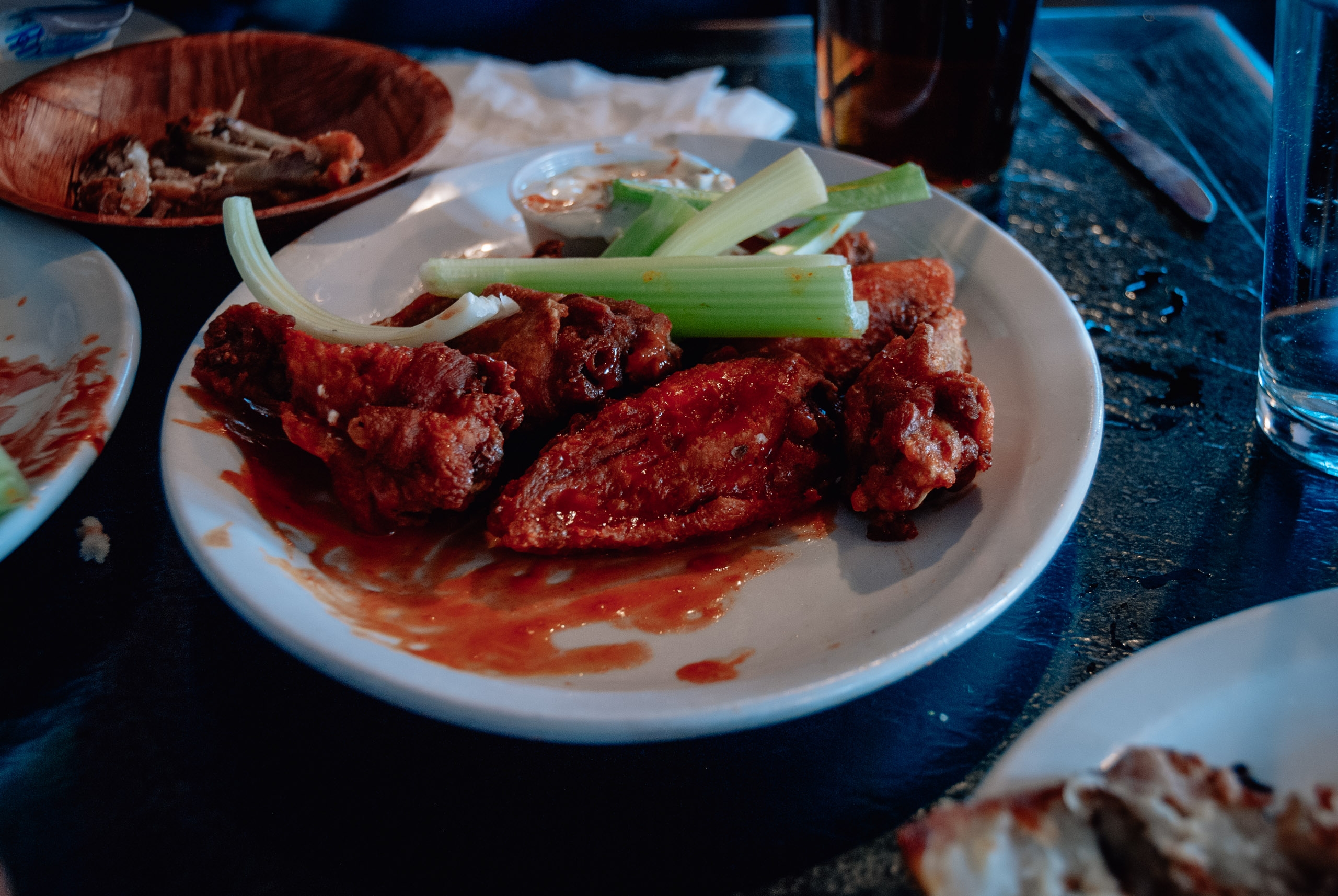 We forgot to do a "before" picture, but here are the wings half-way.

After lunch, our next stop was the American side of Niagara Falls.  Famous for honeymooners the world over, the American side of the falls is also facing some pretty dire challenges.  By this I mean to say, what a dump.  Run down motels, closed restaurants, boarded up shops and broken asphalt roads don't exactly make this the gem of the New York State Parks system.  Contrast this with the Canadian side, with its gleaming, skyscraper hotels looking over the falls, casinos, restaurants and shopping malls.  The Canadian strategy of a "mini-Vegas" overlooking the falls seems to be working out for them.   While it has certainly lost its park-like setting, it does make for a more worthwhile destination if you want to stay in a hotel that isn't lice-ridden or falling apart.

We spent a few hours on the American side before crossing the Rainbow Bridge onto the Canadian side.  We apparently didn't answer the screening questions quickly or satisfactorily enough as we were flagged for additional interrogation by Canadian immigration.  That 30 minute delay aside, we spent another few hours on touring the falls on the Canadian side. 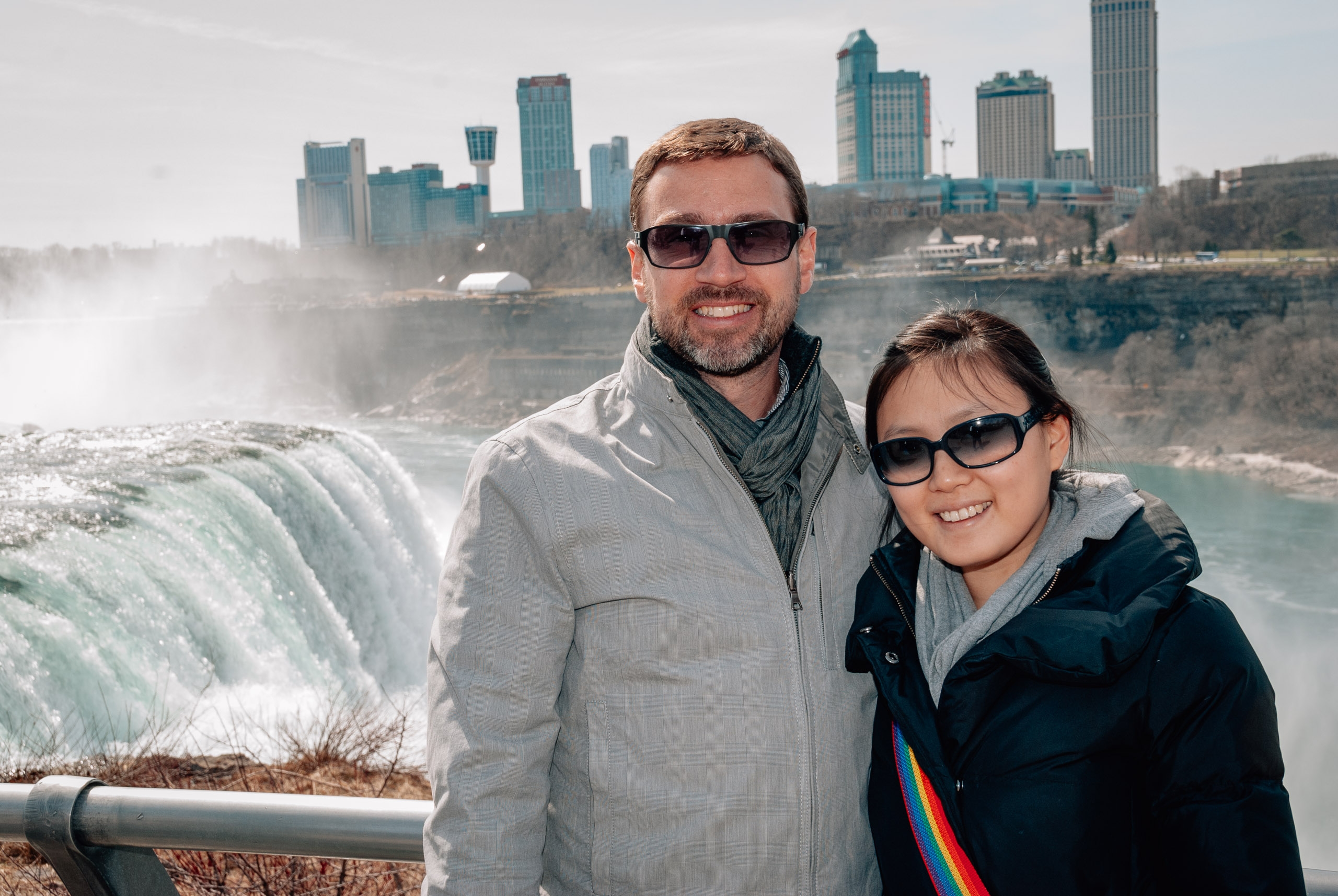 Overlooking the falls on the American side 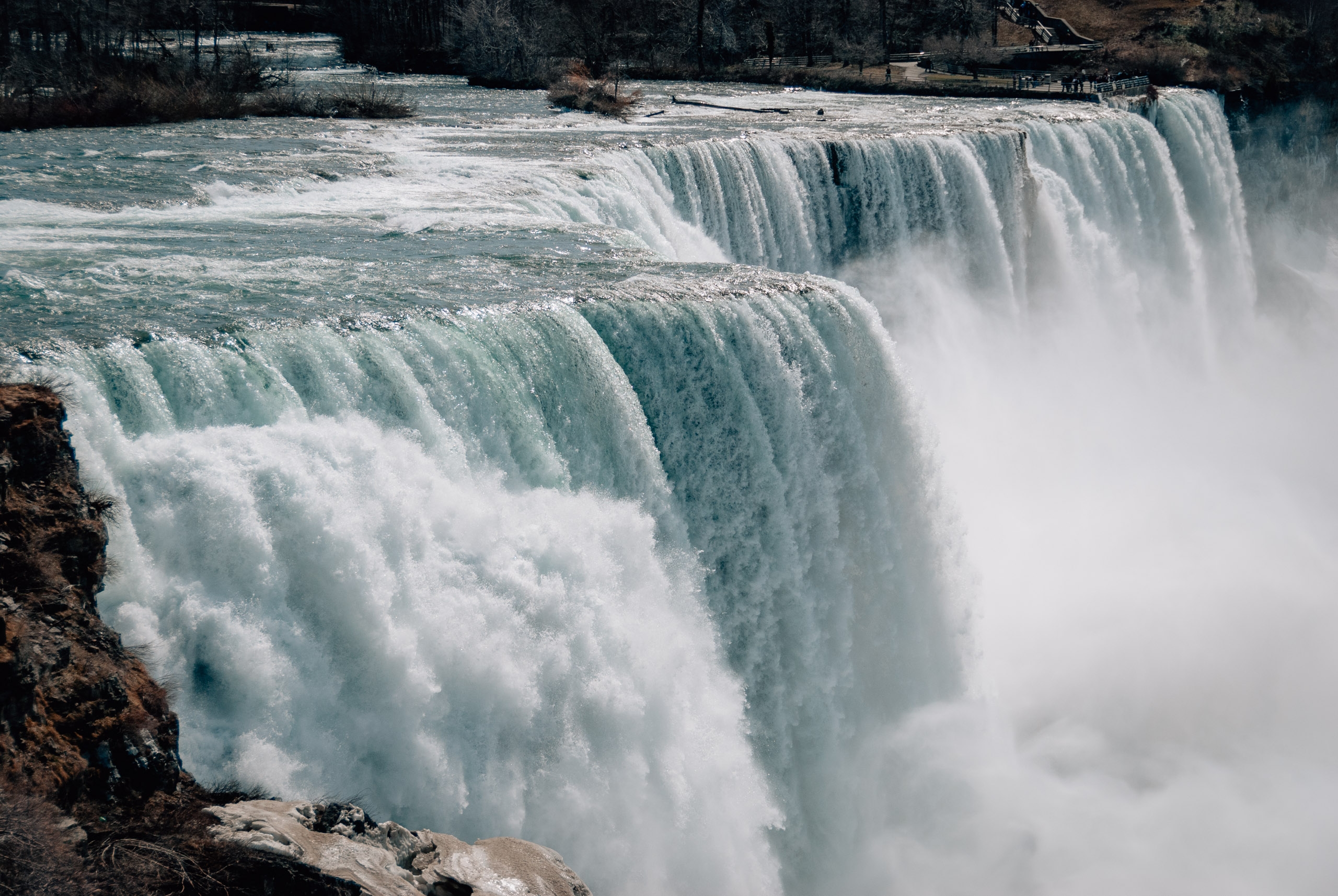 
We weren't able to ride the Maid of the Mist as that doesn't open until May when the ice subsides.  We did however go down behind the falls which is pretty amazing to stand behind such a massive wall of moving water (27,000 gallons per second).  We had planned to travel over the falls in a barrel, but apparently they don't do that anymore. 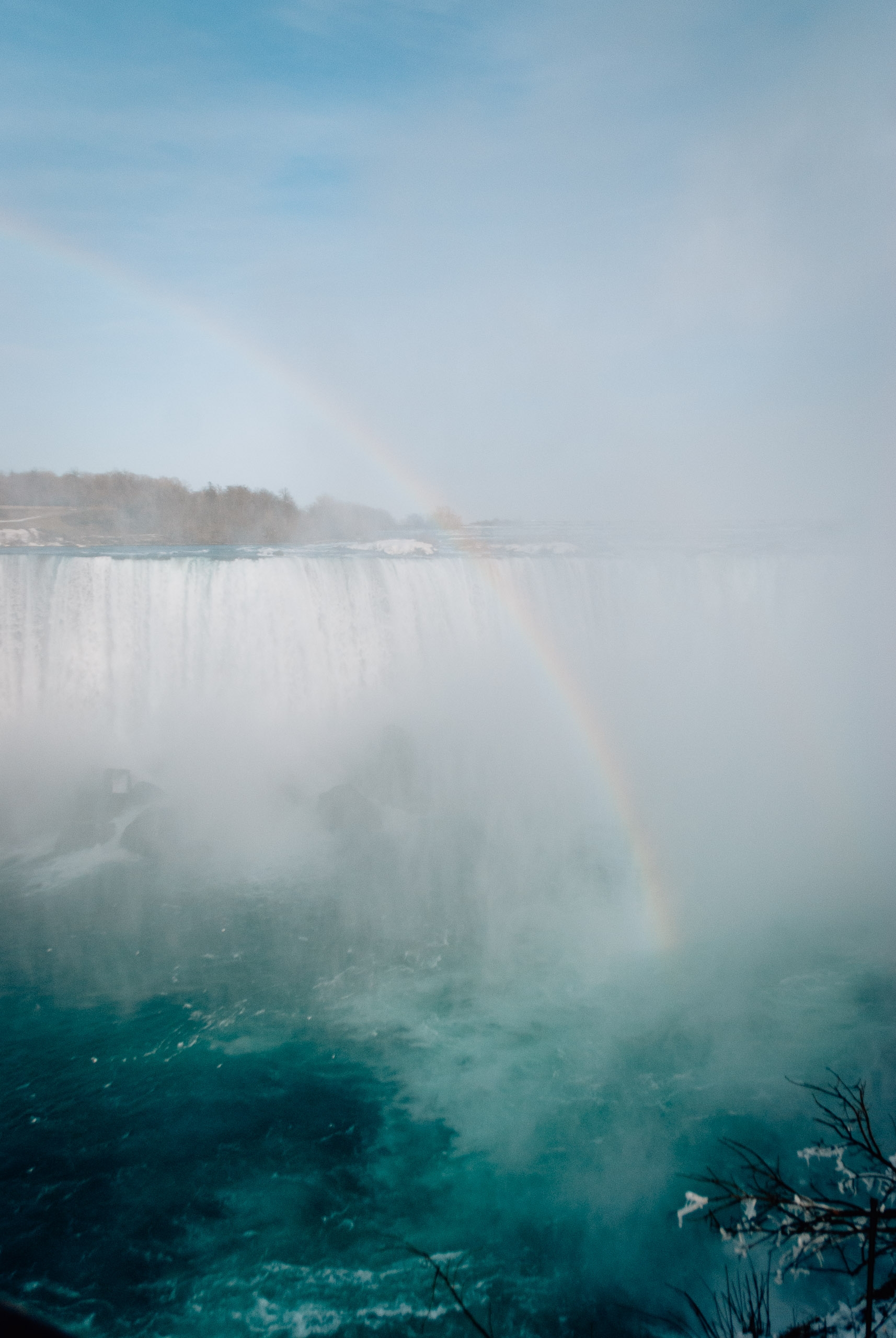 All sunshine and rainbows on the Canadian side. 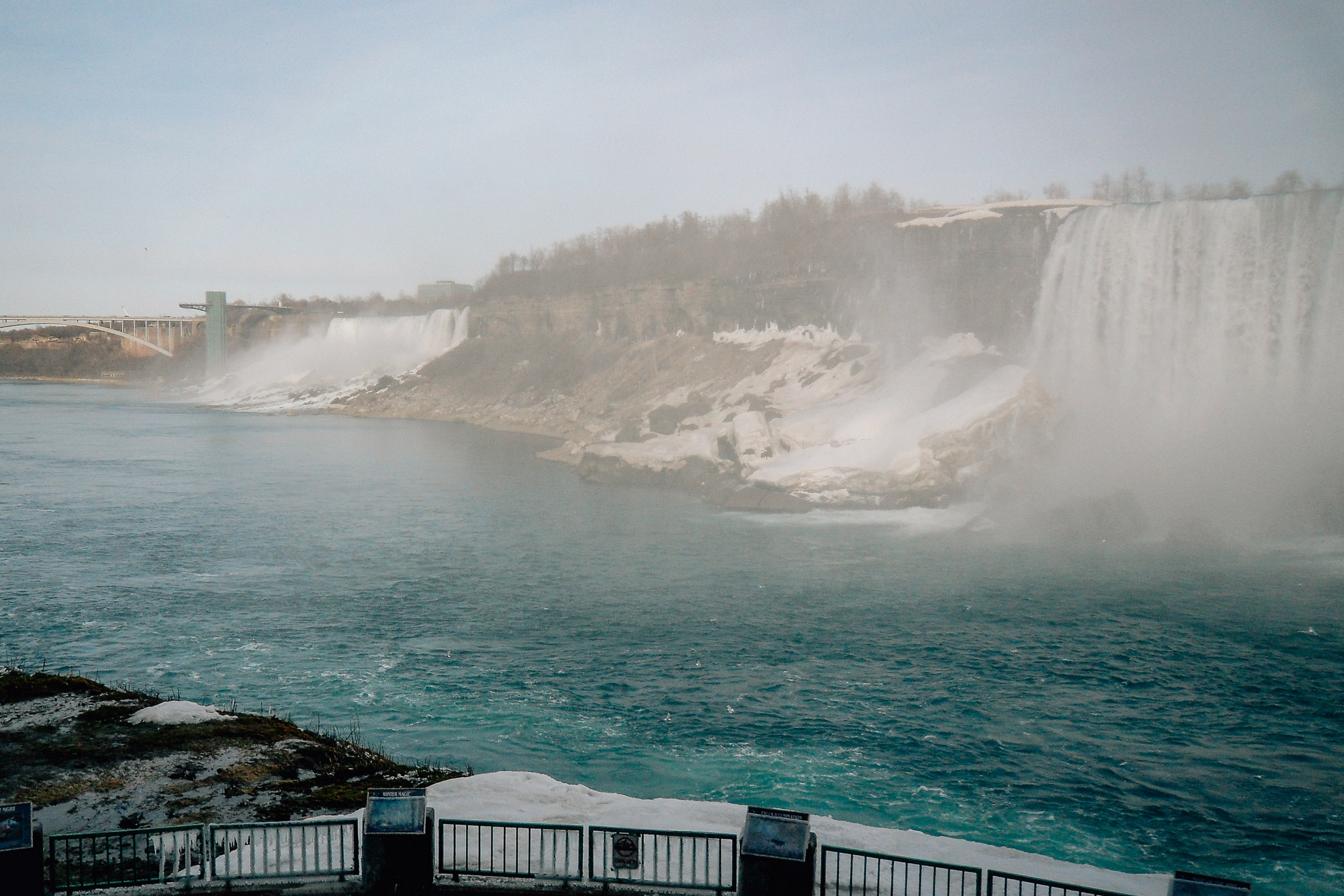 The view of the falls from behind.


We got to our hotel around 6PM exhausted from the 4AM departure from Congers, the 6 hour drive and all the sightseeing.  After a quick nap, we were off to the Fallsview Casino for some Wheel of Fortune slots and the all-you-can-eat Grand Buffet (the term, "Grand" is a generous one). 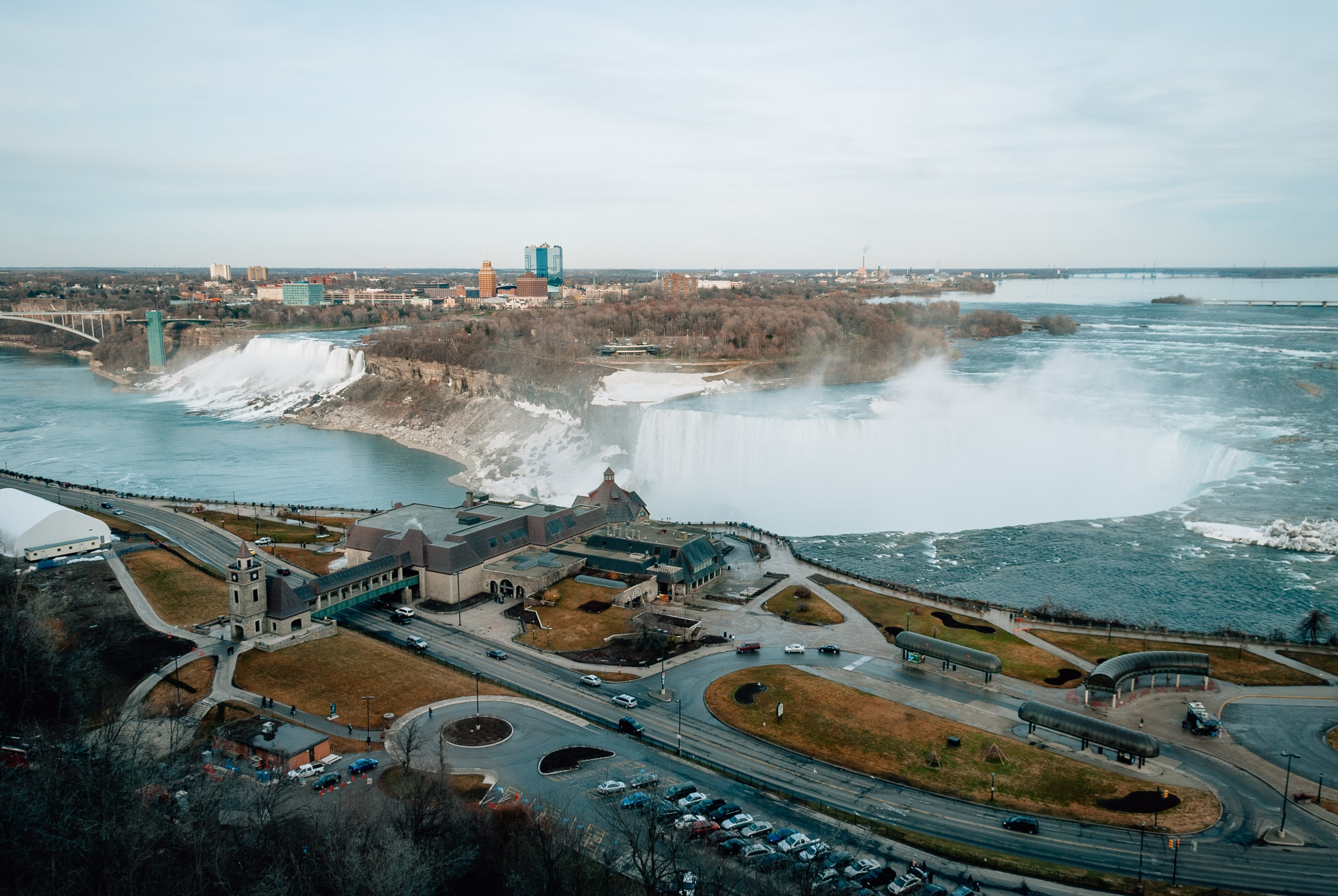 The view from our hotel.

I defintely recommend a stop at Niagara.  Its a bit out of the way to other destinations in New York, but only 90 minutes from Toronto and 20 minutes from God-forsaken Buffalo, NY.  The next day we depart from Niagara Falls, Canada all the way to Montreal, for the rest of our Quebec tour.
tags: canada, travelogue