dark mode
Suki on the Mend
August 30, 2009
For those who follow this blog, you know that Suki is something of a minor internet celebrity on kriskoeller.com; featured in photos, videos and stories of varying interest.  Three weeks ago Suki was in pretty dire shape but is doing much better today.  Read on.

Three weeks ago Friday, Suki and Jessica were hanging out at home when Suki's hind left leg suddenly went limp.  She was having a hard time walking on it, and after few minutes didn't seem able to use it all.  We assumed she had twisted a knee or tweaked her hip in some way, so took her to the emergency vet (as it was Friday evening, her regular vet was unavailable).  At the vet, the doctors were able to determine that there was not conventional injury at play.  By now here entire left leg was paralyzed and she was unable to feel any pain or sensation in her foot.  This was concerning for a number of reasons.  The doctors assumed this could be due to a blood clot in the spine, a ruptured disc or another type of spinal injury where a disc bursts and damages the adjacent spinal tissue.  Their recommendation was to keep her overnight for observation.  The surmised that if the paralysis spread, it was likely not a blood clot, but a spinal injury.  They would perform a CT scan in the morning and advise on next steps based on her condition.  We left her in the emergency hospital overnight and awaited news.

The next morning we learned that her condition had in fact worsened.  By now she was completely paralyzed in the lower half of her body, unable to move her legs or feel pain in her feet.  The CT scan revealed that it was not damaged disc and thus surgery wasn't warranted.  Avoiding surgery was good news, but in situations where surgery is appropriate the recovery prognosis is very good, 80-90% likelihood of a complete recovery.  By now we were faced with a more serious situation, one where it was likely that a burst disc injured the spinal cord.  Depending on the extent of the injury, she might recover on her own or not at all.  Worse, if the damage was extensive enough the paralysis could spread up the spine, impeding breathing and the result would be fatal.   Because surgery was not an option at this point so we would have to wait and see.   The doctor was careful to advise us that in cases with severe paralysis including a loss of sensation, the prognosis for recovery was less than 50%.

During visiting hours on Saturday

By Sunday morning there had been little change in her condition.  She was on a pretty strong dosage of steroids and anti-inflammatory medications to help heal the spine.  The hope was that if any recovery were to start, we would need to see signs of improvement fairly quickly.  We made some calls to the UC Davis School of Veterinary Medicine and consulted with their neurologist.  He largely affirmed the diagnosis we had been given, and agreed that time and observation were best for the time being.  We had considered moving her to UC Davis on Monday morning based on her condition.

Sunday night was probably the low point of this entire ordeal.  Because it was the weekend, different doctors were examining her at different points over the weekend and each trying to make a subjective assessment of whether her condition had improved or worsened.  By Sunday night the doctor told us that he felt her condition had in fact worsened.  He also advised us the the probability of her regaining her mobility was very low (around 25%; again a subjective prognosis). By the time we went to bed Sunday evening, things were looking pretty grim.

Monday morning was the turning point in her condition.  The surgeon (who examined her the Saturday prior) called and was enthusiastic (and somewhat astonished) and the improvements he was seeing that morning.  She had regained some motion in her right leg and was responding to deep pain stimulus in both legs.  They continued her medications through the day and advised that she come home that afternoon.  Though the standard of care in the emergency vet is quite good, the environment is quite stressful and all the doctors were confident she'd do better at home.  We brought her home on Monday, three days after the whole ordeal began.   She was unable to walk, unable to go to the bathroom on her own and under a great deal of stress and anxiety.

Causing trouble even in the hospital

The doctors sent us home with a small assortment of medications and regimen of physical therapy exercises to aid in her recovery.  Twice a day she has to do a series of exercises to stimulate the nerves and re-learn the motion of walking.  She also does "hydro therapy" where you lead her up and down a half-filled bath tub to assist in her walking.  Now that she gets around better, she plays ball every evening to get her exercise, mostly so she'll be tired enough to sleep through the night and not bother us.  Being in San Francisco, she also has a consulting acupuncturist and herbalist, a licensed practitioner of alternative medicine. I think we're both a bit unsure about that. 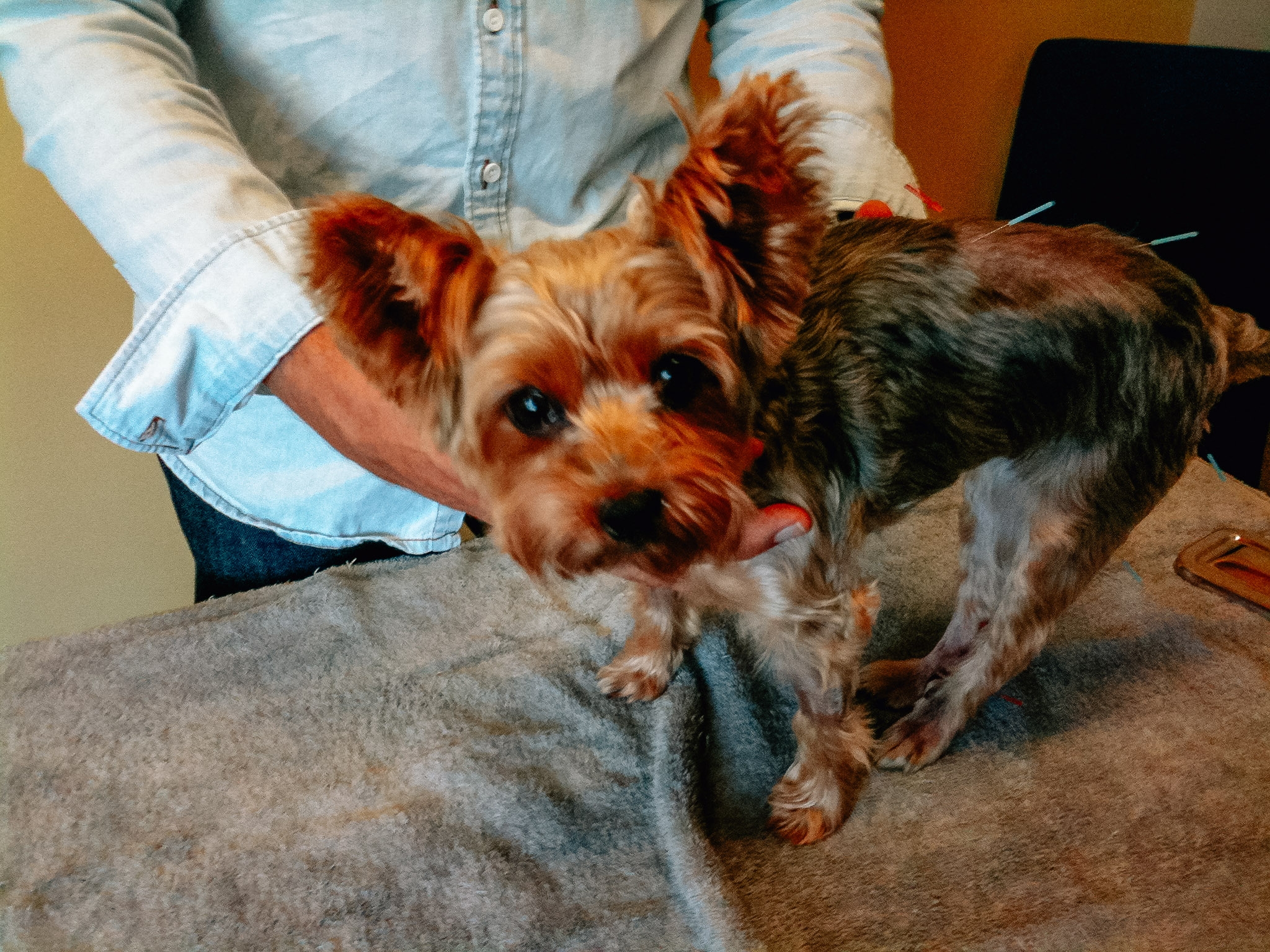 Suki gets acupuncture with good results

After two weeks of conditioning, her progress has been amazing.  Today she is able to get around easily on three legs, though still drags her back left a bit.  She's able to play ball, bark at passers by and harass her toys.  She still can't use the stairs or get up and down the furniture on her own, but every day she continues to improve.  I had to travel to Singapore for work a week later, so my mom came out to help and we were grateful for the help that first week.  Unfortunately we had to cancel our trip to Japan, but we were able to cancel our plans and we'll go another time.

Aside from wondering how she's doing, most people ask about cost.  72 hours in an emergency facility, with consultation by a surgeon, is not inexpensive.  However, its not as bad as you might think.  They give you a range of potential estimates from a likely case to a worst-case (in terms of cost).  They then require a 100% deposit for the worst-case scenario and refund you the difference.  Sadly too many people ask the doctors to do whatever is possible, only unable to confront the cost and abandon their pet.  You can get health insurance for a pet, but its typically not cost effective unless you pet has chronic health problems.  The likelihood of a relapse of this condition is exceedingly rare.

Needless to say the whole process has been stressful but seems to be on track for a happy outcome.  We both appreciate the help and support from friends and family. If you're in the neighborhood, stop by and say hello. 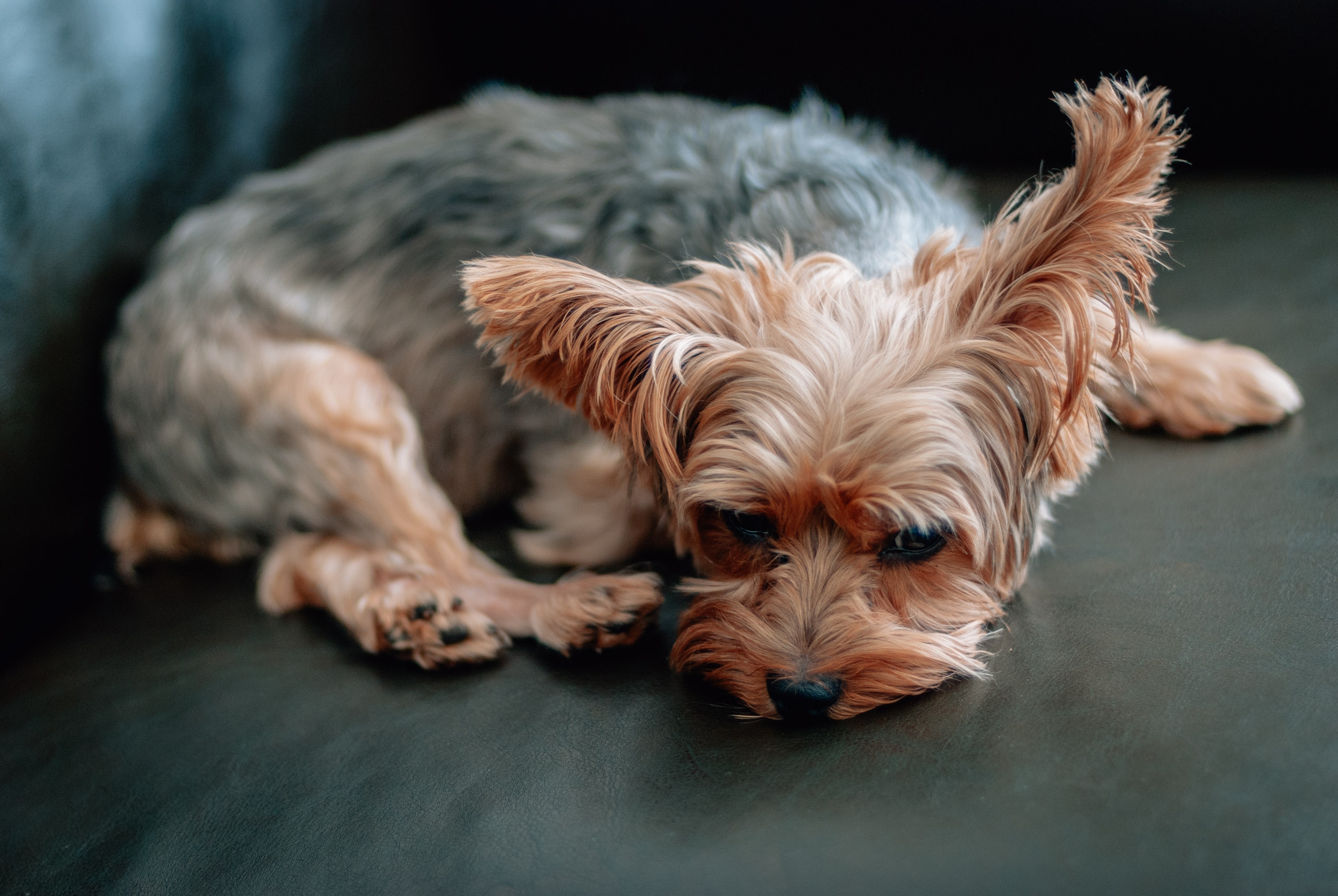 Happy to be at home
tags: suki