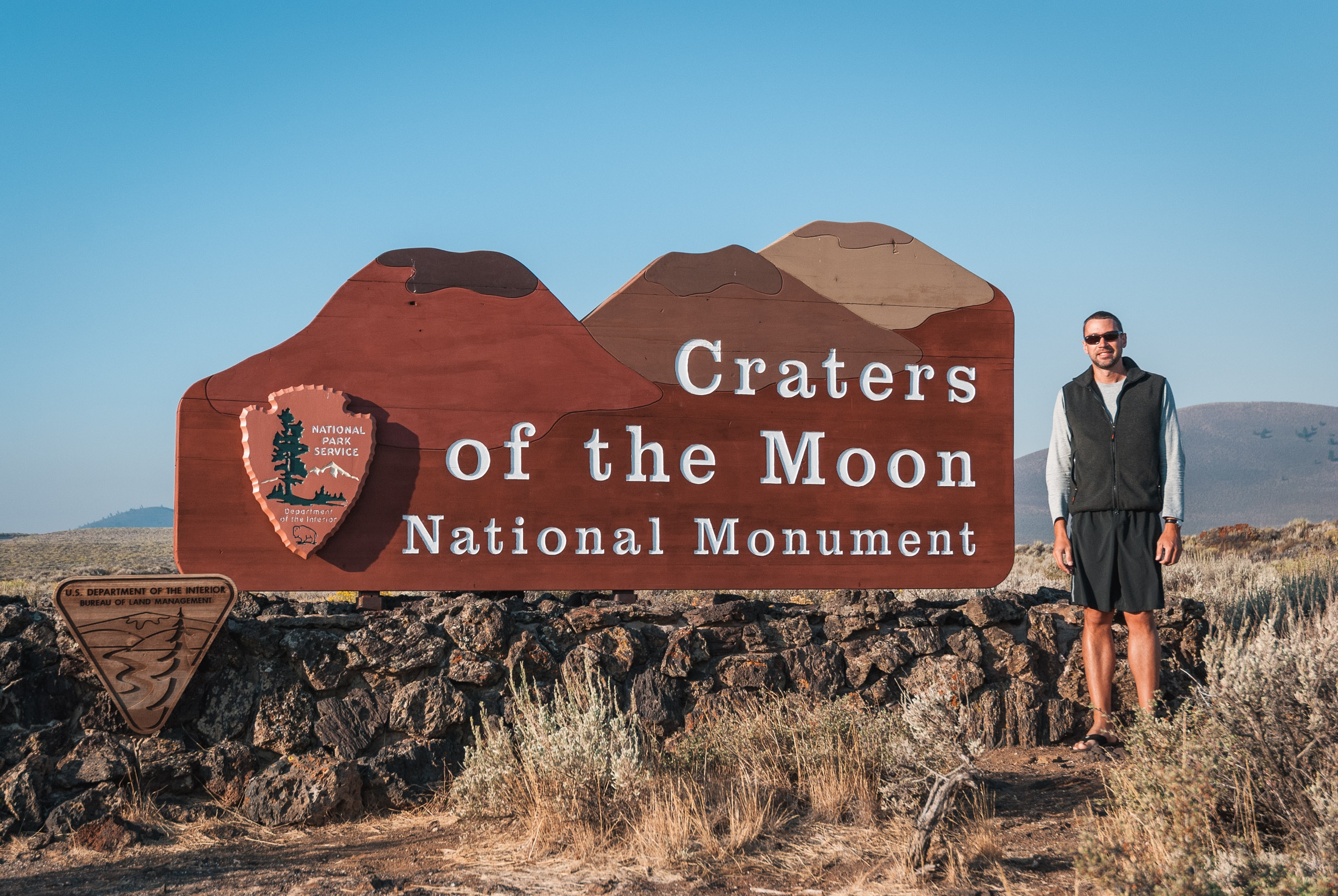 Craters of the Moon National Monument is challenging from many aspects. Located way out on a desolated stretch of Idaho state highway 93, you would have to be pretty determined to visit this site, unless you happen to be traveling from Twin Falls, Idaho to Idaho Falls, Idaho...along Highway 93 rather than the spacious interstate. In addition, unless you are an enthusiast of all things volcanic and geological, you might not appreciate the site's unique features. There is some other interesting history in the area, the vast Department of Energy research site is nearby, and you can stop by and visit EBR-1 (Experimental Breeder Reactor #1), the world's first atomic energy plant. The nearby town of Arco also holds the distinction as the world's first town to be electrified by atomic power. Note: a breeder reactor is one that, through the process of fission (releasing energy through the process of fusing atoms into molecules), produces more fissile material than it consumes. A typical byproduct of breeder reactors of interest is a specific isotope of Plutonium, the dreaded secret sauce in atomic weapons.

Nukes aside, Craters of the Moon is named for its barren, lunar-like landscape. You probably didn't need to visit it to figure that out, the name was probably enough. Unlike my previous posts which have all told of dramatic and violent volcanic pasts, Craters of the Moon has a much more subtle volcanic history. There exists below this portion of the North American plate a long fissure in the surface allowing the escape of magma to the surface. This area, known as the Great Rift, is the source of this landscape which began forming about 15,000 years ago, and last erupted about 2,000 years ago. It is the opinion of the USGS that future eruptions are unlikely.

From this fissure lava oozed onto the surface, creating a vast "lake" of barren rock and other interesting geological relics. Lava tubes, spatter cones and kipukas (viscous flows shaped by movement around older flows) mark the landscape. The preserve was named by geologist Harold Stearns who likened the scene to viewing the moon through a telescope. President Coolidge established the preserve as as national monument in 1924, protecting the land under the auspices of the 1916 Organic Act (that which established the National Park System) and under the jurisdiction of the National Park Service. 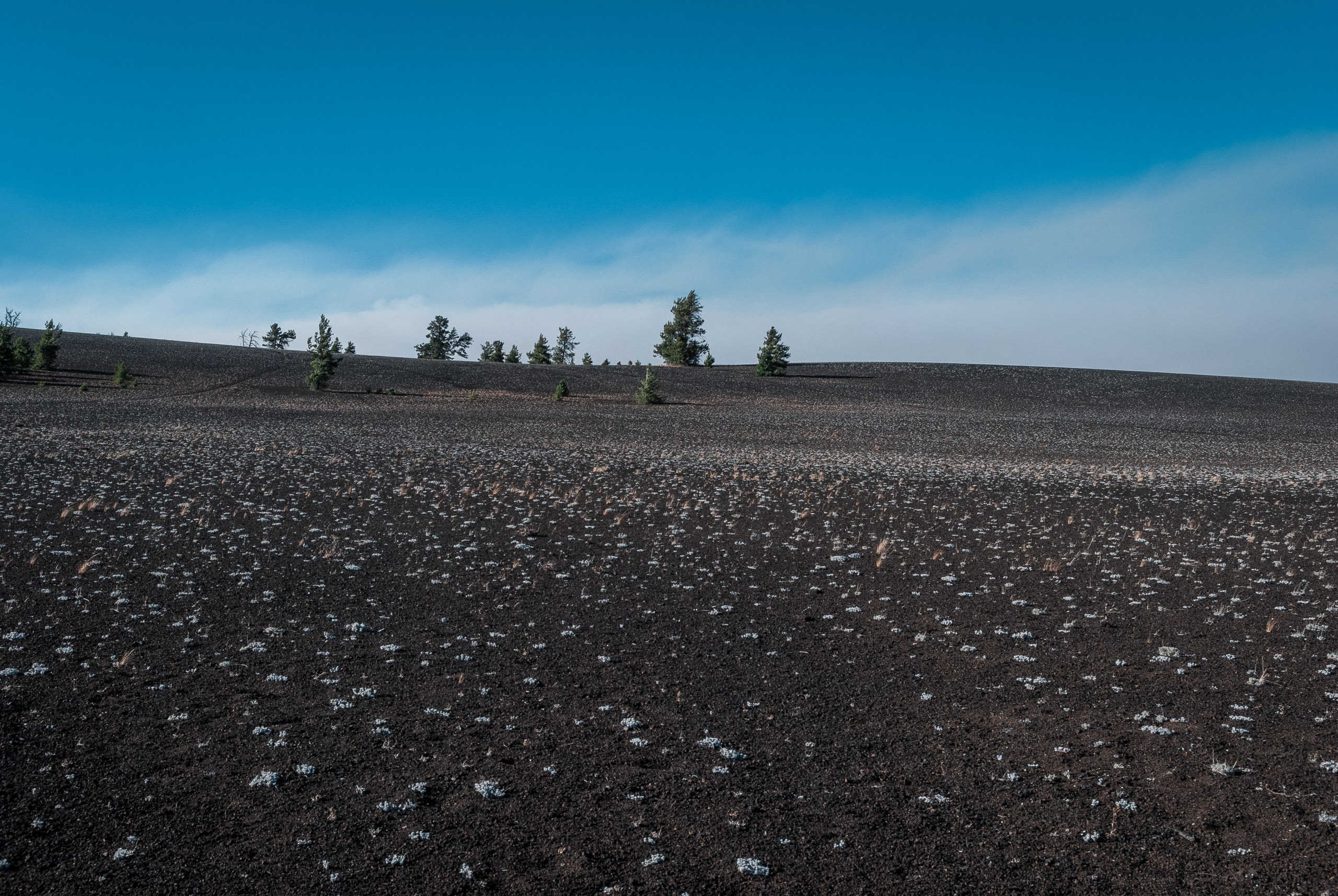 You can see the most notable features in about a half a day, including some interesting hikes to view the buckled and craggy landscape formed by slowly-oozing lava. The area is largely void of vegetation, though a few hearty plants have made impressive inroads and seem to survive despite the harsh climate. Because of the smooth, black surface, the area heats to well over 150 degrees on a typical summer day. When I arrived, it was hot, and 70 MPH gusts were blowing through the area. The dust and hot wind were pretty miserable, but as the sun began to set the entire place became eerily calm. 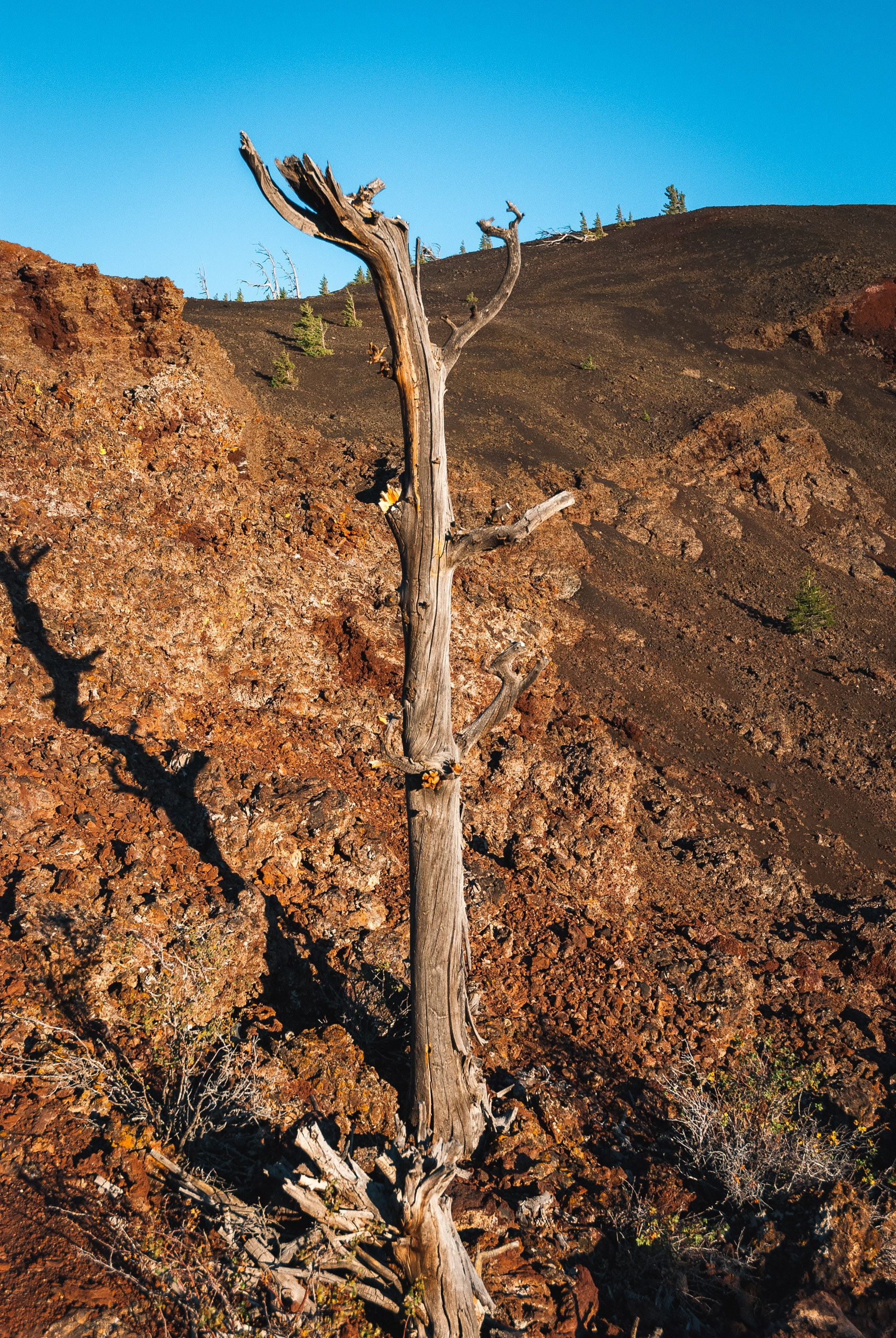 Scarce vegetation exists within the preserve

Members of NASA's Apollo program performed some of their training here, only to learn the process of collecting useful and informative rock specimens in a harsh, unfamiliar environment. The actual craters of the moon are not volcanic in origin, but are entirely the product of millions of years worth of meteor impacts.

There are a number of easy and engaging day hikes in the preserve, some take you across the vast plains of volcanic rock while others take you to and through lava tubes, which are vast under ground caves formed by super-heated, fast-moving lava. The lava moved so quickly it could not harden, only leaving its shell behind which cooled into enormous underground caverns. There are a number of trails that take you to and through these impressive underground vaults. Today these caves are home to millions of bats, who swarm out of the ground at dusk (editor's note: yuck). 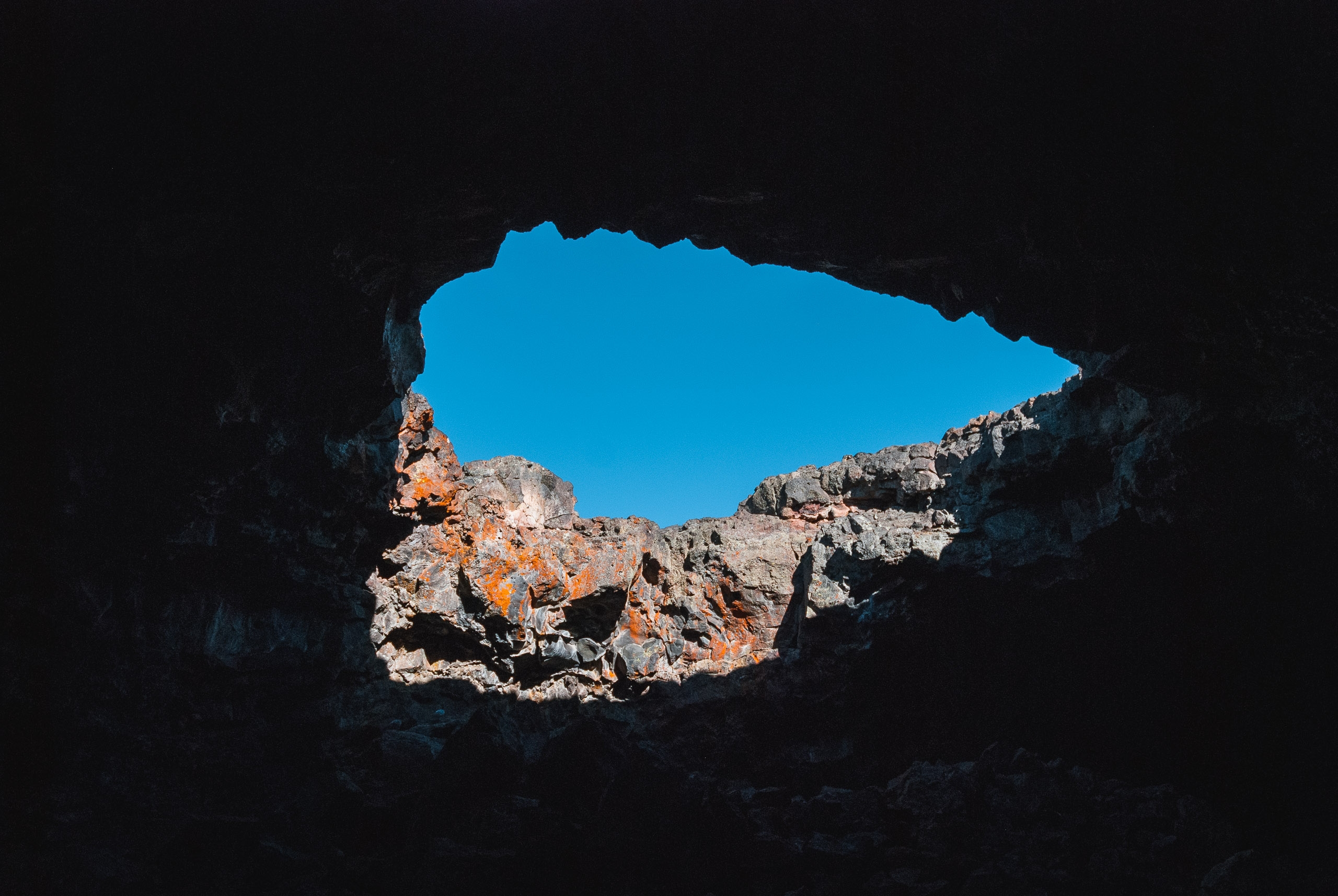 The view of the sky from inside a giant lava tube

In addition to the wind, the day I arrived Idaho was battling an enormous wildfire, the Ketchum Fire, about 100 miles northwest of the park. You could see the haze over the horizon and there was a tinge of burnt timber smell in the air. The benefit of this was a beautiful sunset. I used to live in Phoenix which used to have remarkably colorful sunsets. As the sun set over LA and it copious smog, the colors were amazing. Pollution may suck for those who breathe it, but it does make for breathtaking sunsets (no pun intended). 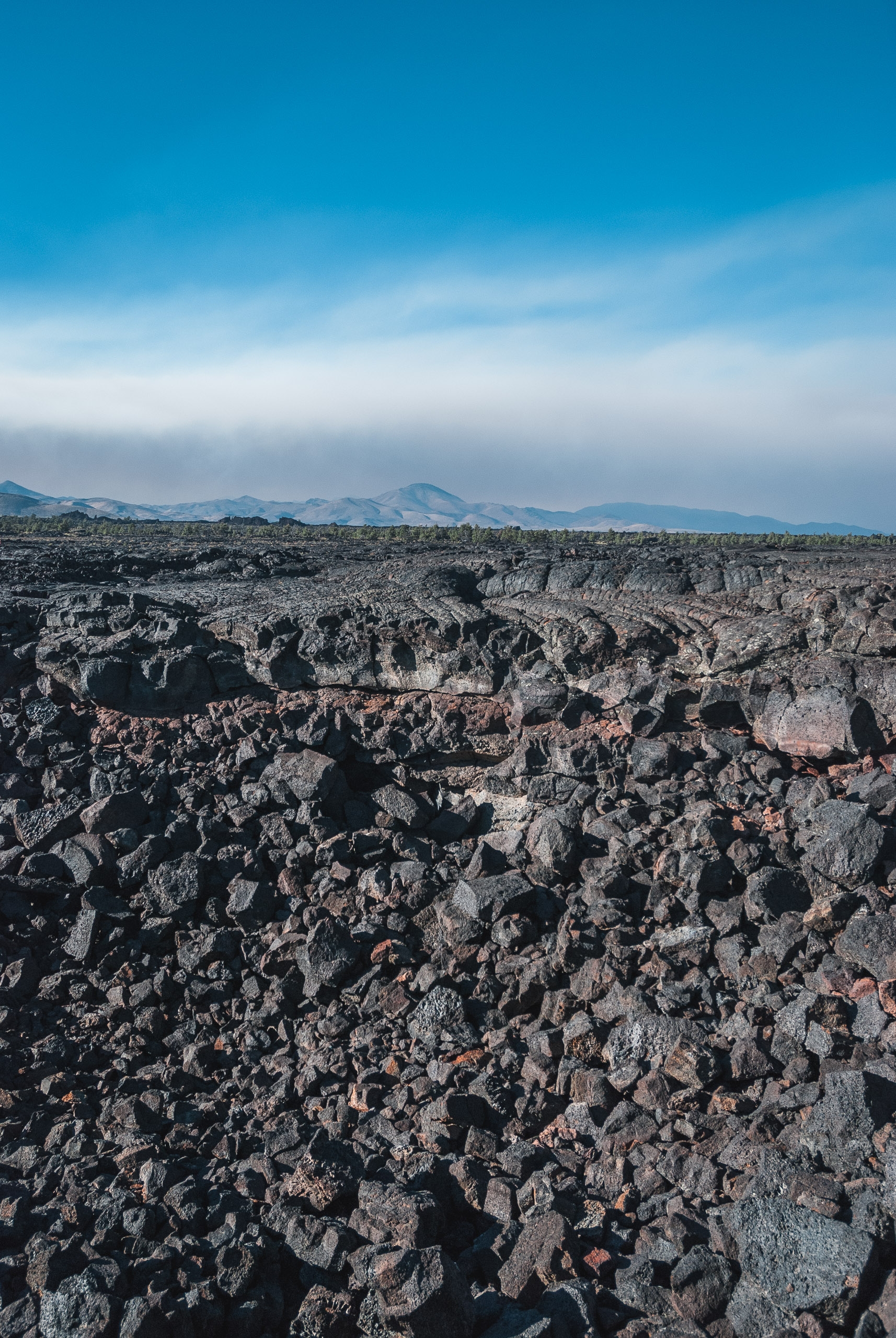 The craggy landscape with the wildfire smoke blowing over the hills 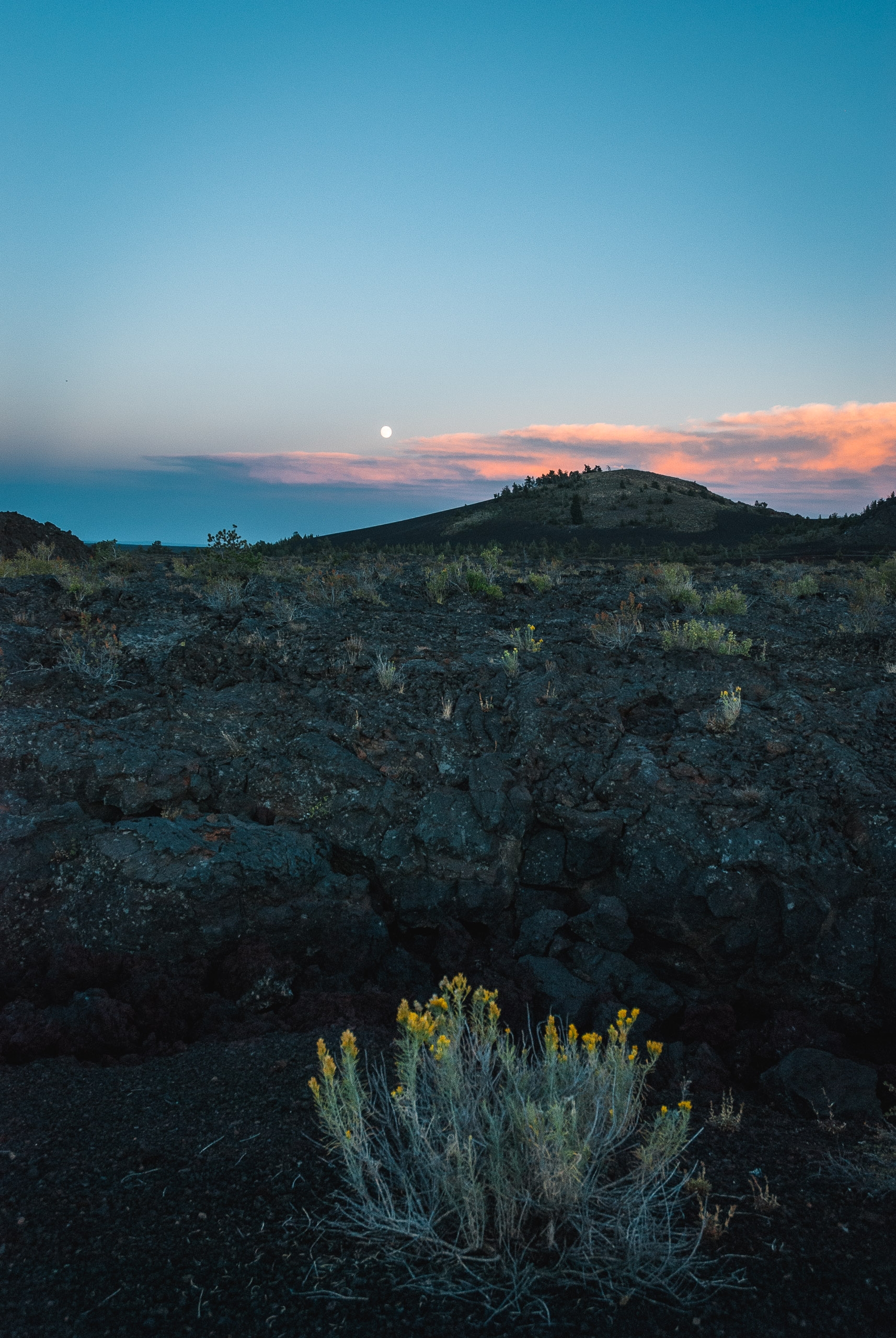 Sunset over Craters of the Moon

I don't know the recent history of Craters of the Moon, but they seem to be doing quite well by National Park standards. There is a well-appointed visitor center and both the overnight camping and day-use facilities were some of the best I've seen at a National Park. I wouldn't go out of your way to visit this site, but if you're in the area, and you have an interest in the history of nuclear power (and who doesn't?) stop by and check it out. My sister and her family stopped her for a purported 15 minutes, including bathroom breaks, and left unimpressed. Determined to find some redeeming qualities due to my faith in the National Park System, I gave it a good 18 hours and have filed this report. 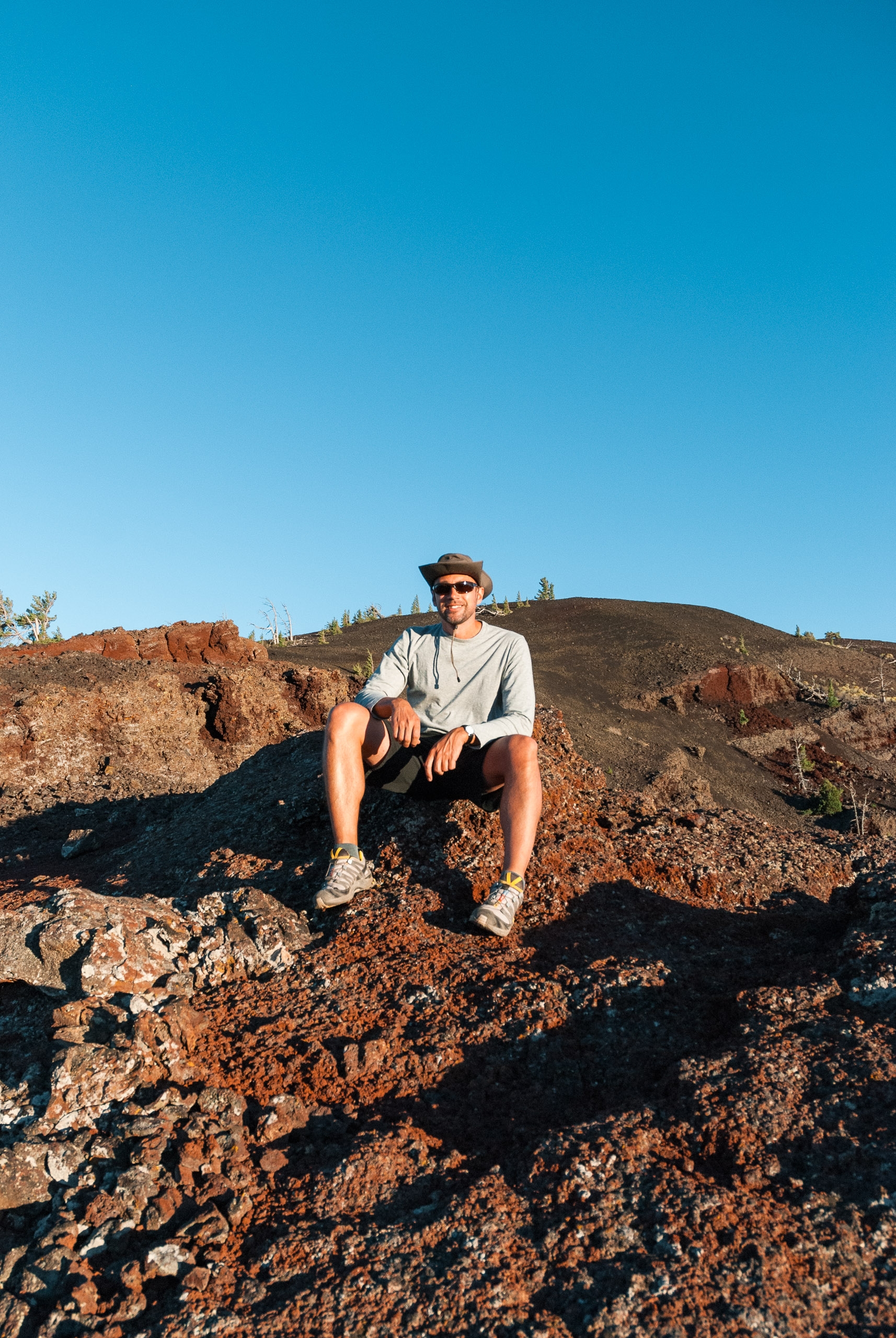