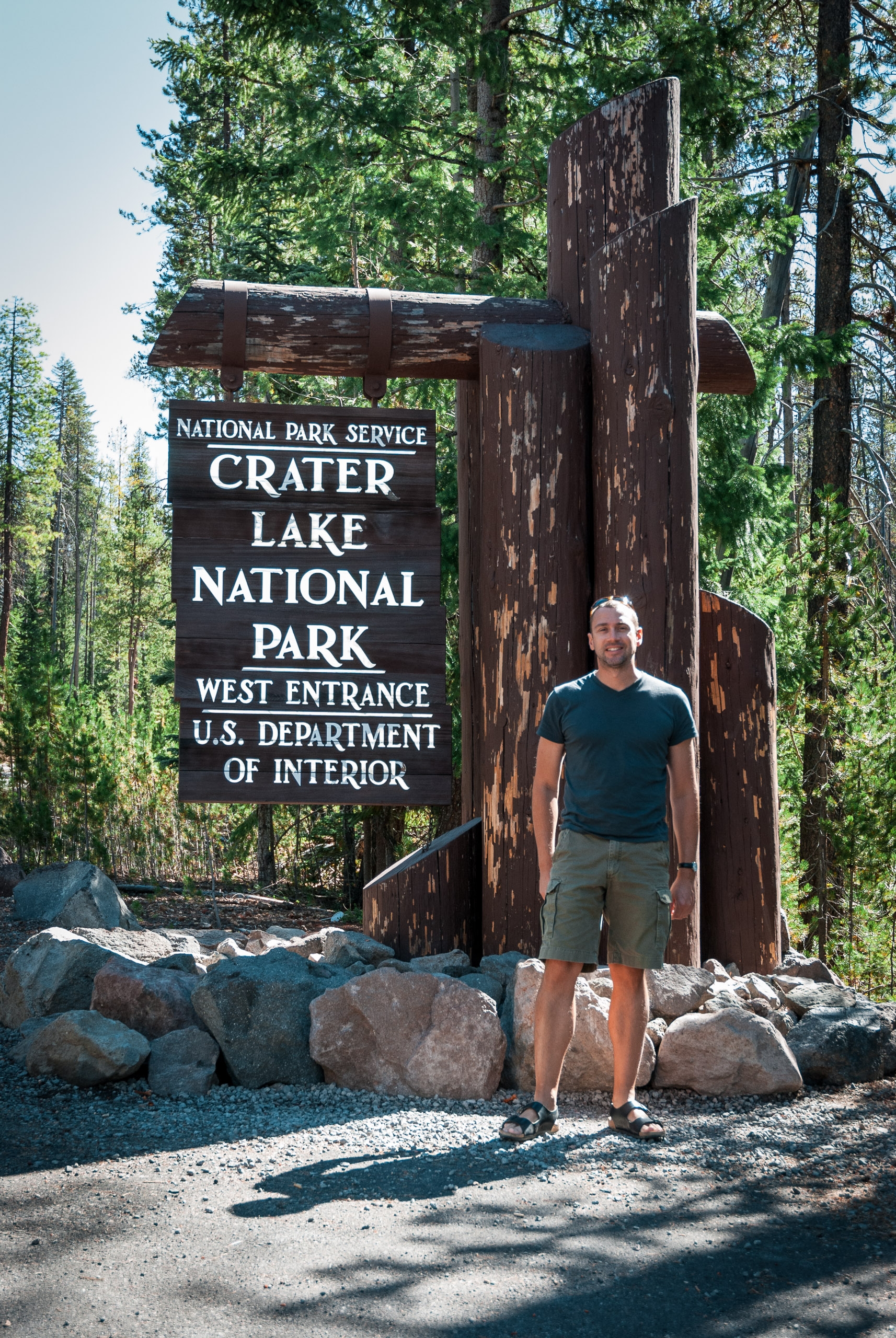 The second stop on my national park tour is Oregon's Crater Lake National Park. Despite being and living in the area for some time, I had never visited this site before yet had heard consistently rave reviews (especially from Matt Poehler and Peter Warner). I wasn't disappointed.

I drove up from Mt. Shasta to Southern Oregon, stopping in Ashland to try to determine why the Shakespeare Festival there is so popular. I wasn't successful in doing that, but it is a nice little town. From there I headed to Medford where I stopped for the night. I may not be the smartest Travel Blogger in the world, but I did stay at a Holiday Inn Express that night, and for $79 it was...worth the money. I used the stop to reconfigure my packing and pick up some things I had forgotten. I supposed it would have been an interesting challenge to subsist on only those items in the car when I left the house, but what's the point of that? I've already "demoted" some of the gear I brought, deeming it unlikely to be used. The CRV has a second trunk below the back trunk (used for an additional spare tire, I guess), which is now the repository for things its nice to have but will unlikely be needed. Finally, I got really dirty, sweaty and dusty hiking all over Lassen and figured my sleeping bag cost a lot more than that $79 hotel room. Plus it was nice to eat food off a plate.

From Medford the park is about a 2 hour trek up a windy, tree-lined road. Leaving Medford my cellphone lost reception and wouldn't get it again until I got to Baker City outside of Idaho, about 2 days later.

The park itself is not large by national park standards, about 180,000 acres in total. Once inside the main entrance, its a short trip to Rim Drive, a two-lane road that circles the lake affording pretty astonishing views at every turn. At the rim of the crater from the main road, is Rim Village and the Rim Lodge, both connected to Rim Drive (see a theme here?). The lodge is a nice old Alpine hotel, characteristic of those built during the Works Progress Administration. It strongly resembles the lodge atop Mt. Hood, which you might recognize as the location for the exterior shots of Stanley Kubrick's film based on Stephen King's The Shining. Across the parking lot of the main lodge is your first view of the park's main feature, Crater Lake. 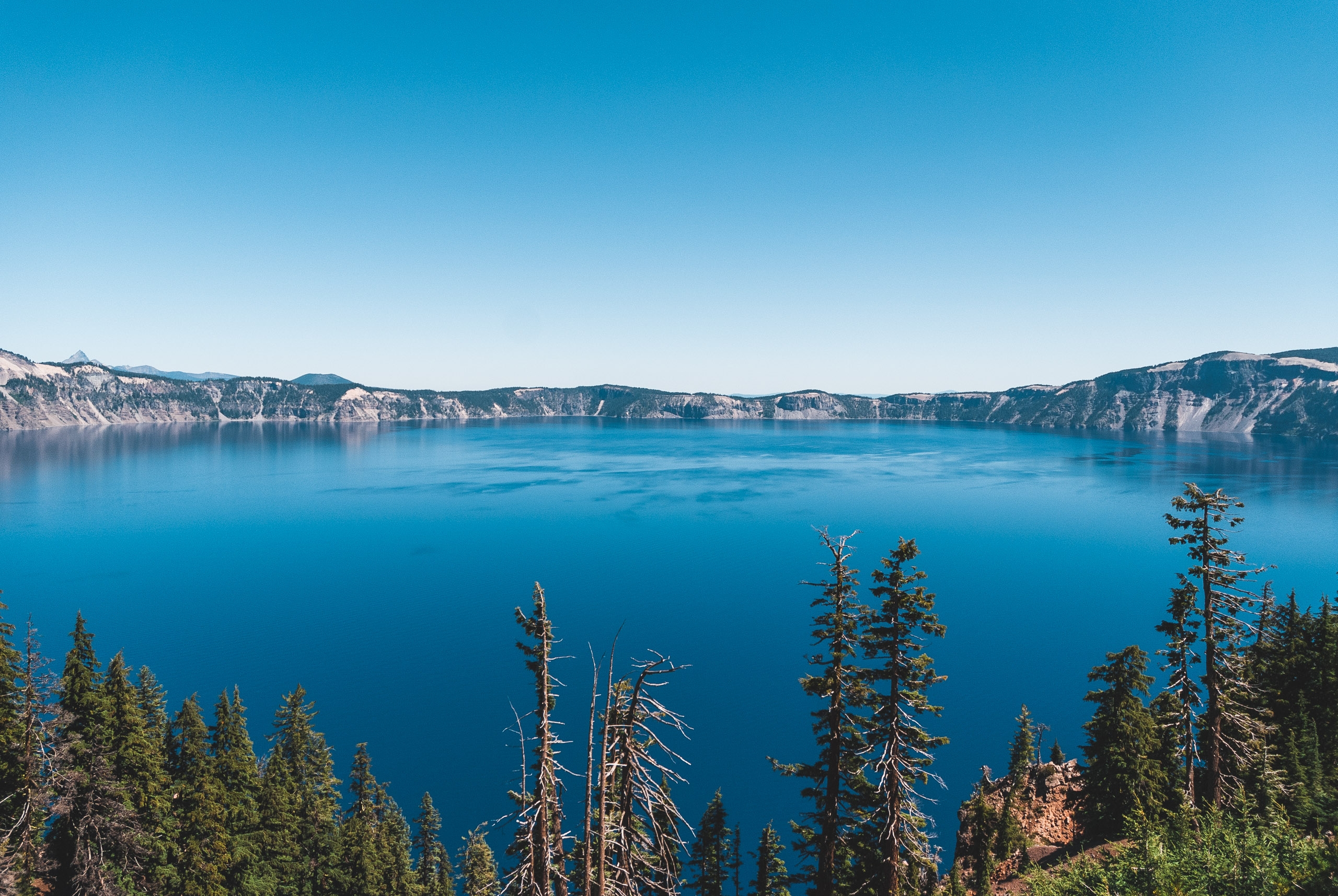 The view of Crater Lake from Rim Village

Crater Lake is quite large - six miles across and at about 6,000 feet in elevation. As you approach the lake, you are instantly struck by its unique appearance and are immediately affirmed why this site was protected as a national park. Its hard to describe how blue the water is, but see the photos below. I should note that none of these photos were color-corrected or adjusted. People talk about how blue Lake Tahoe is, but compared to Crater Lake, Tahoe is a toilet. The lake has many unique features. At 1,943 feet deep, Crater Lake is the deepest lake in the United States, second deepest in the Western Hemisphere (only Great Slave Lake in Canada is deeper, but its Canada so who cares) and seventh deepest in the world. The lake is also a closed system, meaning no water flows into or out of the lake. When you stand on the rim and look around, you'll notice that there are no fissures or imperfections in the crater rim that would allow water to transverse the lake boundaries. The lake is also an almost perfectly balanced system, where annual rain and snowfalls are almost exactly offset by evaporation. In over 100 years or recorded history, the lake's water line has never varied more than 3 feet. Because of the water's exceptional clarity, depth and temperature (averaging 36 degrees), the light reflected is an indescribable shade of blue. There are no native wildlife species in the lake. However, several varieties of fish were introduced around the turn of the century. Only some salmon and rainbow trout remain today, and because they are considered considered to be "exotic" species, the Park Service does not require fishing licenses in hopes of eventually removing them from the lake.

To appreciate the appearance of the lake today, its important to understand the history of how the lake was formed. Crater Lake is actually the remains of a once-giant peak called Mt. Mazama. Like all peaks in the Cascade region, Mazama was volcanic in origin and swelled to a height of over 12,000 feet as recently as 10,000 years ago. A giant magma chamber below the volcano was fed by the subduction of the Juan de Fuca Plate as it slowly slid underneath the North American Plate. The pressures were immense and resulted in the ground bulging up above the magma chamber, until fissures in the Earth's crust allowed the magma to escape forming many of the peaks still visible today. Mt. Rainier, Mt. St. Helens, Mt. Hood, Mt. Adams, Mt. Shasta and Lassen Peak are all remnants of the same "Ring of Fire" that fuels volcanoes across western North America and the Pacific Rim. About 7,700 years ago, Mt. Mazama began a series of violent eruptions across multiple magma vents. These eruptions were so intense and so sudden, that the magma chamber below Mazama, once depleted, could no longer support the weight of the peak above and collapsed. In a dramatic chain of events, the peak fell below the rim of the modern crater, leaving a gaping 6-mile wide, 4,000 foot deep hole bounded by steep walls. Imagine placing a cone upside-down on a table with its point facing up. Cut a line around the cone about a third of the way up and remove the top. This is what remains of Mazama today. 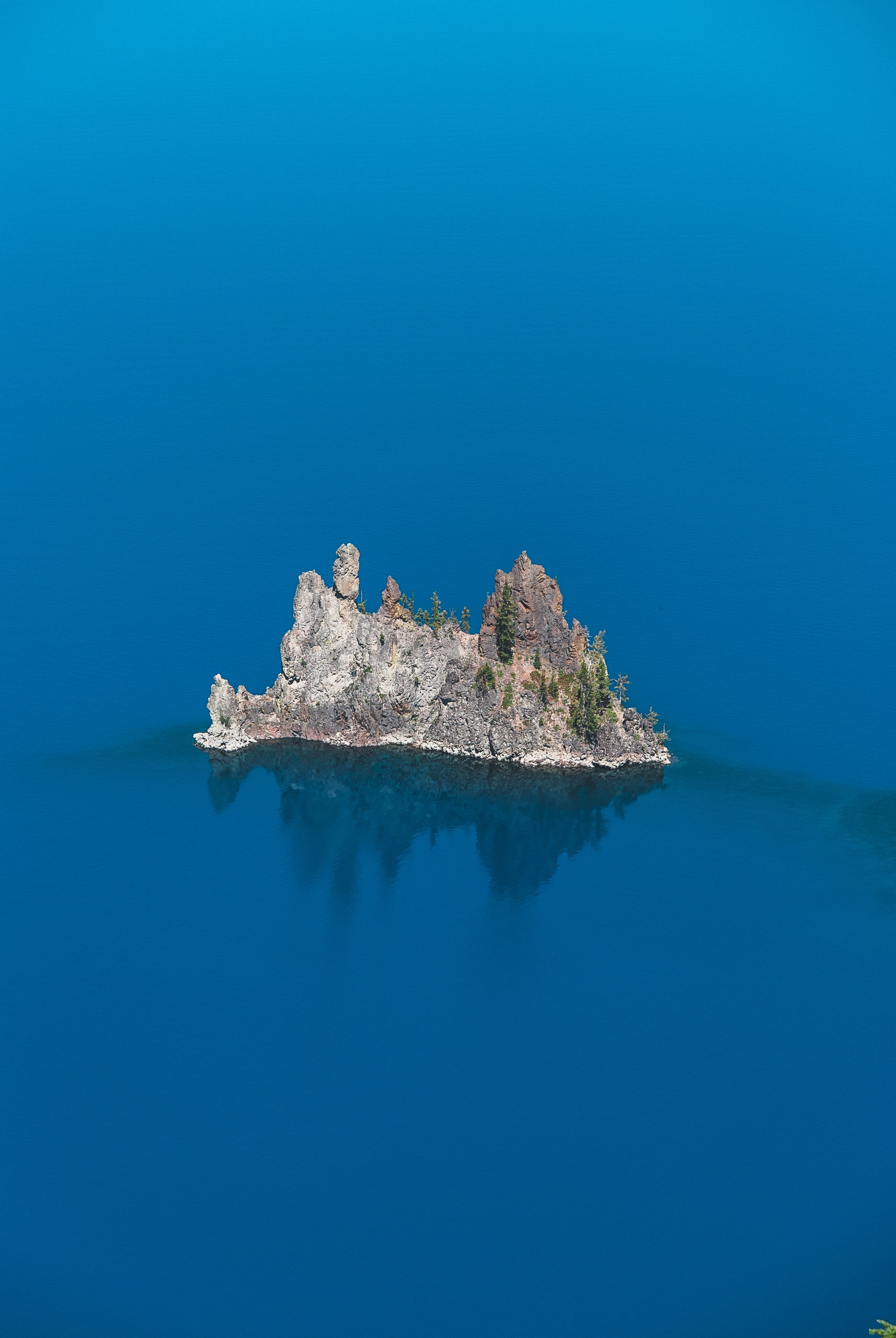 Phantom Ship, a rock formation which is one of only two lake islands.

Unlike a lot of geologic wonders visible today, its remarkable to consider that these eruptions and the mountain's subsequent collapse were so recent and so sudden. Native Americans living in the area at the time witnessed these events, and their account was passed down until the times of recorded history and even recounted today in the spoken lore by remnants of the Klamath tribes. It is told by them, and later confirmed by geologists, that the eruption and collapse of Mt. Mazama happened in a matter of days. Imagine seeing a 12,000 foot peak one day, a series of a violent, gaseous eruptions and then a 4,000 deep hole a few days later. As the crater cooled and volcanic activity subsided, save the for the formation of Wizard Island (the cone shape island within the lake, thought to be in the shape of a wizard hat), rain water and snow began to fill the caldron. It is estimated that the level of the present lake was achieved in about 800 years, and stopped rising once the equilibrium between precipitation and evaporation was achieved. 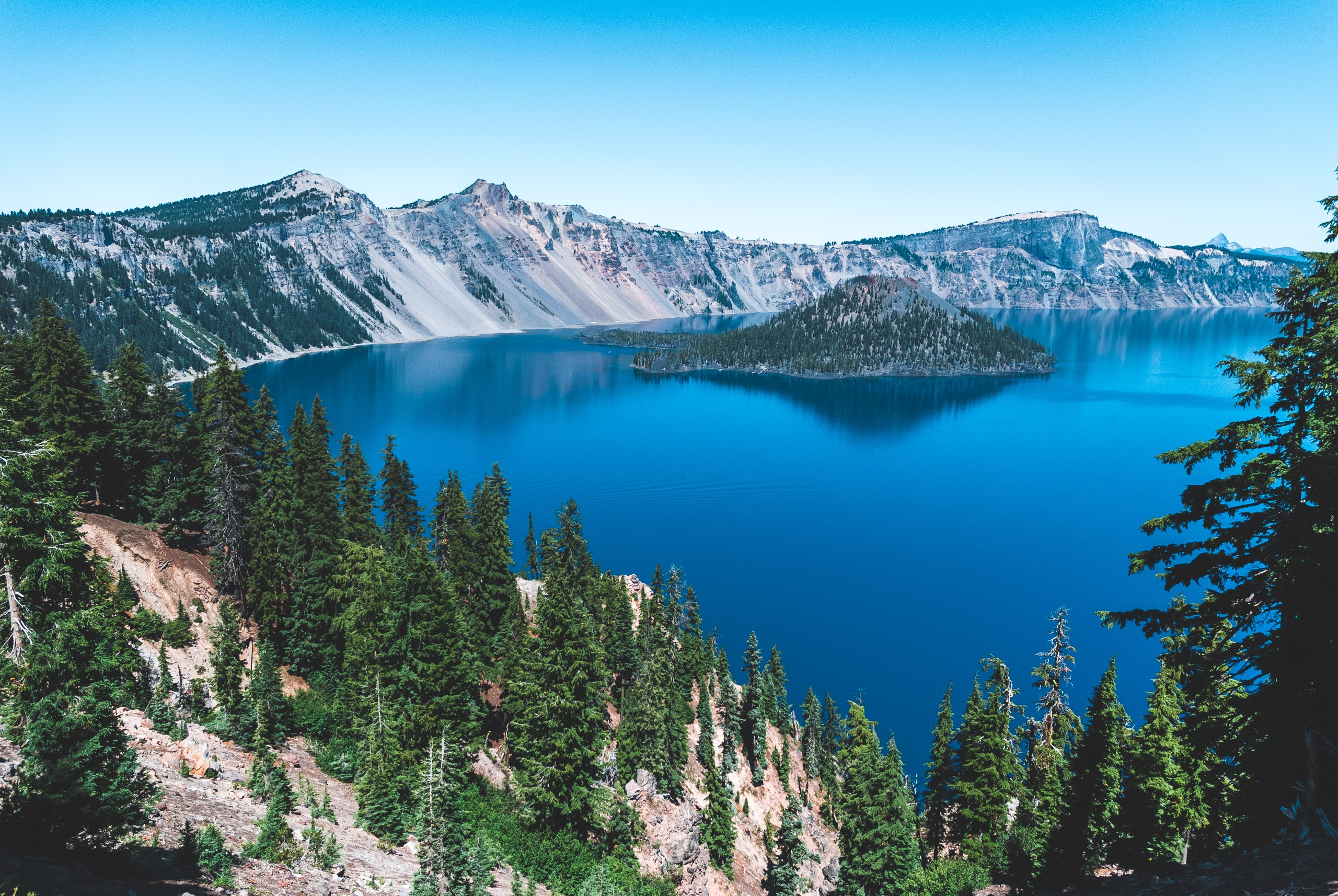 A view of Crater Lake including Wizard Island

I arrived in the park about noon, and drove down to the Rim Village. There are interesting exhibits on the formation of the lake (with some pretty cool computer animation) and another short film on snow removal. Crater Lake gets 500 inches of snow per year. Park crews begin clearing snow in April in hopes of opening the Rim Drive by June. From the Rim Village I drove east around the lake to the Cleetwood Cove trail, where I hiked down the waters' edge and took a dip.

The walls of the crater are so steep that it was once though impossible to safely reach the waters of Crater Lake. Standing anywhere along the rim its a bit dizzying peering over the ledge. There is only one legal access point to the water's edge, the Cleetwood Cove Trail, that descends about 2,000 feet over a half mile. Easy going down, but a bitch coming up. You can swim in the water here, or take a boat tour. I opted for the former. You climb to a height of about 30 feet and jump into water that, at the surface, averages below 40 degrees. Its quite exhilarating. I handed my camera to a fat guy so he could snap my picture as I jumped into the lake. I figured there was no way he could out run me going up that hill. My heart was still racing when I got back to the car. Some high school girls were there and also took the leap, but because they weren't dressed for swimming they lost the better part of what they were wearing. For those photos, please send me your credit card number. 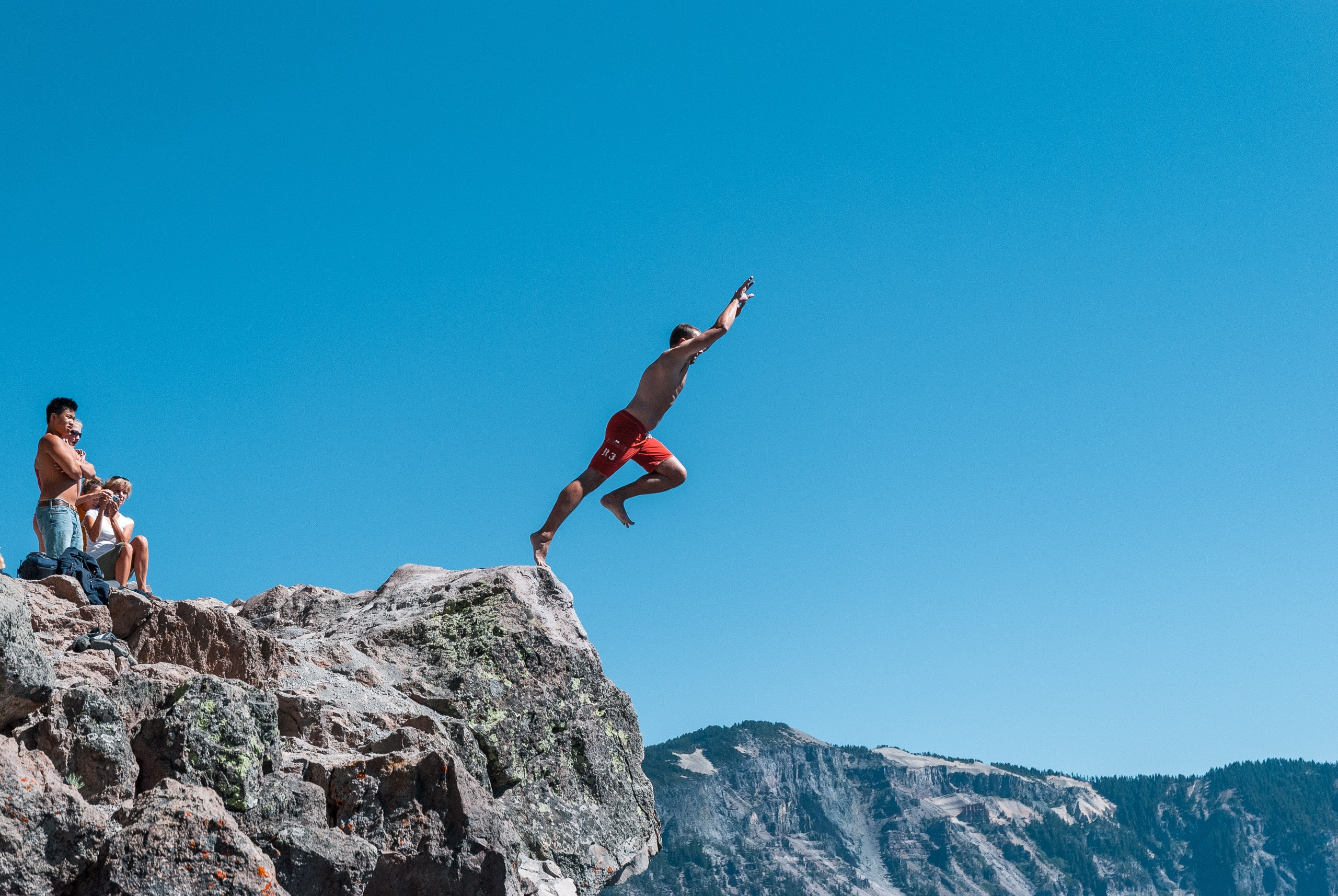 Me jumping 30 feet into 30 degree water.

Later that evening I hiked to the top of a peak called The Watchman to watch the sunset. The Watchman faces south and west, overlooking Wizard Island. There is US Forest Service fire lookout there, with an ample wrap-around porch from which to see almost all aspects of the park. The view was amazing, and I was joined by about a dozen others to watch the sun set and take photos. From there I went to the Rim Lodge and had a pretty respectable bowl of French Onion Soup, after which I camped. 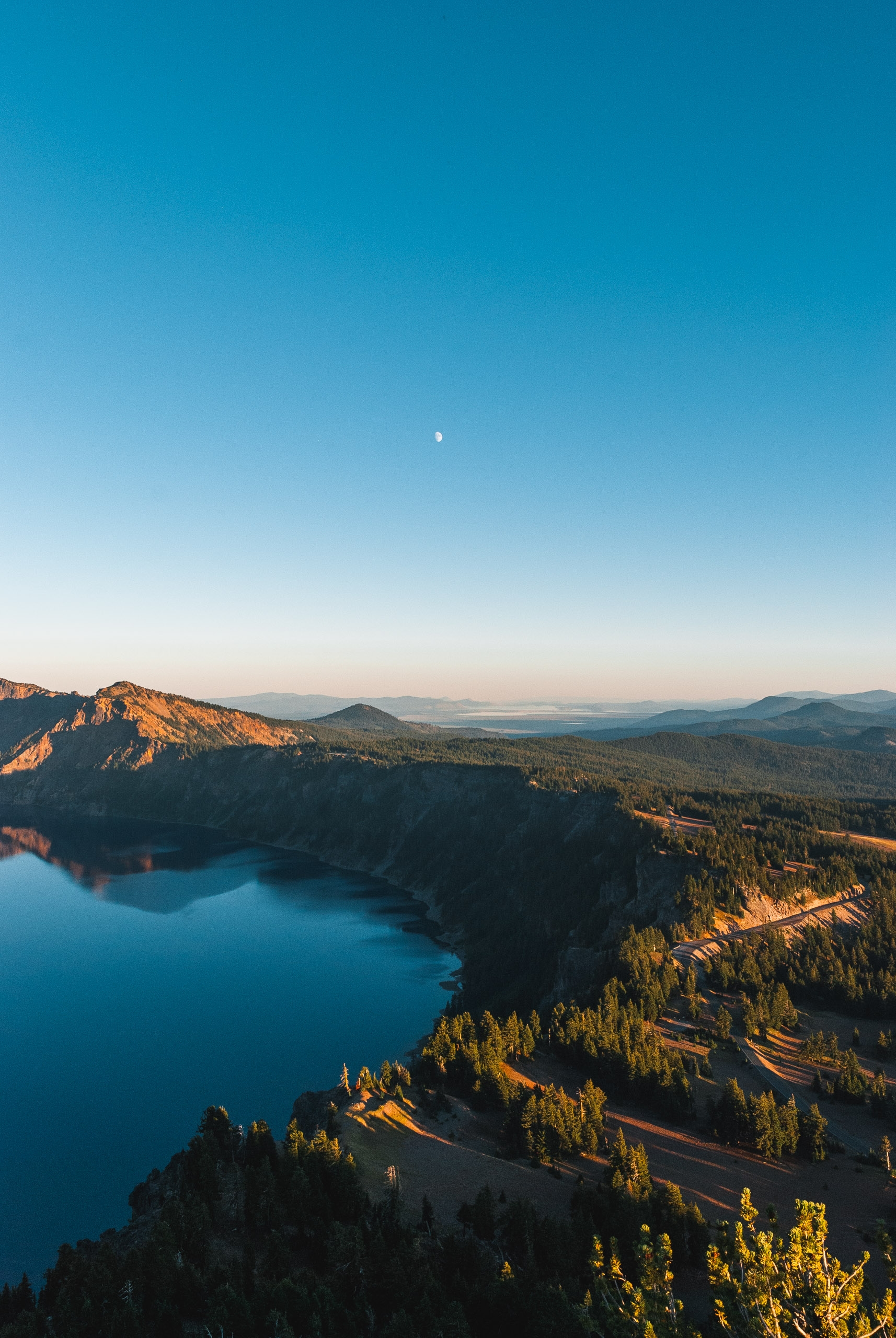 The slow sunset over Crater Lake 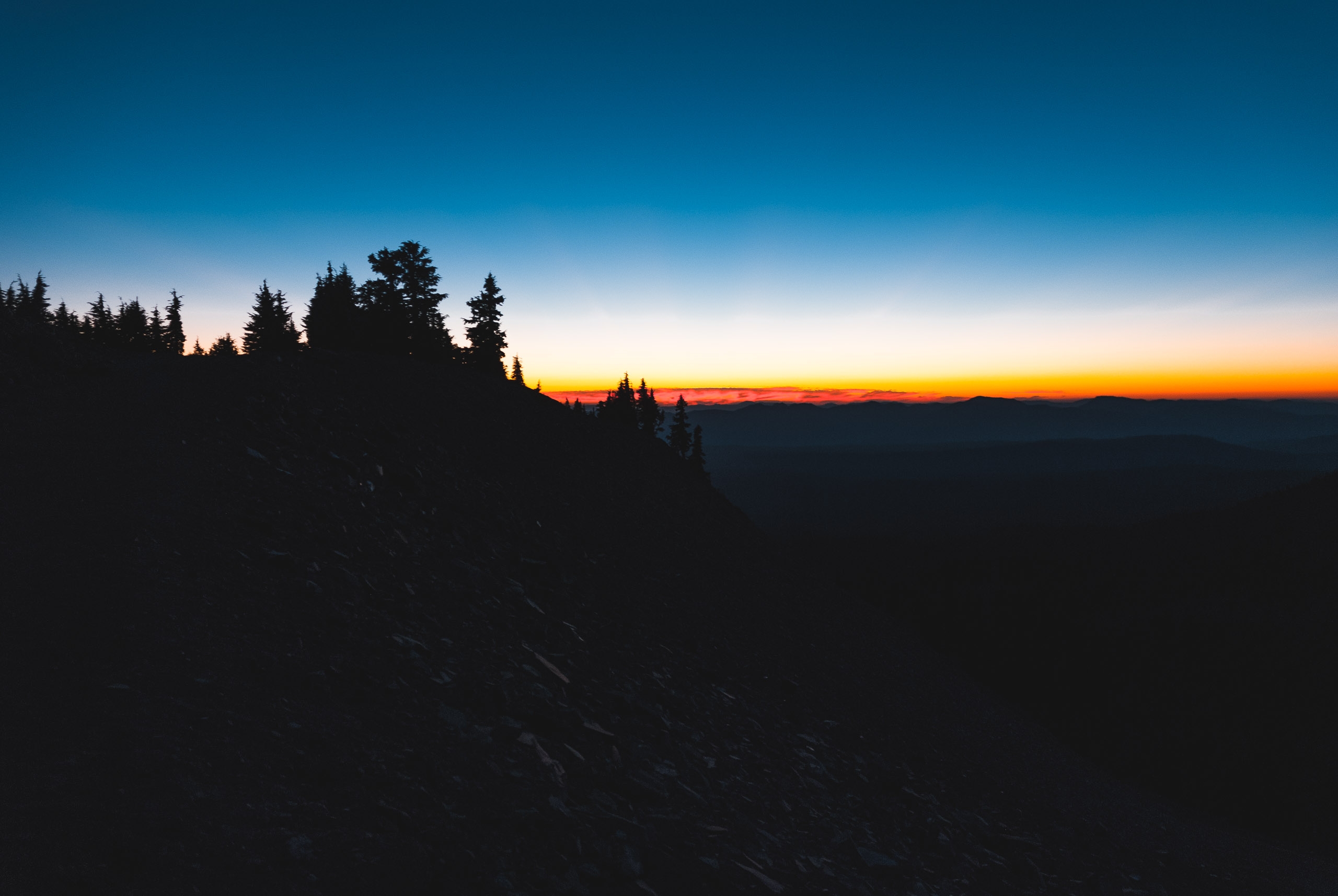 The remnants of the sunset as I got into my car.

The next morning I awoke around 4:00 AM and hiked to the top of Mt. Scott to watch the sunrise. Mt. Scott, at 8,934 feet, is the highest point in the park. The view from there is terrific as the lake is especially blue as you look West in the morning, and you have ample vantage over the surrounding valleys. I returned to the crater rim that morning, made some Peet's coffee then headed off to Bend, Oregon (where, by the way, I had lunch at McMenamin's Pub - Terminator Stout and The Communication Breakdown Burger. If you've spent any time in Oregon, you know what I'm talking about). 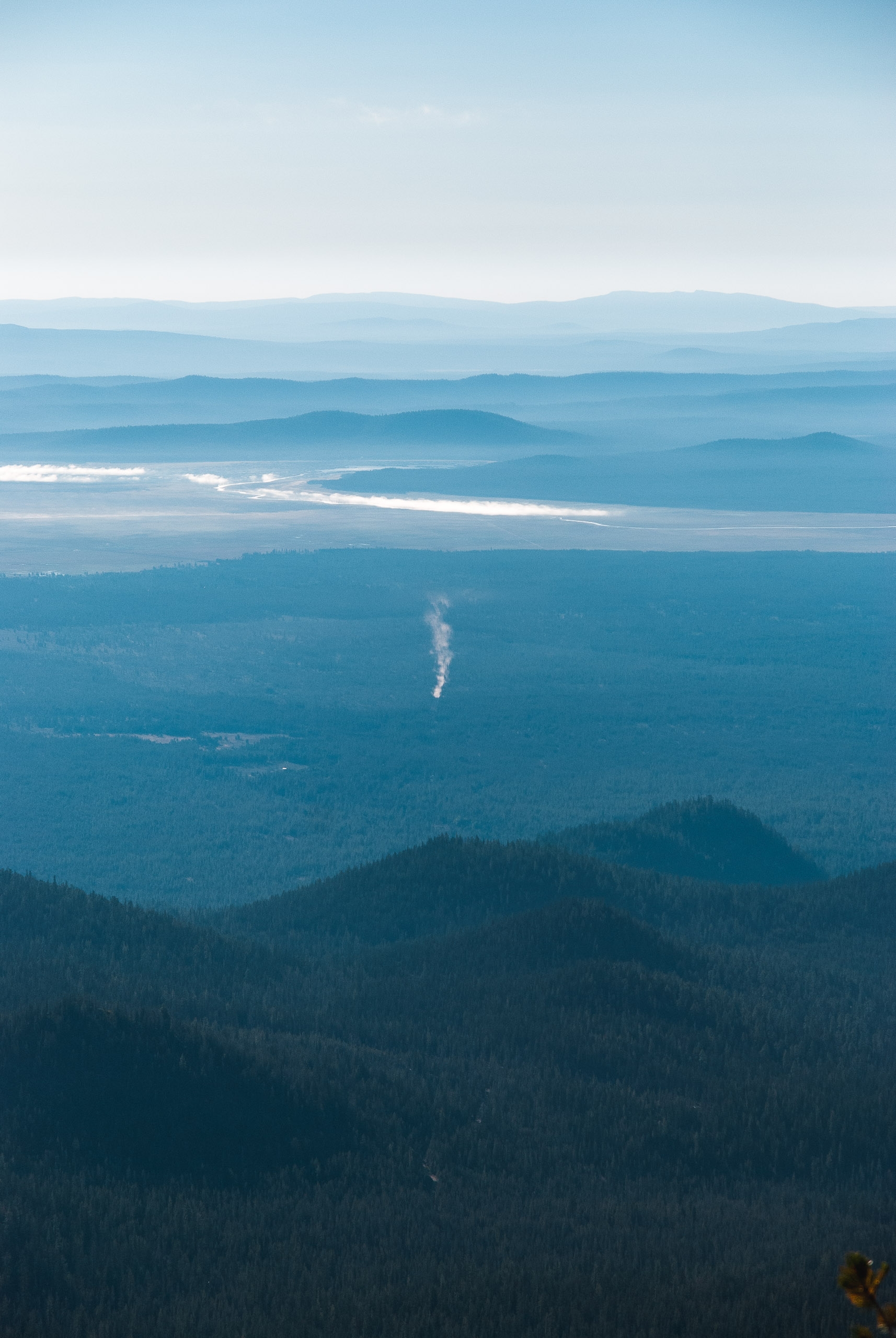 A distant forest fire seen from the top of Mt. Scott

I highly recommend a visit to Crater Lake. Its very accessible in that you needn't do dramatic hikes or climbs to really appreciate the park's main attraction. You can pretty much do it all in a day and a half, but it does take some resolve to go as there's not much in the surrounding area and its a pretty remote destination (about 8 hours drive from the Bay Area). However, if you're driving to Portland or to Bend for skiing, etc., you really do need to stop and check it out. 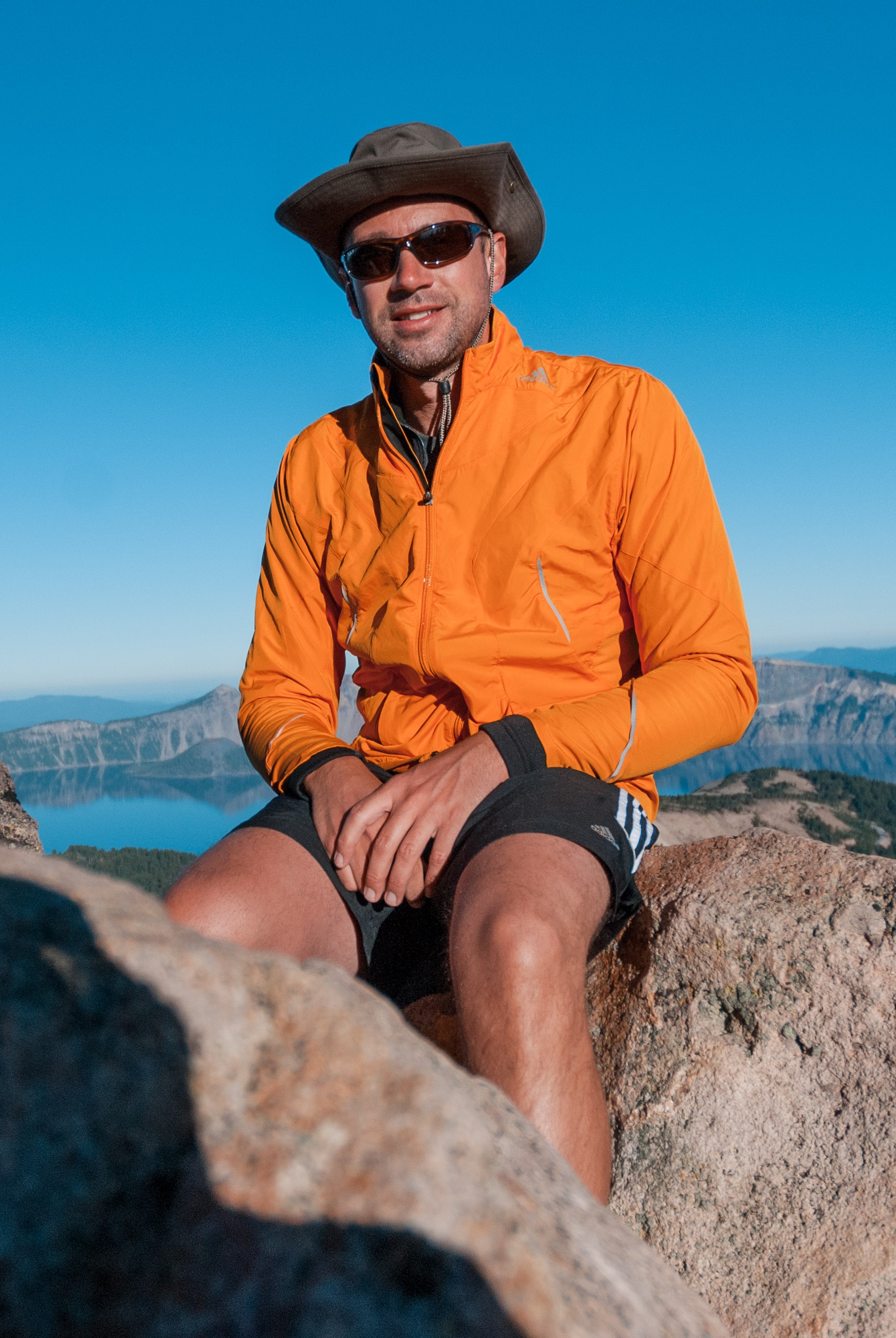